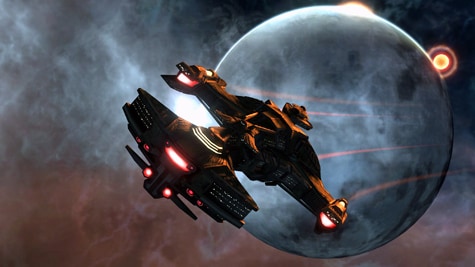 When the KDF became aware of the upcoming commissioning of the new Odyssey class ship, they rushed completion of the Bortas, in order to ensure Klingon dominance when it comes to space combat. The final stats are still classified and subject to last minute changes, but our intelligence group has collected the information below.

Not content to rest on their laurels, the KDF engineering teams at the Ty'Gokor Fleet Yards have been hard at work advancing Klingon ship design into the 25th century. When Chancellor J'mpok demanded a new, more powerful flagship to lead the Empire, they were ready with the Bortas, a ship that will bring swift vengeance to enemies of the Empire.

The Bortas Battle Cruiser is the largest, most powerful battle cruiser in the Klingon arsenal. Its massive hull affords it incredible resilience in battle, but it sacrifices turn rate for that size. It comes with a standard cloaking device, but its massive energy signature means the cloak is less effective than it would be on a smaller vessel. The Bortas is designed to take on any foe no matter how powerful, and because of that is designed with versatility in mind. It features a Universal Lieutenant Commander Bridge Officer Station that can be operated by any Bridge Officer class. It is also the only Battle Cruiser that features 4 Engineering and 4 Tactical console slots.