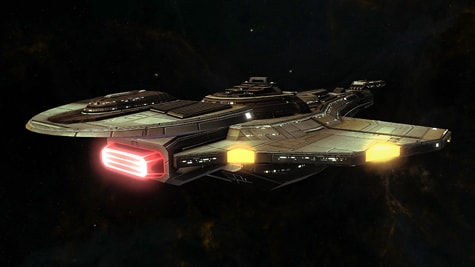 One of the rewards available from the Cardassian Lock Box is the Cardassian Galor Class Cruiser. This starship offers a unique flavor of play to cruiser combat for both Federation and Klingon factions. It also offers a unique weapon called a Spiral Wave Disruptor. This starship and its unique weaponry are certain to be in high demand for the impending re-ignition of war with the Dominion forces.

The broken alliance between the Cardassians and the Dominion was one of the pivotal conflicts of the Dominion War. Faced with the loss of a valuable ally and continued pressure from the allied forces of the Alpha Quadrant, the Founders were forced to retreat to a hostile Cardassia Prime where Damar led a popular revolt that sapped away Dominion soldiers and resources. This rebellion opened the door for the Dominion's ultimate defeat.

Recently unclassified documents reveal that during the rebellion, Damar arranged for a small surplus of Cardassian Galor-class warships to be given to both the Federation and the Klingon Empire to aid in their efforts fighting the Jem'Hadar. With the threat of the Dominion again looming, the Cardassian Detapa Council has finally agreed to release these forgotten vessels for Starfleet and Klingon Defense Force use.

The Galor is a cruiser, but smaller than many other vessels of its type. Its hull is not as strong as other cruisers in its class, but its smaller size makes it fast and maneuverable. It also has some of the best shields of any cruiser. The Galor class employs Spiral Wave Disruptor Arrays. This technology differs from standard disruptors by utilizing phaser technology as well. As such, it has the best properties of both energy types. Spiral Wave Disruptors have a chance to reduce the target's damage resistance and to damage a target's subsystems. They are also more accurate and deliver more damage than standard disruptors.

Spiral Wave Disruptor Arrays scale with your level and may be equipped on any starship.

Make sure to take a look at our Cardassian Lock Box FAQ here.