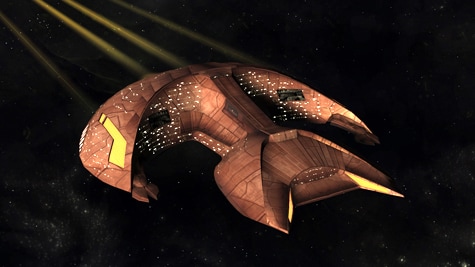 Due to a miscalculation on the Ferengi Futures Exchange in early 2409, Urata Manufacturing found itself with an excess of inventory and mounting debt. Desperate to stabilize cash flow, the company attempted to liquidize some of its remaining assets through quiet sales. When this didn't work, the leaders of the company cooked the books, shoving most of their remaining debt onto a little-known subsidiary that specialized in military ships. Then they spun that company, Sluga Military Technology, off as an independent manufacturer.

Burdened with Urata Manufacturing's old debts, Sluga seemed doomed to failure. Its stock price dropped so low that it was delisted off of the exchange. Most of the staff abandoned the company. Liquidators were expected any day. That's when the president of the company had a revelation. Half of the quadrant is at war, but the Ferengi Alliance is neutral. It isn't buying more ships for its military. So why not find a way to get these ships to people who need them? As the Rules of Acquisition say, war is good for business!

Armed with a unstoppable attitude and a few convenient loopholes in Ferengi law, Sluga Military Technology has teamed up Lobi Crystal Consortium (a wholly owned subsidiary of Quark Enterprises) to put new D'Kora Marauders in the hands of ship captains on the front lines.

Fully loaded and ready for battle, these D'Kora Marauders feature everything a Ferengi captain could want, from a Dabo table and onboard Bank, Mail, and Exchange access to the Battle Module 3000, a powerful piece of technology that gives the ship the ability to fire an EMP Burst that will drain power from pursuing enemy ships. But that's not all! When fully engaged, the Battle Module 3000 will transform the D'Kora Marauder, opening several ports and conduits and improving the ship's weapons and engines. The EMP Burst is disabled, but a Swarm Missile System is revealed. After all, "the bigger the smile, the sharper the knife"! 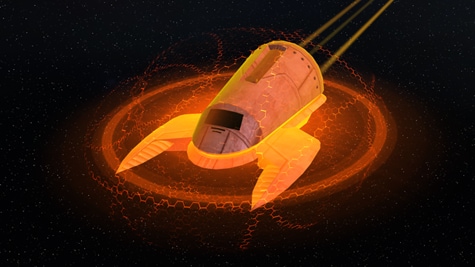 Ferengi Na'Far Shuttles provide profit-seekers an economic and stylish way to zip between investment opportunities at warp speed, without the overhead and crew costs of a full-size vessel. Although not equipped to stand toe-to-toe with most ships of the line, this stalwart vessel can hold its own against shuttles and fighters with ease. Fast and tough, it has bonus Hull Plating and Armor Reinforcements, bonus power to Engines, and is equipped with standard phaser defenses. It comes with a station for Ensign Universal Bridge Officer station.

In addition to its standard capabilities, Ferengi Shuttles come equipped with a Metaphasic Shield Array. Activating your Metaphasic Shield reroutes energy from all systems into shields, allowing the Na'Far shuttle to be extremely resistant to incoming damage while also converting a portion of that damage into additional shield power. Although the Metaphasic Shield only lasts a short amount of time, sometimes a few seconds is all you need to live to haggle another day!

All Na'Far equipment, including the Metaphasic Shield Array, can only can be used on small craft.