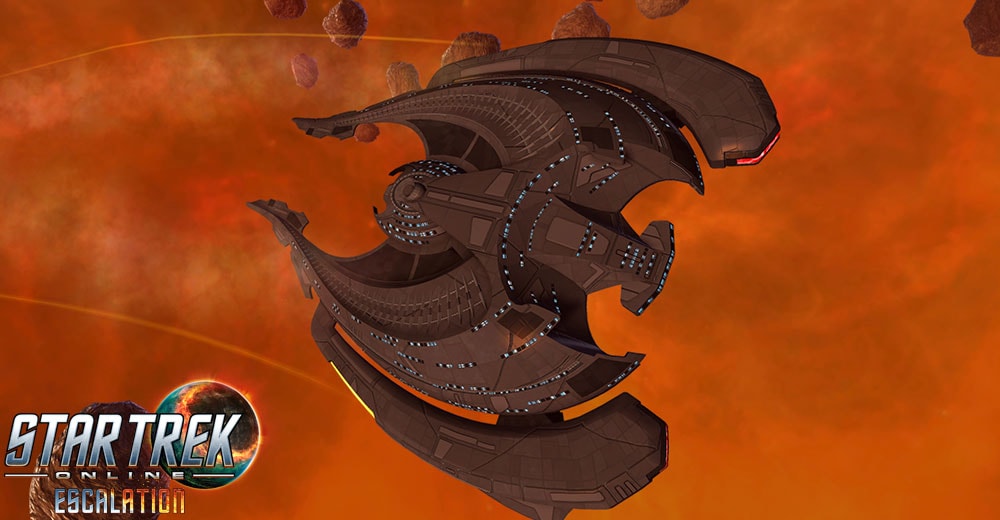 Since the days of the infamous Briar Patch Incident, the Son'a have earned the reputation as being outcasts of the Alpha Quadrant. Despite this reputation, there's no denying that the Son'a remain at the forefront of medical technology, as well as being in possession of incredibly powerful sensor and energy absorption knowledge. Using these advancements on their vessels makes them formidable foes, capable of outmaneuvering and debilitating most of their enemies. Research of the technology they use has allowed the Alliance to make significant advances in technology, the results of which are contained within.

Season 13.5 brings captains back to the Briar Patch, fighting – among other foes – the Son’a, made infamous by Star Trek: Insurrection. However, this time around, the Alliance has had close to a half-century to study the technologies and tactics that the Son’a use, to learn both how best to counter their insidious tactics and which of the best of their own tricks can be used against them. The fruits of this labor can be obtained from within the Son’a lock box.

Son'a Command Science Vessels come equipped with the Console - Universal - Deep Analytics Sensor Package. When activated, it emanates a field 3km in every direction, which lasts a moderate duration. All allies within this field, including yourself, are granted increased Shield Penetration and Armor Penetration as long as they remain within the field. Meanwhile, all foes within the field will have one beneficial effect removed every second (starting with the longest remaining duration).  These enemies will also suffer penalties to ability recharge times.

This console also provides a passive boost to Maximum Auxiliary Subsystem Power, Control Expertise, and Shield Hardness.  It may be equipped in any console slot on any Son'a starship. You may only have one of these consoles equipped at a time.

The release of the Son’a Lock Box also brings the Son'a Intel Battlecruiser [T6] to the Lobi Store in Star Trek Online.  These powerful vessels are the vanguard of the Son'a fleet, capable of withstanding heavy fire while simultaneously undermining their foes' ability to put up a strong fight - all without sacrificing offensive firepower.

Son'a Intel Battlecruisers come equipped with the Console - Universal - Subspace Barrier Agitator. Building from their knowledge of dangerous subspace weaponry, the Son'a developed this specialized piece of deflector technology capable of analyzing localized space near an enemy to find weak points in the barrier between normal space and subspace. Then, using an automated quantum drill, these weak points are violently torn open to create volatile anomalies that will seek out enemies and damage them while draining their subsystem energy.

In addition to the ships listed above, the Son’a Lock Box also contains the Console - Universal - Sensor Burnout. This power console passively strengthens your drain abilities and increases your chance to critically hit foes, and, in addition, comes with a powerful active ability that burns out the sensors of foes in front of you.

But there’s more to the Son’a Lock Box than just ships and their associated equipment! Not all of the Ba'ku embraced their technology-free lifestyle. Some chose to join alliance worlds and lend their skills. These brave Ba’ku are available from the Ba'ku Duty Officer Cadre, which features a number of popular Duty Officer Roster Active Powers. 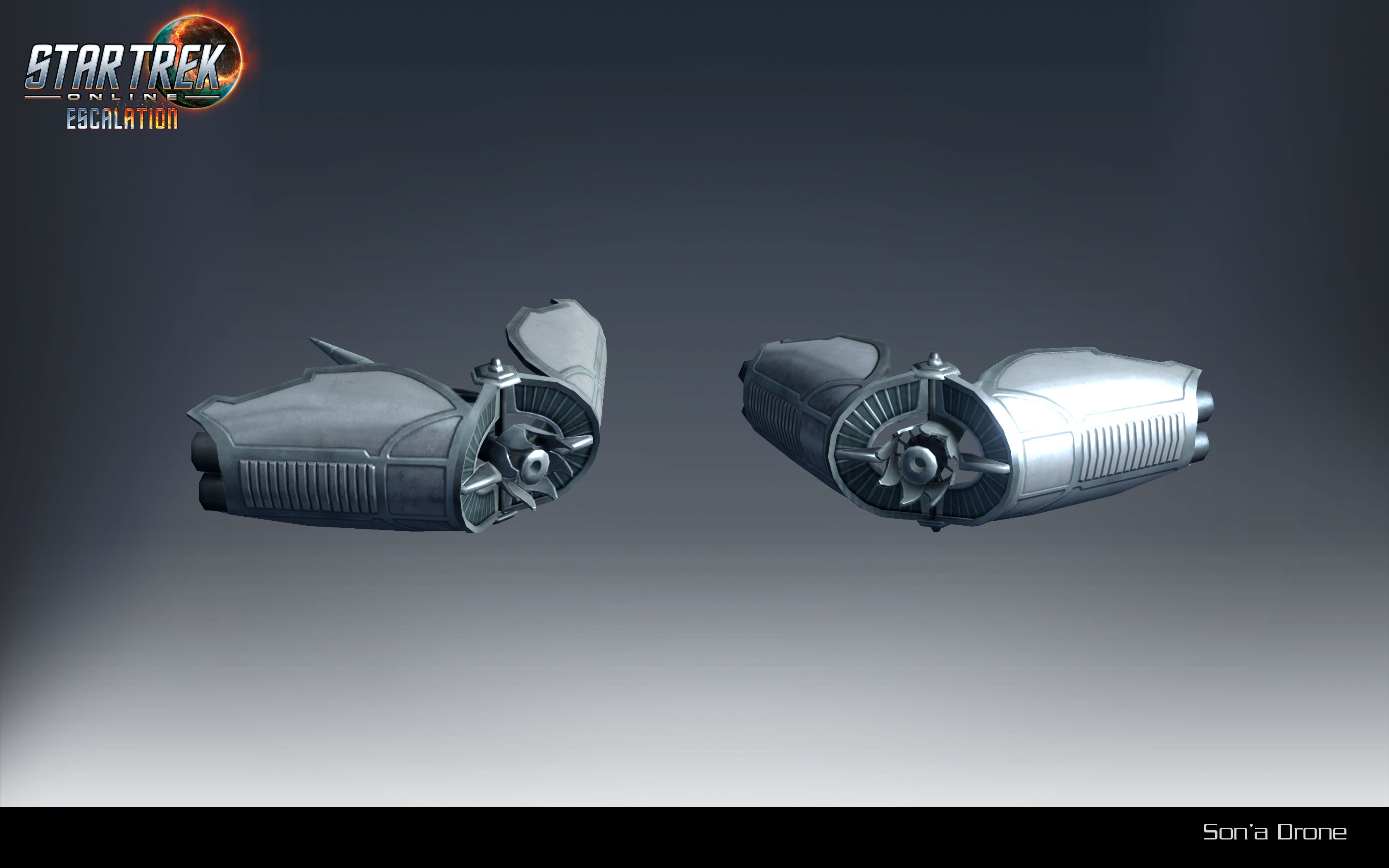 The Alliance’s best have also been experimenting with and adapting the Son’a Technology and the technology used against the Son’a for more varied uses, and some of the fruit of that labor is new Kit Modules: 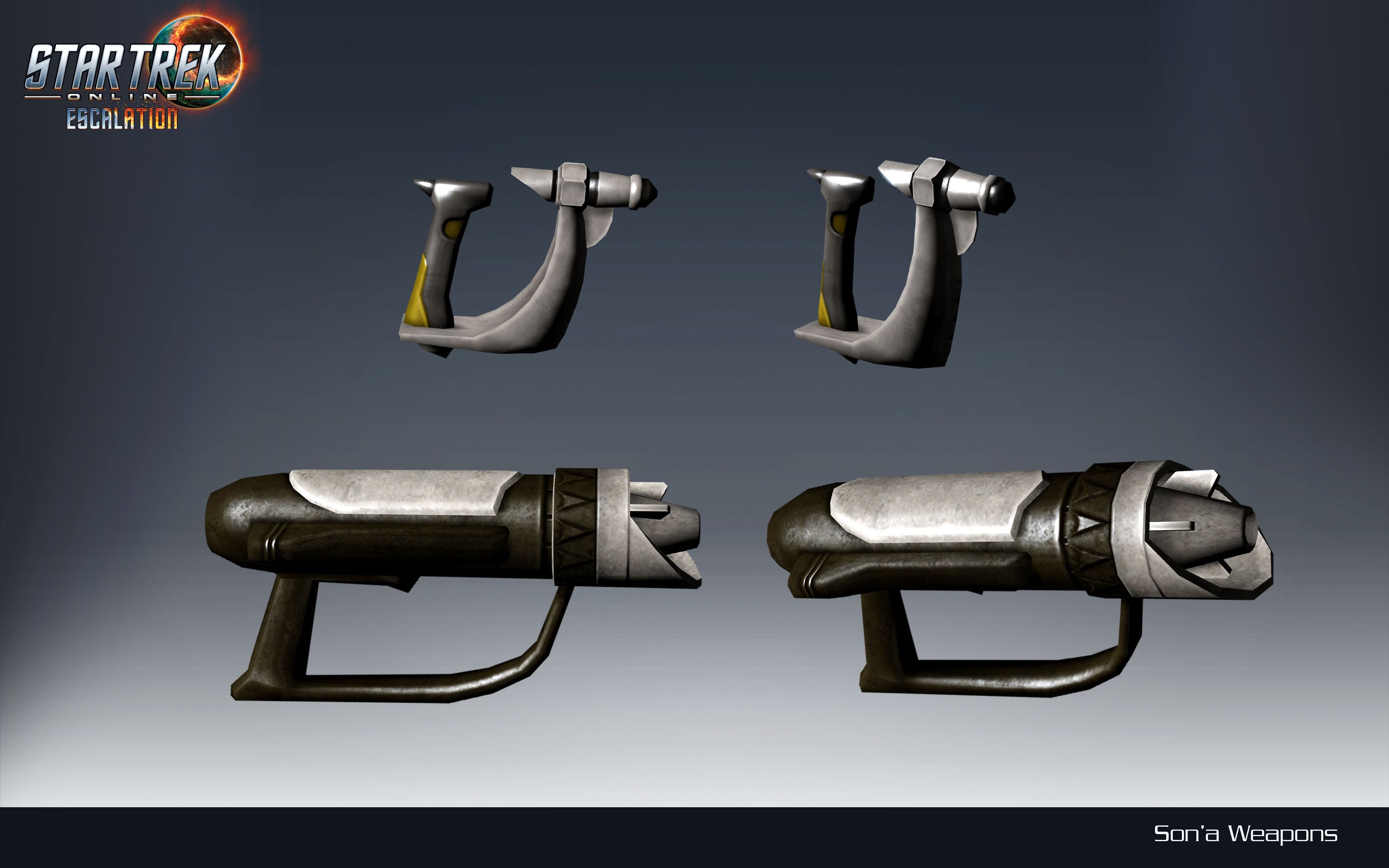 Rounding out the offerings of new equipment will be new unique Space and Ground Weaponry. When opened, each Isolytic Plasma Weapons Pack will offer the player a choice between Space Beam Weapons, Space Cannon Weapons, or Ground Weapons. Isolytic Plasma Weaponry has a chance to deal plasma damage to the target and pull enemies towards the target hit.

The Advanced Isolytic Weapons, in addition to their normal effects, have additional Armor Penetration every time they critically hit, and have a high amount of innate critical chance. Combining two pieces of this set will grant an increase to Tricobalt Projectile Damage and Plasma Directed Energy Weapon Damage, and combining 3 pieces of this set will grant boosts to your Kinetic Damage Resistance Rating, Weapon Specialization, and Hull Penetration. 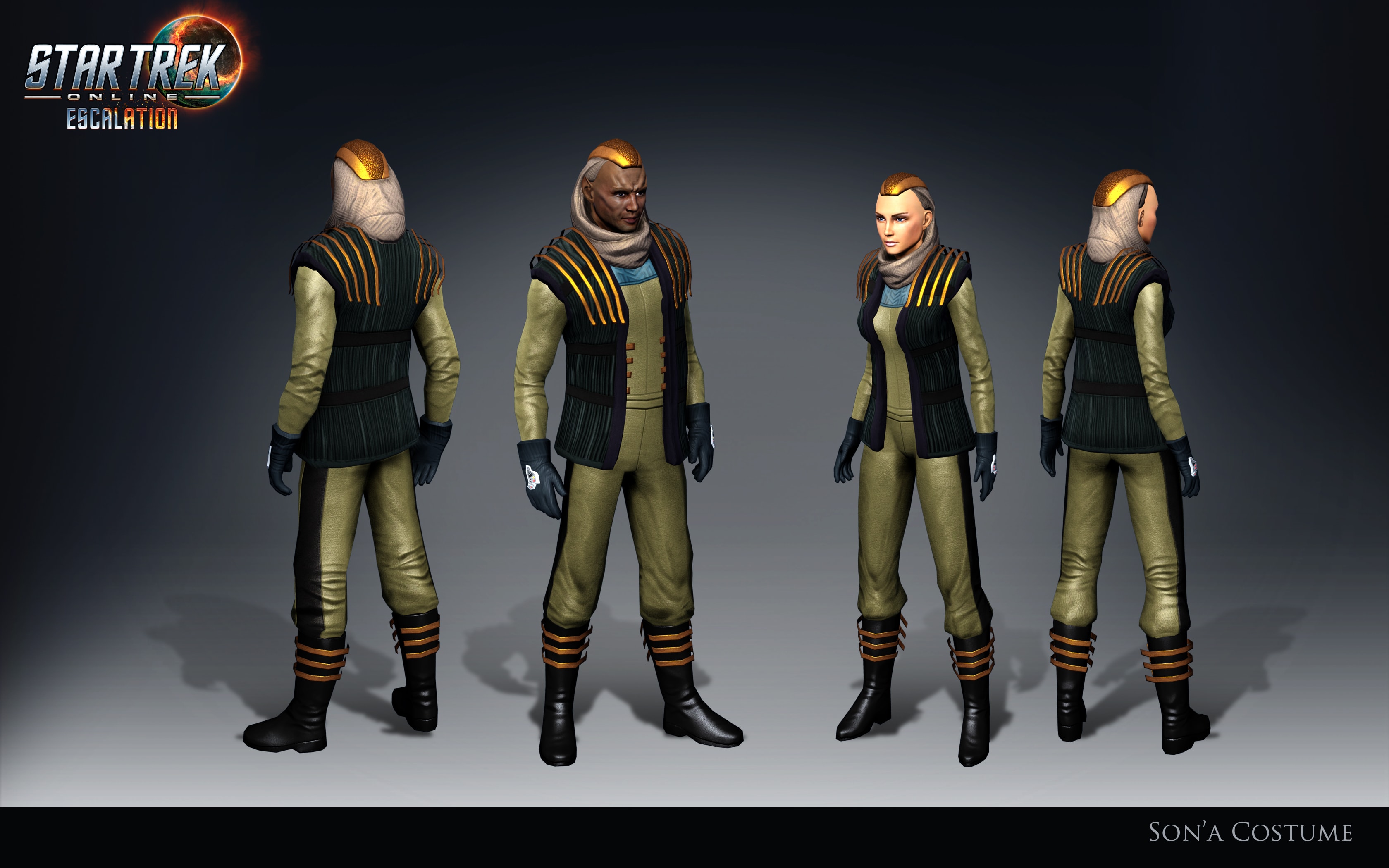 For those captains more minded towards fashion, the Son'a Outfit is available to captains of all factions, and will allow you to have a look similar to that that the Son’a had in Star Trek: Insurrection.

For those captains who are looking for more tools to fight the threats out there, the Son’a Lock Box and the new offerings appearing on the Lobi Crystal Store will be coming to PC in the near future.