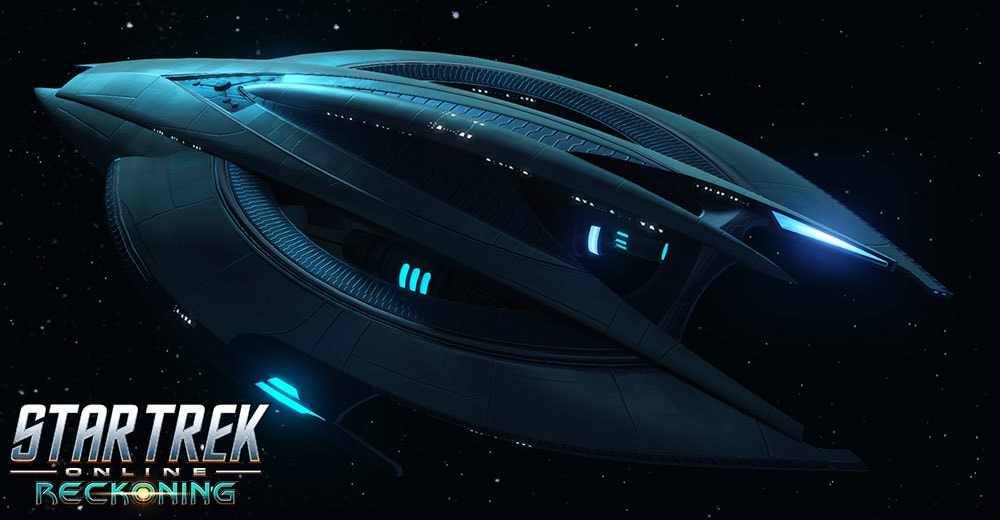 We’re very excited to announce three new Tier 6 Escorts, one for each faction.  These starships are available in the C-Store and can be purchased by level 50 players (Vice Admiral and Lieutenant General ranks).

Starfleet will gain access to the Caitian Shikaris Escort.

Romulans will have the opportunity to captain the Reman Hathos Warbird.

Each of these Escorts will have a Fleet variant made available upon release. In addition to the standard Starship Trait and Console, these escorts have a special Heavy Weapon Equipment Slot.

This new inventory slot and item is being introduced to reinforce the damage role of starships that possess them and can significantly improve your starship’s damage output (especially after being upgraded).

This starship comes equipped with a Railgun Destabilizer Module Universal Console. Activating this console will cause your starship to overload its Railgun and deliver a withering barrage of explosive projectiles at random nearby enemies. Each projectile deals heavy kinetic damage in an area of effect with a small amount of shield penetration. If your hull strength is low at the end of your barrage, you will receive a large increase to your flight speed, damage resistance rating, and defense for a brief time. Otherwise, your Railgun Barrage ability's recharge time will be reduced slightly.

After achieving level 5 in your Caitian Shikaris Escort, Ferasan Slithus Escort, or Hathos Warbird, you will unlock the Hit and Run Starship Trait. While this trait is slotted, Evasive Maneuvers will provide a very high damage resistance rating buff. When Evasive Maneuvers expires, you'll receive a weapon damage and critical hit damage buff for a short time.

These starships are available in the C-store individually, or they can be found packaged together in the T6 Allied Escort Bundle.