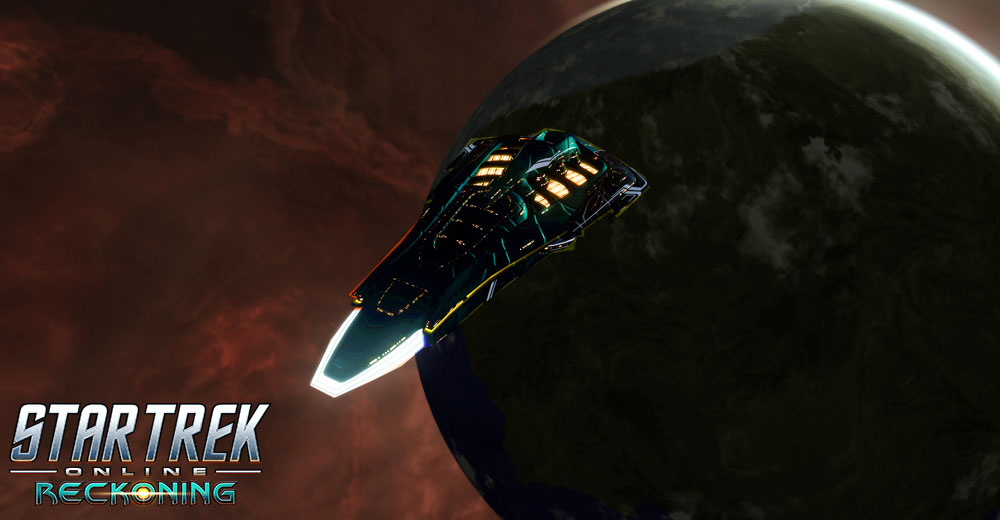 We’ve arrived at Tzen-designated system Kzuuln. Our initial sensor sweep confirmed what the long-distance scans suggested earlier on – the fifth world in this system is filthy with the crystals. Per Autarchical Directive 4862, I have instructed the security force to prepare the weapon for deployment. Kzuuln-5 must be scoured.

Tzen-Tarrak shifted position slightly at his command lectern. Nearby, Prult, his science officer, peered at a monitor filled with data, telemetry, and tactical readouts for a moment before making a low rumble in his throat. I know that sound well, the admiral thought silently. He’s found something to complain about.

Sure enough, the science officer walked away from his bank of instruments and approached the command zone within the bridge of the Fearless. Here it comes, thought Tzen-Tarrak.

“Admiral, the aliens of Kzuuln-5 are transmitting signals to us again,” Prult said in measured, even tones. “The signals contain simple, yet basic mathematical calculations, along with a number of brief messages in four distinct languages. The universal translator has done its work – the messages are words of peaceful greeting and requests for civil discourse.”

“Predictable. Math: the universal language. The appeals for peace and diplomacy are a common response in the face of an obviously superior culture. Primitive, but sensible.”

“Should we respond, Admiral?”

“To what end, Prult? The data has been confirmed – the world is to be scoured. What would you have me do – tell them to make peace with their gods?”

Prult stared quietly at his commanding officer for a moment before responding. “You could establish contact with them. You could explain our presence, the threat we face, and how we plan to eradicate it. You could solicit their aid in the endeavor. You could show them mercy.”

“Out of the question. The Autarch’s orders are clear on this matter. We tried this before, remember?”

“But nothing. Dynaj-4. We showed them mercy. And how were we rewarded? Deception, lies! The Dynaji leaders smiled and feigned compliance while their lackeys hid as many crystals as they could.”

“The Dynaji used the crystals as a primary energy source! Their culture was heavily reliant on it,” Prult replied, his fists clenched. “Without them, their economy would’ve collapsed and their civilization would’ve fallen to anarchy! Of course they lied!”

“And for that, they paid the ultimate price,” the admiral said. “The Autarch’s will is not to be questioned.”

Prult gnashed his teeth in frustration. “These Kzuuln have no such reliance upon the crystals. They’re primitives – atomic power is the pinnacle of their energy system. Autarch’s teeth, some of them still rely on fossil fuels for energy! The crystals are just rocks to them, nothing more!”

“Admiral, we could make surgical strikes on the crystals with demolition teams. We could enlist the aid of the Kzuuln in this. We could spare this species!”

Tzen-Tarrak turned from his command lectern to face Prult directly, a hand coming to rest on his sidearm.

“There are many things we could do,” he said sternly. “Today, there is but one thing we will do, and that is to follow the Autarch’s edict on this matter. You are now relieved of duty.”

“A welcome relief from a reprehensible duty,” Prult said as a pair of security officers approached him. “There’s still time to make the right decision, Admiral… to walk the Path of Peace.”

“That time has passed, Prult,” the admiral replied. “Contemplate this in the brig, before your tribunal.”

Prult seethed as the security officers escorted him through the halls of the Fearless. Soon, the admiral would order away teams to the surface of Kzuuln-5 to deploy the dreaded weapon and scour every living thing from the world. Even the simplest of biological life-forms would be erased.

This cannot come to pass, he thought as he walked toward the brig. If I am the only one who sees the truth of things, then I alone must act. So be it.

With that, Prult rapidly spun in place, pummeling the guard to his right with a pair of back-fist strikes to several critical nerve clusters. As his paralyzed opponent slumped to the floor, the science officer executed a series of rapid kicks to the head of the remaining guard. The force of his blows drove her back into a bulkhead with great force, unconscious. Silently, he relieved each guard of their sidearm and sprinted to the nearest access tube way.

The security alert klaxon filled the air moments later. That didn’t take long, Prult thought as he scaled down the access ladder as fast as he was able. As he bounded from the tube way into an engineering deck hallway, a beam sizzled past his head into a bulkhead nearby. Don’t need a tricorder to know that wasn’t a stun shot, he mused darkly, firing a pair of shots in return, hitting a young ensign squarely in his center mass. Looks like the admiral’s skipping the formality of my tribunal.

Prult sprinted into the weapons bay where the Protomatter Bomb was stored. Held fast within a gravitic stabilizer field, the weapon of mass destruction hovered in the center of the chamber before the science officer. He moved to a nearby console and made a few adjustments to the field, increasing the gravitic level to maximum. He watched in silence and satisfaction as the forces of gravity crushed the deadly instrument… and then gaped in shock as his trained eye studied the debris field that remained.

No matrix emitter overload. No flux regulator explosion. Nothing but…

The hum of a transporter effect filled the air behind him, followed by the voice of Admiral Aarn Tzen-Tarrak.

“It was a decoy, Prult. You’re not the only officer aboard lacking the conviction to do what must be done, to obey the will of the Autarch and save the Tzenkethi people. I confess I never thought you would be the one to betray us all, however.”

“Sorry to disappoint you, Admiral,” Prult replied wearily as he turned to face the flag officer. “If there are others like me, perhaps one of them will bring you back from the path you now walk upon.”

“Like you, they will be found and dealt with accordingly,” the admiral replied coldly. “In the meantime, the weapon remains secure.”

“You think you will find glory on your path,” Prult hissed defiantly. “You shall find only madness.”

“And you shall find only the Void. Die now, in the Autarch’s name.”

A tetryon beam from the admiral’s sidearm coursed through Prult’s frame a moment later. As the defiant officer’s life came to an end, Tzen-Tarrak keyed his personal communicator to an active state.

“Tzen-Tarrak to Tac-Ops. Assemble the away team and prepare to deploy the weapon. We’ve been delayed here long enough.”