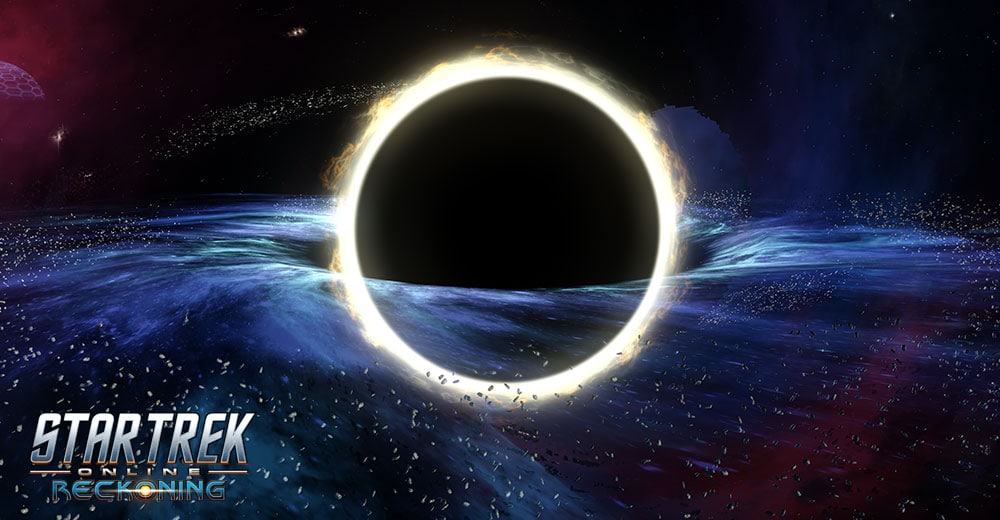 With the launch of Season 12, the Tzenkethi are bringing the fight to Captains on two new fronts. Here's all the details on our newest Queues, "Gravity Kills" and "The Tzenkethi Front."

To make their protomatter, the Tzenkethi must synthesize exotic particles from highly distorted areas of space. Their collection efforts have spurred them to create a microquasar hypermass—a compacted area of space-time that emits the necessary particles, with special facilities around it for collection and processing. Colloquially, they have created a black hole!

Join the I.K.S. Kor and the U.S.S. Jupiter in assaulting the Tzenkethi processing stations near the hypermass. Collect particles and fight off Tzenkethi ships so that Allied forces can disable the production facilities. Since the Tzenkethi factories are filled with volatile and dangerous protomatter that could have devastating effects in an explosion, use the hypermass itself to destroy them! But don’t get caught beyond the event horizon… nothing survives the tidal forces of a hypermass!

Gravity Kills is a new, five-player cross faction queue. This queue is designed for level 60 players, with normal, advanced, and elite versions.

The Tzenkethi have established a line of weapons platforms along the border.  They are slowly moving them forward, leaving world after world sterilized in their wake.

Their bases are practically impregnable, but our scientists have discovered a potential weakness. The bases are vulnerable to the Tzenkethi’s own protomatter weapons.

Our intelligence suggests the next place they will strike is the Eta Serpentis System.  The second planet in that system is inhabited. We must defend that world and stop the Tzenkethi advance.

The Klingons were able to complete a starbase in orbit of the planet to defend the planet from protomatter bombs.  Right now, that starbase is all that stands between the Tzenkethi and the extinction of an entire world. We must help them hold the line.

Defeat the Tzenkethi attackers, retrieve their protomatter bombs, and then fly them back to the enemy bases to destroy them. Be advised - the Tzenkethi will recover their bombs if you are defeated!  Eliminate their bases and force the Tzenkethi to withdraw from Eta Serpentis, before it’s too late!

The Tzenkethi Front is a new, five-player, cross-faction queue. This queue is designed for level 60 players, with normal, advanced, and elite versions.

We look forward to seeing you in game for the launch of the Tzenkethi Front!