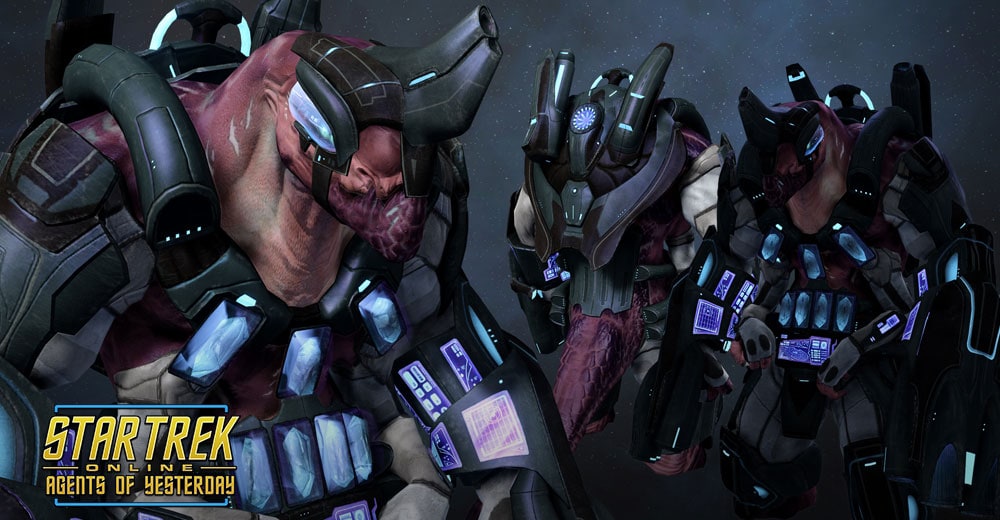 In the history of Star Trek Online, we don’t think there has been any enemy group as challenging to bring to life as the Tzenkethi. We explored a wide range of ideas from the “femme fatale” kind of alien to the current “brute” iteration. At some point the Tzenkethi had four, two, six legs and even tentacles. We ended up with the reptilian type, but we tried not to make them look like a generic reptilian. They have dragon-like heads, rhino-like skin and four arms. Two arms are really strong and two are weaker for nimble, precise handling. Their backs have a set of bony plaques that give the impression of a turtle-like shell, giving these already powerful creatures one less weak spot. Fully armored, each individual Tzenkethi resembles a walking weapons platform.

The Tzenkethi are a force that can match any member of the Alliance. They’re a militant warp-capable species, and they’re highly intelligent. From the beginning, we knew we wanted a fight with the Tzenkethi to be a fight you could get better at by knowing more about them. Your first fight with them will probably be your most difficult one.

What this meant was that they needed actions for many different situations. They will keep their enemies on their toes by being outfitted with technology that allows them to potentially deploy multiple types of drones, or fire a grenade launcher with multiple firing modes. Beyond this technology, the Tzenkethi needed to be resilient, but not a damage sponge.

We pursued what we called “smart-tanky”. We wanted their technology to lend itself to potential survivability, but all of it can be countered. 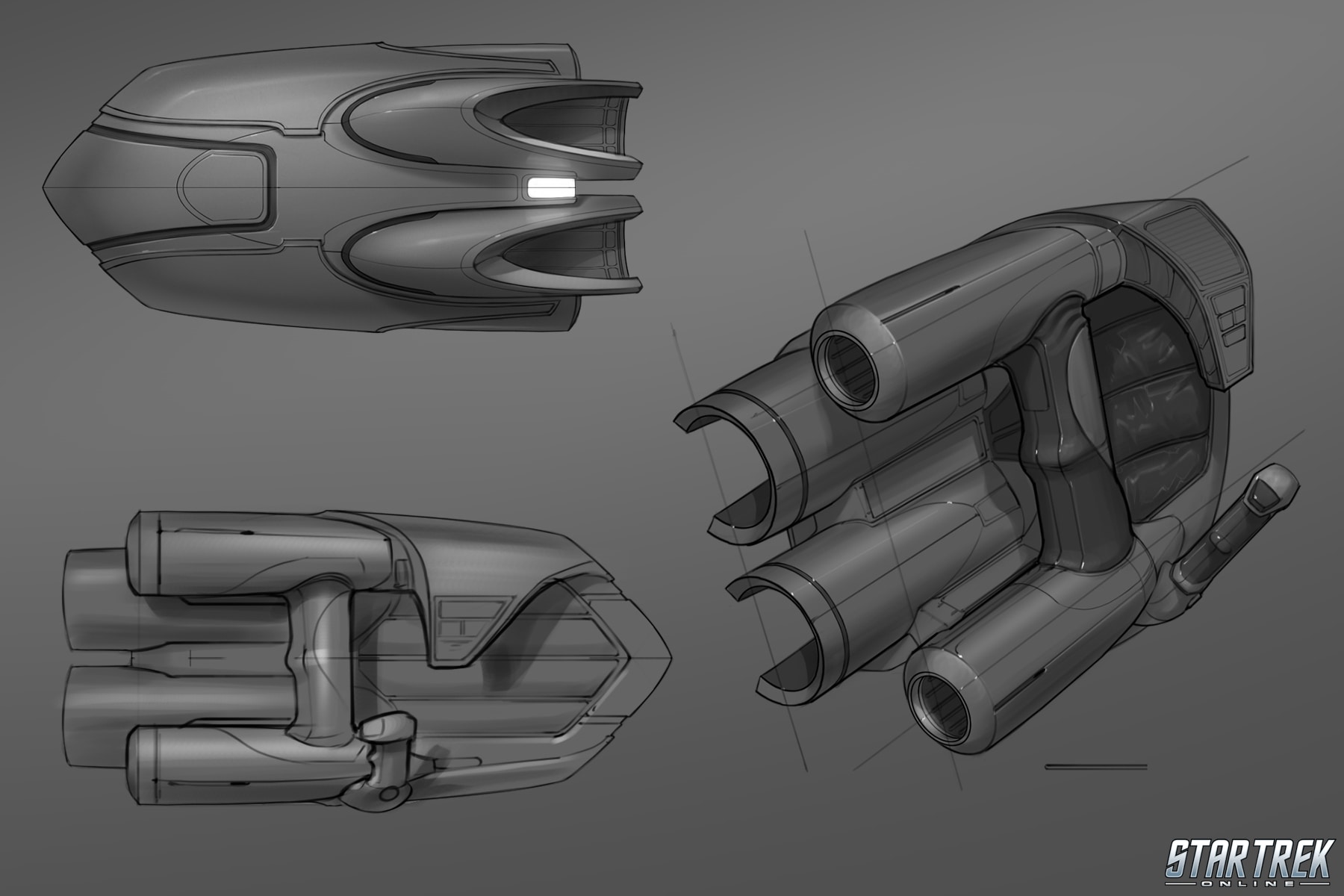 An example of this execution is their backpacks; based on protomatter technology, they are a strong power source for the Tzenkethi armaments. While alive, a Tzenkethi can utilize the technology that their backpack is equipped with for offensive or support capabilities. When a Tzenkethi falls, sometimes their backpacks remain in a powered state. This allows nearby Tzenkethi to reuse the incredible restorative power from it until the backpack’s power reserves are depleted.

Ultimately, the powerful stature of a Tzenkethi cannot be ignored. Proud, higher ranking Tzenkethi are outfitted with the best technology available. However, if they feel their technology isn’t getting the job done, you will often see them throw down their weapons and go in with their natural might to finish it.

We don’t want to spoil all their tricks, however. Finding those out will be part of the fun! We’re confident that the Star Trek Online community of captains is up to the challenge of anything the Tzenkethi can throw at them.

We’re excited to share some behind-the-scenes art development of these unique creatures for Star Trek Online.

First, these guys were absolutely one of the most challenging of any of STO species – in the ranks of difficulty comparable to the Bluegills and Undine. Because of the extra arms, tail, and extreme body proportions, there was a lot of back and forth, revisions, and collaboration across many departments throughout the process before it came to the final game versions. 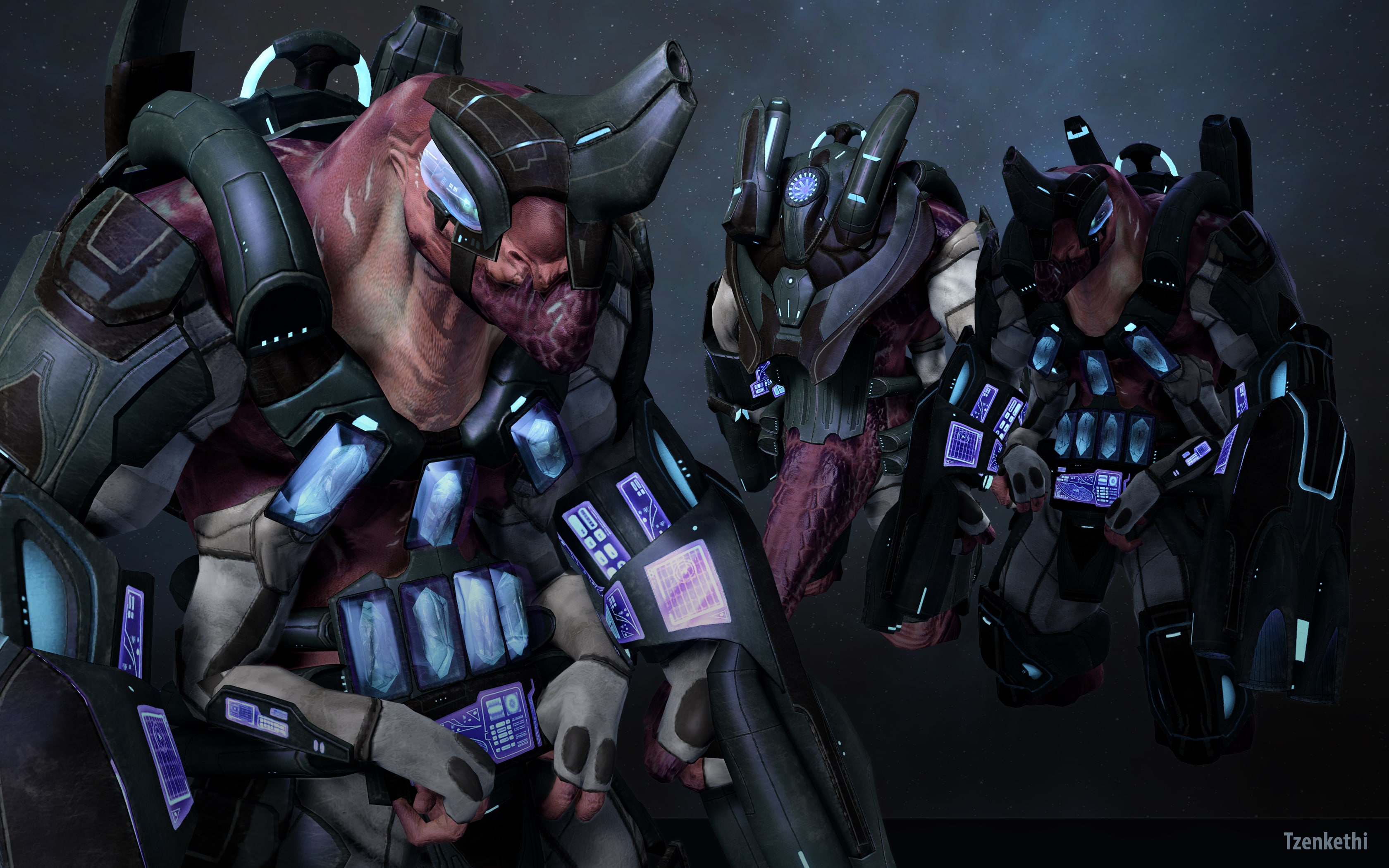 Hector Ortiz did the bulk of the original concept work, designing the body, suit, guns, and backpack. After that, we decided we wanted more distinction in the silhouettes between ranks. Since this species is on its own animation skeleton with very non-humanoid proportions, it can’t easily share any of our normal equipment or clothing, so anything we wanted for them had to be created from scratch. 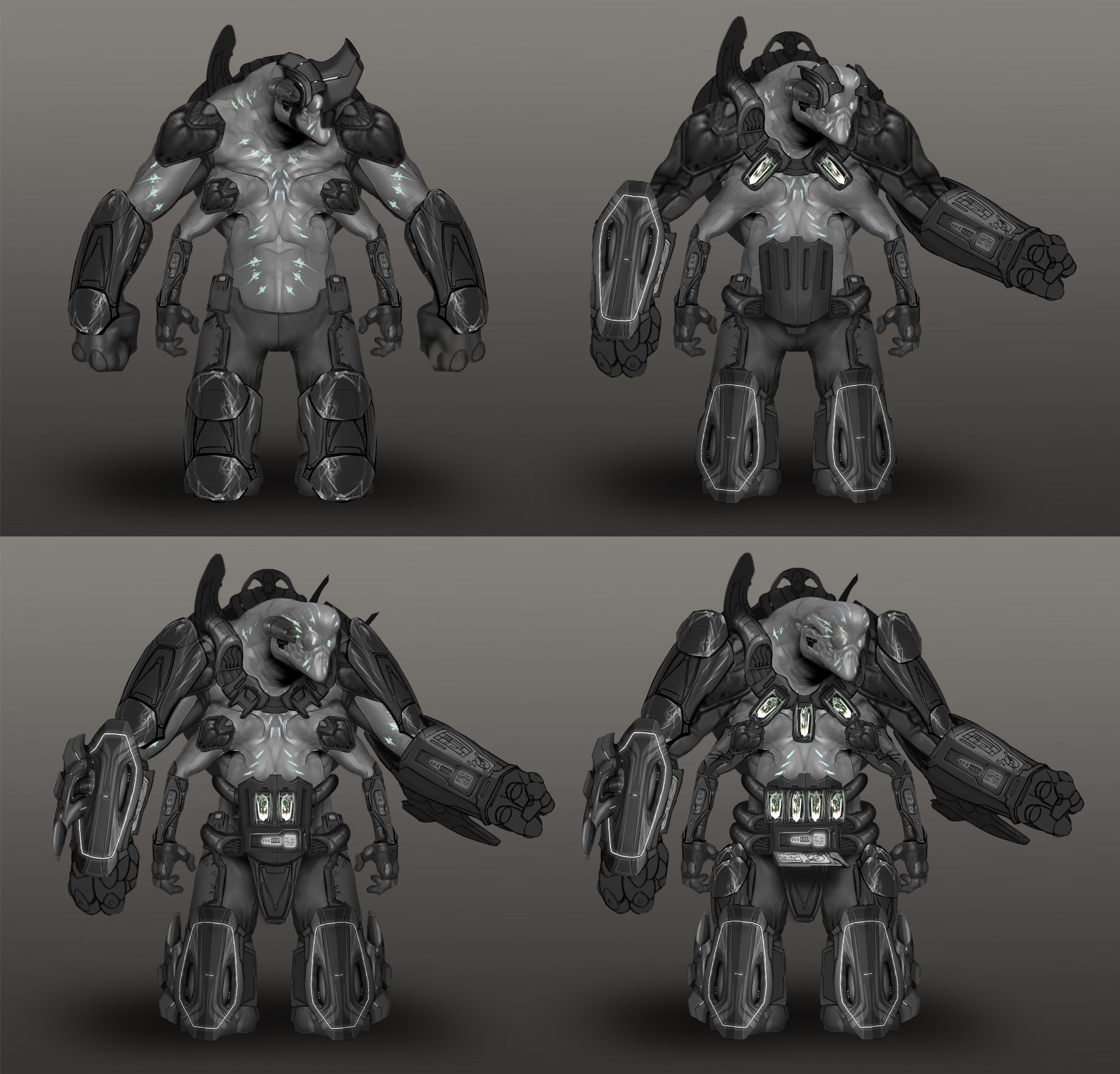 Using Hector’s designs as a basis, we created a set of modular armor for four ranks: Ensign, Lieutenant, Commander, and Captain. One of the biggest goals for the group was to get the idea across that their technology was highly advanced without forgetting that the Tzenkethi are proud of their natural strength and size. Something else we had talked about was the idea of the small arms interacting with alien tech keyboards and displays on the gauntlets and maybe the waist plate while the big arms held the big guns.

Work on the actual body started with very low poly basic shape and proportions in 3DS Max. This was then brought into Zbrush to sculpt out a very high poly, high detail model. 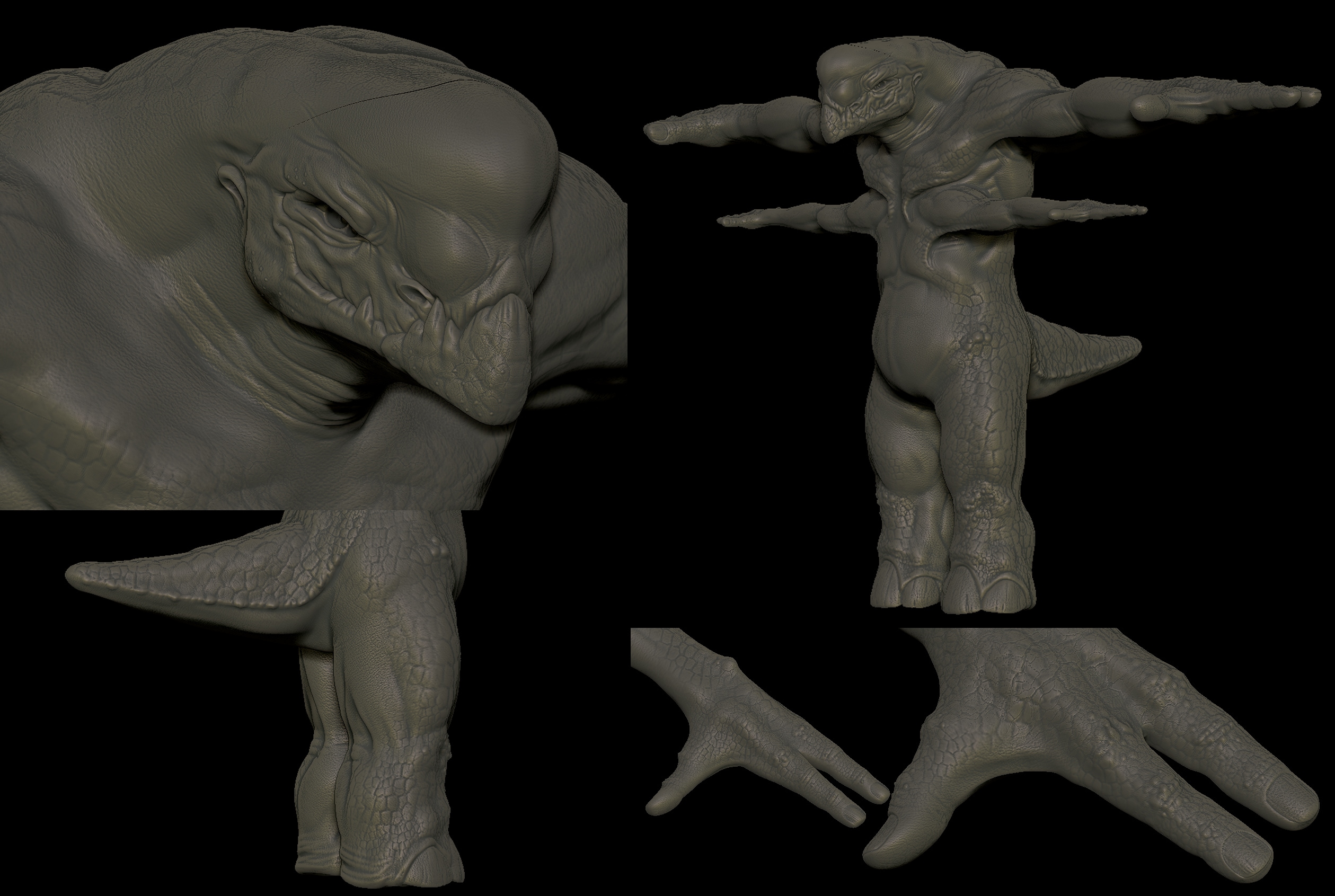 Another low poly model was made from that to make the game version, ensuring that joints animate well, and as much detail is kept from the high poly as possible. Other textures are created including color, and in this case – glow. 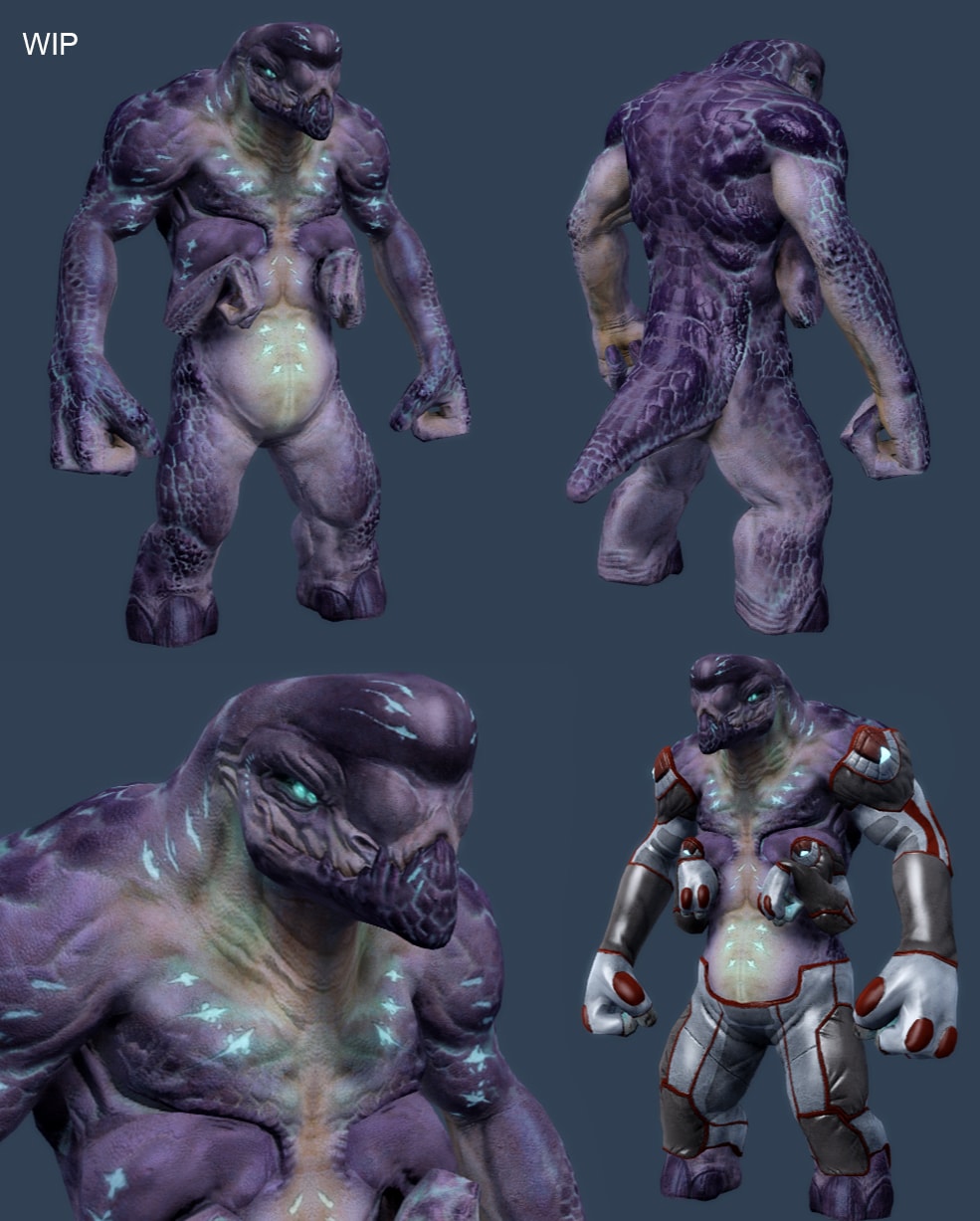 At this stage, there was testing and revisions done both to the model and skeleton. As you can see in the WIP image, some of the proportions don’t feel quite right yet – shoulders stiff and high, head a little too big, etc. The suit is an early version as well.

Next, the armor was built in 3DS Max, and most of the detail for the armor bits was done through Photoshop and a normal map creation tool called Crazy Bump.

Finally after all the parts are in, and the colors are tweaked, we have the complete Tzenkethi critter group. 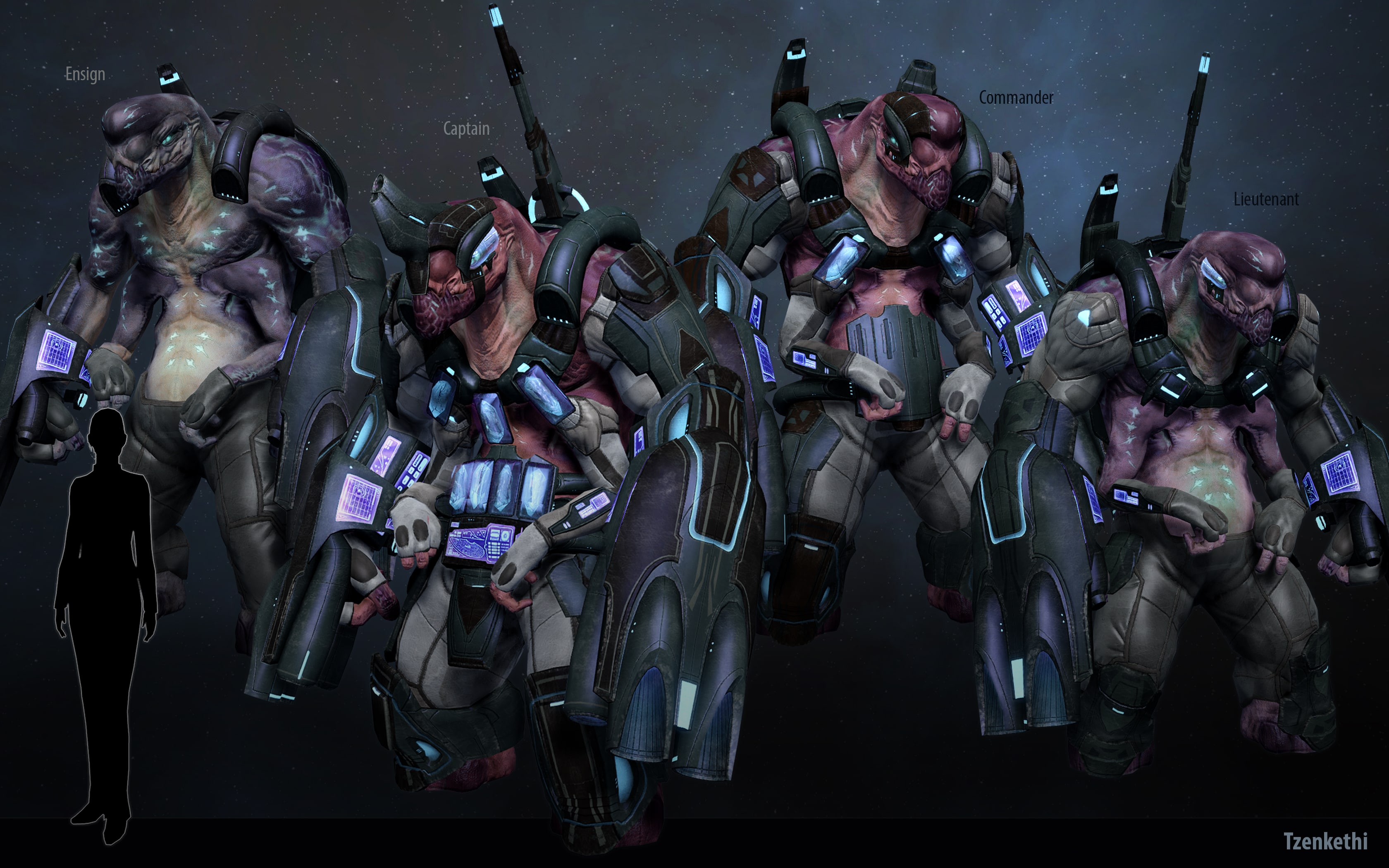