What good is a Winter Event if there are no presents to be had?

In return for participating in the activities Q has arranged for Captains to experience in his Winter Wonderland, he’s handing out presents to all the good boys and girls! Whether they are collectible objects symbolic of the season, biological data on rare snowy fauna or tokens of Q’s benevolence and generosity, players enjoying the festivities will be given the chance to walk away with souvenirs no matter how they decide to participate.

The Holiday Collectibles first seen during last year’s Winter Event will be making a return, and are the same items previously seen. Although, as a slight change from last year’s appearance, players will be able to freely trade them during this year’s event. Unfortunately, only new copies of these items obtained during this year’s event will be unbound, but any bound copies players may still have from last year’s event can still be utilized to obtain the same prizes as this year’s. Be careful stacking old versions and new together, as any stack that contains even a single “bound” version, will become untradeable until separated again. Once you have yourself a tidy sum of collectibles, it’s time to visit the Holiday Vendor to redeem your prizes! Most of last year’s offerings will be available again, although many have undergone improvements, as well as brand new prizes being added to the list. Players will also be able to utilize Holiday Collectibles in a new Featured Starbase Project that will, when completed, allow Fleets to display a special Breen Ship ornament in their Starbase interior. This decoration can be toggled on and off once active, and the featured project will cost only Holiday Collectibles – no other inputs will be required.

Aside from these Holiday Collectibles, participating “The Fast and the Flurrious” (Q’s new competitive winter race) will reward players with special Snow Epohh Tags which can be used in Duty Officer assignments to breed special snowy variants of the critters recently discovered on New Romulus. Once you have obtained a few Epohh Tags, speak with the Winter Epohh Researcher at the gazebo to work on breeding your own Snow Epohh pet.

In addition to earning the Collectibles and Epohh Tags via mission completion, there is also a very small chance that you may uncover a few of each while digging through piles of Snowballs in Q’s Winter Wonderland. So keep a sharp eye out while gathering ammunition for the periodic Snowman invasion!

Both the Holiday Collectibles and Snow Epohh Tags can also be traded in at a special terminal in the gazebo, in exchange for small amounts of Gold-Pressed Latinum. The same terminal will give players access to a Gold-Pressed Latinum vendor, which includes a number of new Personal Holo Emitters that can be used on ground maps to alter the appearance of your captain into forms such as a Reman Guard Captain, a Jem’Hadar First, or even a Borg Drone! These Personal Holo Emitters will also now be available for purchase at Deep Space Nine, near the Dabo table. 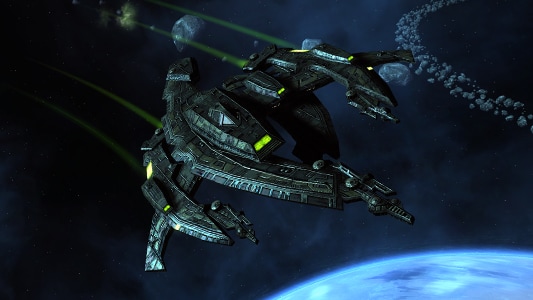 And last, but certainly not least, we must certainly discuss the Grand Prize of the Winter Event. Many hints and speculation have come forth over the past weeks that a new Starship will be made available to players alongside this year’s Winter Event, and I’m happy to officially confirm those rumors, as well as clarifying the methods by which players can get their hands on it.

Several Breen Chel Grett Warships, previously a ship exclusively owned and operated by the Breen Confederacy, have found their way into the hands of the entrepreneurial Ferengi that runs the Holiday Collectible store at Q’s Gazebo. And he is willing to part with these rare and impressive starships! But he asks a small favor in return.

Well… small, for a Ferengi.

You see, this particular Ferengi happens to be an eternally devoted fan to the Illustrious Q, and would do practically anything to get his hands on memorabilia to complete his collection of rare Q-related artifacts. Specifically, he is asking for one thousand (1,000) Autographed 8x10 Glossy Pictures of Q, in return for each Breen Warship.

And how would a Starship Captain like you manage to get your hands on these rare and valuable trinkets?

Each day you will be gifted with forty (40) Autographed 8x10 Glossy Pictures of Q upon completing the “Fastest Game on Ice” (the same race seen during last year’s Winter Event). This means that player captains that can participate in the event 25 times during the 35+ days that the Winter Event will be active, will have earned their way to a FREE Starship!

If, by some stroke of bad luck, you find yourself incapable of participating in the event the required number of times, this does not mean you’ll have missed your chance to earn the Breen Warship! The Lobi Crystal Consortium is selling “Q’s Appreciation Package” for just 5 Lobi Crystal, which will contain 2-6 of his sought-after Autographs. Although this is a large investment in Lobi Crystals for players seeking to purchase the ship outright, remember that the price can be significantly reduced by simply running the “Fastest Game on Ice” on a daily basis.

The full stats and abilities associated with the Breen Chel Grett Warship are listed in this Dev Blog.

All told, we believe this seasonal event will be the greatest Cryptic has ever pulled together. Building from the solid base of last year’s success, we’ve managed to pour our efforts into improving both the activities and their associated rewards, in ways we believe players will enjoy participating in this year, and look forward to for years to come.

NOTE: The minimum level for players to participate in Q's Winter Wonderland is 5+ (Fed) and 24+ (KDF).