Of Hawks and Doves 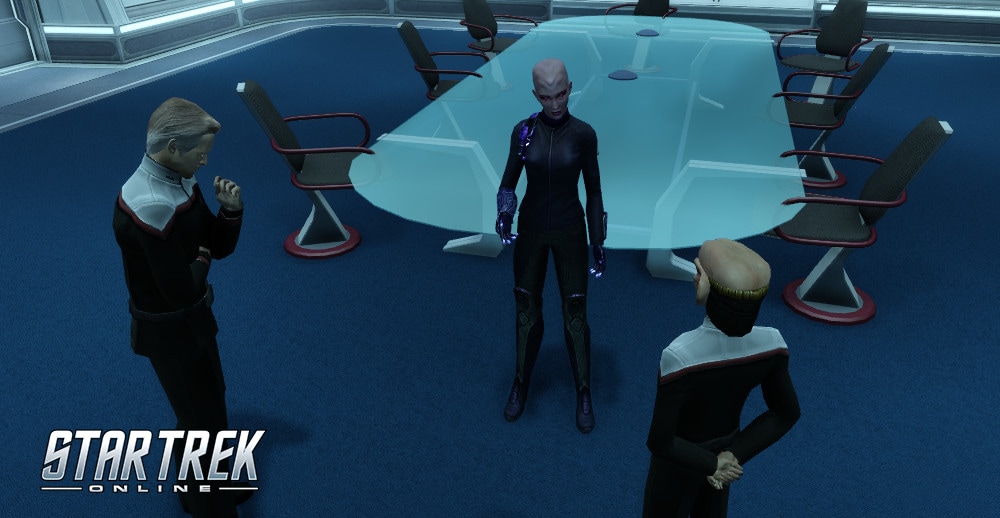 Administrator Kuumaarke hurried to the conference room, a data pad tucked under one arm. She hoped that nothing had happened over the course of firstmeal. The Alliance advisors were looked on with curiosity as well as suspicion by the other Lukari on the planet. She hoped nothing was amiss. The two were her responsibility according to the Planetary Council. She was, after all, the ranking Lukari who had experience dealing with aliens.

"I'm sorry! I had a morning meeting. I hope you were well treated, " she apologized as she entered the room, the door shutting behind her with a soft whoosh.

The two aliens looked up; the tall one frowning in a facial gesture that she'd been astounded to learn meant nearly the same thing to his race - human - as it did to hers.

"Nothing is wrong," the human, a male named Tom Paris, said. He held the rank of captain, and was an adept ship designer and explorer she'd been told. "I'm sorry if we gave you that impression," he apologized.

The other alien, a Ferengi, , nodded in agreement. He was far more agreeable than the greedy and belligerent DaiMon Madran, the first Ferengi who made contact with the Lukari. "We just wanted to go over some things with you." Captain Nog glanced up at the much taller human then back at Kuumaarke. "We've come across some... inconsistencies in the Planetary Council's requests."

"Oh! Well then. I am glad to hear it. Wait… inconsistencies? What sort of inconsistencies? Perhaps the universal translator needs my assistance?" She took a seat across the conference table from the two Alliance advisors.

"Well, I don't know if this is really an issue of translation," Paris said, bringing up several reports on a nearby viewscreen. He'd highlighted some of the requests in bold red. "See over here, I have a request for how to advise your engineers on making your hull more durable and over there is a request to double the proposed weapon emplacements."

"But we have another report," Captain Nog said, "It wants us to reduce the number of weapons down to two so the space can be filled with extra sensors. And in this report, they want to use an experimental Warp Engine configuration that has a longer range."

"Which is fine, until you get to this report, where the engineers want to use a bigger engine that can pump more power into shields and phasers," Captain Paris said. He folded his hands on the table. "Now, Nog and I are happy to play advisor while you build this new ship, but we're getting two stories about what the Lukari want this ship to be. Do you have any insight?"

Kuumaarke looked at the images of the reports and sighed. This debate again. "This is actually an ongoing debate. I think everyone involved has an opinion, some of which are… contradictory. I'm disappointed the council didn't come to a consensus before they started to give you conflicting requests."

"There are a number of people here who think that, after everything that's happened, we should have a tough warship," Kuumaarke explained. "And given the recent conflicts, I can see why. We're not exactly in a strong position to protect ourselves."

"I can't see the Federation abandoning you if you faced any sort of military aggression," Nog said.

"For that matter, I think the Klingons and the Romulans would step in too - for their own reasons as well as ours," Paris agreed.

"That may be true, Captain, but we'd be relying on outside support in such a situation," Kuumaarke said, apology in her tone. "That doesn't sit well with many Lukari. We have been utterly self-sufficient since we can remember. Even accepting as much help as we have has displeased some parts of the population."

"I think I can respect that," Tom said.

"And I understand that too,” Nog added. “Ferenginar has undergone a lot of changes in my own lifetime. Even now, not everyone is happy to see females in clothes and owning businesses."

Nog waved a hand. "Cultural thing. I can explain later. But back to the question at hand."

Kuumaarke shook her head and made a note to herself to look up more about Ferengi. Maybe this recent cultural shift would help explain how Captain Nog and DaiMon Madran could belong to the same species. "Right. We’ve talked about the desire to protect ourselves. There’s also a strong desire to grow, to expand our understanding of the universe around us.” She called up a number of documents relating to scientific pursuits. “Since we've been so self-sufficient, we haven't had a driving need to explore beyond our planet until now." She gestured to one of the relevant documents. "The science community wants to know more about what's out there, and they want to see it for themselves. We've been looking inward for so long, it's very exciting to have looked around and seen there is so much more out there."

She shook her head. "I barely have the rank enough to be working with you two as a liaison. I couldn't possibly tell you how to answer the Planetary Council."

"I don't know," Paris said, "You’ve done a good job, despite your entire world being turned upside down."

"Thank you." She sighed. "Did either of your species have to deal with this?"

"On Ferenginar, we mostly sold protection contracts to mercenaries. In the early days, anyone who wanted to explore space did so to find opportunities for profit. They were self-funded entrepreneurs more than explorers," Nog answered. He looked over at the human officer.

"Earth has dealt with this a number of times over the years," Paris said, nodding. "Our very first long-range ship, the Enterprise, caused this very debate."

"Enterprise? Isn't that the name of your flagship?"

"It is, but the Federation has a long tradition of reusing the names of notable ships. In that way, the current bearer of the name joins the tradition of every ship that used the name before. The tradition of the Enterprise extends back to when humans were still discovering Earth and sailing on the sea."

"Oh! That's a wonderful tradition!" Kuumaarke exclaimed. "Maybe this new ship of ours will start something similar."

"Maybe," Paris chuckled, "but the Enterprise NX-01 had some folks who wanted to see her built aggressively, with a lot of weapons for defending the planet. At the same time, some people wanted to see her peacefully exploring space and meeting the neighbors as friends, not aggressors."

"Well, it worked out well for the explorers… didn't it?"

"Eventually it did," Paris explained. "But during the first few years the NX-01 was operational, Earth was attacked. Millions died. As a result… the debate began again. There were a lot more in favor of weapons and defense that time."

"But Starfleet's mandate is exploration, is it not? Surely that is the correct answer then."

"Not necessarily," Nog said, his expression translated to Kuumaarke as one of grimness. "Starfleet has swung between being more defensively or even offensively minded. We just got out of a shooting war for our lives with a race called the Iconians. They're the reason there's an Alliance at all, but all of us are now in possession of very powerful war machines. While I personally find it to be a relief to be going back to doing science and exploration-"

"And meeting the neighbors!" Tom chimed in.

"And meeting the neighbors," Nog agreed with an amused expression, "military machines do have their place and the reasons for having them are valid, too."

"Look at the Klingons, for example," Tom said. "Their ships are very militarily minded and that's what is right for their people. Even in the Federation, Andorian ships are a bit more aggressive while Vulcan ships are veritable bastions of peaceful, scientific study. We have both hospital ships as well as carriers for fighters."

"What should we do?" Kuumaarke asked. "We're only building the one ship right now."

"We can't tell you that," Nog says. "We're not Lukari, so we don't know what might be best for your people."

Captain Paris smiled. "Part of finding your way out there is to decide these things first. Humanity had to do it with Enterprise. You need to do it here."

Kuumaarke looked at the documents pensively before turning her gaze back to the captains. "I'll speak with the Planetary Council. We'll come to a decision. Perhaps we'll go down a middle path. The universe is a dangerous place, but that doesn't mean we shouldn't explore it – ready for whatever may come our way."

The two nodded. "We'll go along with that until we're told otherwise," Nog said. "Thank you."

Kuumaarke bid them farewell as they got back to work. She had some letters to write.