The Romulan Star Empire has long been one of the dominant powers in the Alpha Quadrant. Boasting unparalleled Cloaking technology, powerful Plasma and Disruptor weaponry, and the resourcefulness to quickly develop countermeasures for the tactics of other factions, Romulans were a key force in many conflicts since the 2150s.

Warbirds – the most iconic of Romulan vessels – have formed the backbone of the Romulan military for centuries. With the destruction of Romulus, these Warbirds have become a lasting symbol of the once mighty empire’s strength – as well as a new home for some of the many refugees in the wake of their planet’s destruction.

With an emphasis on the tactical use of potent abilities stemming from advanced Romulan technology, Romulan Warbirds are built to fight like the Romulans themselves – with a high risk, high reward style. Romulans are masters of Cloaking technology, and all Warbirds are equipped with a Cloaking device. In addition, the Romulan racial trait – Subterfuge – enhances the performance of Cloaking devices and increases the damage that their ships deal after lowering their Cloak.

Romulan ships tend to be large and heavy, making them somewhat slower and less maneuverable than comparable Federation and Klingon Defense Force ships. The iconic D’deridex, for example, is larger and more resilient than the Galaxy – but considerably slower as a result.

Unlike Federation and Klingon Defense Force vessels, Romulan Warbirds are powered by a unique Singularity Warp Core. The Singularity Warp Core can build power as the Romulan ship engages in combat, and then utilize this power to produce one of several devastating effects on the battlefield.

As an added consequence of their unique Warp Core, Warbirds create a deadly Singularity implosion when they are destroyed.

The ships below will be available to players for free upon leveling up. Other Romulan ships, such as Refits and Retrofits of these vessels, as well as completely unique ships, will be available for purchase through the C-Store. 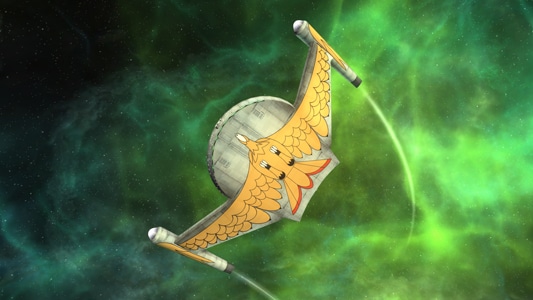 The T'liss Light Warbird was the most heavily utilized model during the 23rd Century. The T’liss is the fastest, lightest, and most maneuverable Warbird available. Like all Romulan ships, the T’liss is equipped with a Cloaking device, but vulnerable while cloaked.

As a quick and mobile vessel, the T’liss may appeal to players who currently enjoy flying Raiders.

Note: This is the starting ship for Romulan players. 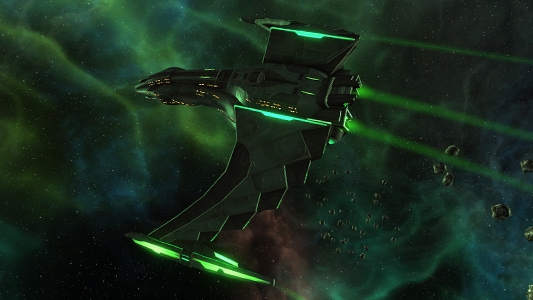 The Dhelan Warbird was designed in the early 24th Century and utilized heavily by the Romulan Star Empire. It served as the model for many later ship models, such as the Mogai-class, and retains significant advantages over many modern ships. The ship is larger than the T'liss Light Warbird and much sturdier, as well as carrying a heavier payload of weapons. It sacrifices little mobility for these improvements, having an only slightly slower turn rate and impulse speed than the much smaller T'liss.

Fast, but with moderate defensive capabilities, the Dhelan might be a good choice of ship for a player who currently likes the style of Escorts. 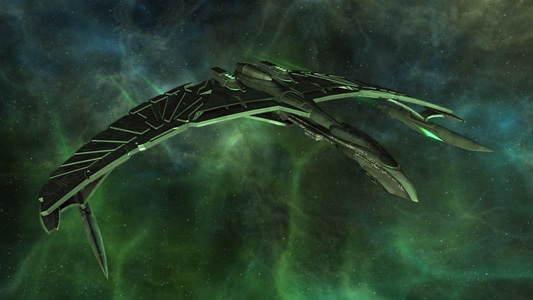 The Mogai Heavy Warbird was a powerful ship utilized by the Romulan Star Empire toward the end of the 24th century. The Mogai has an average turn rate and impulse speed, but carries more weapons than the Dhelan and has significantly increased hull strength.

With a solid mix of maneuverability, firepower, and defense, players might find the play style of the Mogai similar to a Destroyer. The D'deridex Warbird Battle Cruiser was the foundation of the Romulan Star Empire's forces in the 24th century. Drastically heavier than the earlier T'liss and Dhelan models, the D'deridex was significantly more resilient and carried firepower comparable to a Federation Galaxy-class ship.

Extremely focused on defense, but capable of carrying heavy weaponry, the D’deridex will likely appeal to players who enjoy the current style of play of Battle Cruisers. 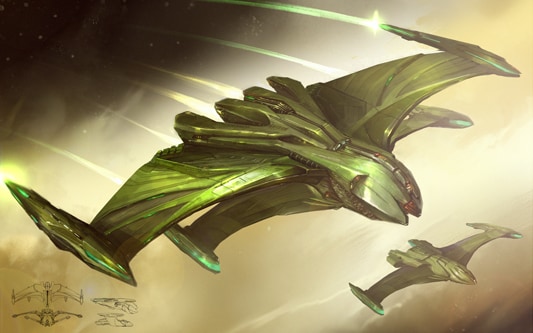 The Ha'apax Advanced Warbird represents the latest developments in Romulan technology. Larger than even the mighty D'deridex, it has superior firepower and even greater hull strength. While slow to maneuver, the Ha'apax is a juggernaut on the battlefield, capable of withstanding tremendous damage while unleashing its weapons on its foes.

We have many more Dev Blogs planned for you before leading up to the launch of Legacy of Romulus, including more detailed information on the Singularity Core and our Romulan vessels that will be offered in the C-Store. We cannot wait for you to be able to fly your own Romulan Warbird this May. See you in-game!