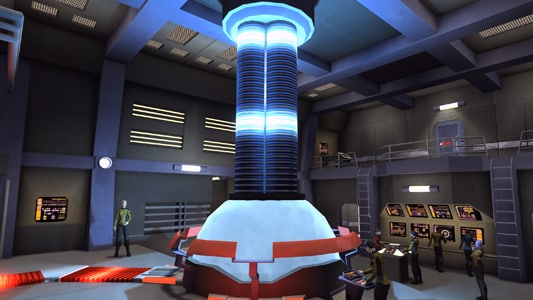 Since Star Trek Online launched, warp cores have been one of the most consistently and frequently requested new item types. In Legacy of Romulus, we’re adding warp cores to every ship in the game, and the new mechanics that come with them mean every captain will have new tools at their disposal in their quests of exploration or conquest.

All of the ideas of what a warp core should be have had a common theme from the start of the design process – warp cores should affect your power levels, and they should help define what’s unique about a given ship configuration. Throughout Star Trek canon, warp cores have been used to power numerous feats of engineering and scientific ingenuity – and now, we want to give players the same feeling of drawing power from their warp core to squeeze out a win from what would otherwise be an impossible situation. Now Is the Time

When we started planning Legacy of Romulus, the unique aspect of Romulan ship-building that stood out to us was their singularity-powered ships. As we developed the singularity mechanic for Warbird-class ships, we realized that Legacy of Romulus was the perfect time to bring warp cores to Star Trek Online. We therefore created two different types of warp core items – Matter/Antimatter warp cores, used by Starfleet and Klingon ships, and Singularity warp cores, used by Romulan ships.

Warp cores are fundamentally about allowing players to further customize their ship’s power and skill levels. Warp cores slightly alter how the base power levels of your ship work. Matter/Antimatter warp cores augment one subsystem by boosting its max power to 130, while also providing you an efficiency bonus if that system is running under 75 power. Singularity warp cores give you bonus power in one system as your Singularity charges, letting you customize which system is strongest by choosing a warp core that augments the system you desire.

Introducing warp cores to the game naturally caused us to take a look at how your ship’s warp speed was calculated, and we decided to make some quality of life changes for players. Previously, the difference in speed between a fresh level 1 Miranda and a Vice-Admiral retrofit ship was fairly marginal, leaving players feeling like there was no real progression in sector space speed. We decided to re-scale Warp Speed, bringing down the visual display of speed to honor the canonical speed limit of Warp 10, while increasing the speed at which players are actually moving. This means captains moving at Warp 10 will now reach their destinations more quickly than they could before. Warp cores in general are designed to provide customization and progression to ships with stats and powers that aren’t found on any other items in the game. Matter/Antimatter cores focus on Engineering stats, boosting abilities like your electro-plasma systems, your starship engine performance, or your starship batteries. They also enable you to play with power levels in new and interesting ways. Rare cores create a synergy bonus from one power level to another, allowing you to gain some bonus weapon power from putting all your power into auxiliary power, for instance. Very rare cores go a step further, providing you with a “capacitor” power – a reusable battery that can either be used to add power to your subsystem or to bring it back online if someone has knocked it out.

Conversely, singularity cores focus on science-based stats and modifying a Warbird-class ship’s singularity powers, giving Romulan players extra tricks with which to dispose of their enemies. Some cores boost abilities such as particle generators or graviton generators, while others instead affect the rate at which you gain singularity power or reduce the wait time between using two singularity powers. With these cores, we’re aiming to allow players to tweak their own singularity mechanics to their liking, and to play with each new singularity power to discover optimal uses for each one. Rare singularity cores let you enhance your favorite Singularity power, adding effects like high-yield torpedo redirection to your Warp Shadow or a crit severity buff during your Singularity Overcharge. Very rare cores provide an analogue to the “capacitor” powers found on Matter/Antimatter cores: they allow you to drain your current Singularity power level and shunt a portion of it into a particular subsystem.

Additionally, at level 50, we want to allow players to use Slipstream and Transwarp more often via special warp cores. These are fun powers that make you feel like you can break the laws of physics – getting them to be faster and better as you get high level warp cores makes sense and feels good. Higher mark cores have more profound effects on your Slipstream or Transwarp, so acquiring Mk XI and XII cores will make you even faster at getting around the galaxy. 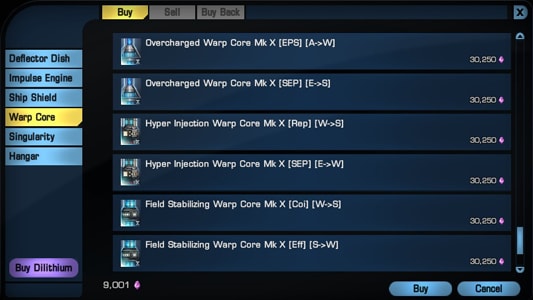 The addition of warp core mechanics to all ships will slightly change the feel of space combat gameplay for those who are looking for new additions, but can also be largely ignored at little cost if you like flying your ship exactly as it is today. The subtle differences between Singularity and Matter/Antimatter cores also help to drive home the distinctness of the Romulan faction’s culture and style, emphasizing science-based skills and subterfuge over the direct engineering approach favored by Starfleet and the Klingon Defense Force. There are thousands of different warp core power combinations, allowing for an extreme degree of ship customization based on playstyle and preferences.

Initially, warp cores will occasionally be salvaged from destroyed enemy ships. They can also be purchased for Energy Credits at vendors in your faction's hub, or for Dilithium via the Dilithium Store. When warp cores are added to Star Trek Online, every ship you own will be automatically fitted with a Standard-Issue Warp Core of a mark appropriate to your captain's level. In the future, in the months after Legacy of Romulus launches, warp cores will be obtainable by other methods as well, with some special Romulan duty officer assignments to build singularity cores, as well as a suite of cores being added to a Fleet store. Obtaining a desirable warp core should be no more difficult than obtaining a desirable deflector array or impulse engine.

Ultimately, warp cores provide players with a deep new layer of customization for their ships, and empower captains to build their ships with more components found in Star Trek canon. The warp core slot also allows us to build unique cores as pieces of a future item set, or to house a unique ship mechanic in a non-console item slot.

We hope you enjoy the new mechanics of warp cores, and look forward to seeing you all zipping around the galaxy when Legacy of Romulus goes live!

Voyage to Saturn and Beyond
Next week, the Saturn Class comes to the Infinity Lock Box on all platforms, and the UEDF Vessel joins it on Console!
Read more
Q's Winter Wonderland!
Come one, come all, join the festivities at Q's Winter Wonderland!
Read more
Black Friday: The Final Frontier
In one of our biggest Black Friday sales ever, you can save on Zen, in the Zen Store, in Mudd's Market, get two limited time bundles, and more!
Read more