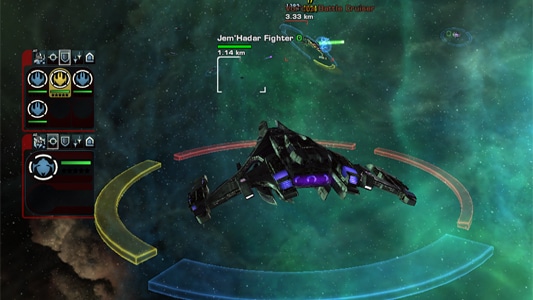 Captains who choose to command carriers in Star Trek Online have a unique gameplay mode available to them that is not experienced while flying other ships. Launching waves of hangar bay crafts is exciting, and we are about to take this one step further by enhancing the sense of control and investment that a carrier captain feels while commanding their fighter squadrons.

Some of the most frequently received feedback from players who fly carriers is that they would like more control over the hangar bay crafts, as well as having more information about the status of their launched hangar craft available to them at a moment’s notice. The introduction of our updated carrier command interface will do just that.

When this update goes live, all ships that possess at least one hangar bay will see a new UI element on their screen, as long as they have an item equipped in their hangar bay slot (e.g. fighters, drones). It will display all hangar crafts currently active from that bay, as well as the following statistics: number of active crafts, hitpoints, shields and rank – a new feature we will explain in more detail further on in this blog. Included along the frame of this UI is a row of buttons that represent launching your crafts, and sending them commands.

For the first time, this new UI allows for carrier captains to send hangar-specific Carrier Commands to each hangar, allowing separate commands to be sent simultaneously to two sets of hangar craft (if your ship has more than one hangar bay). For those players wanting to provide the same command for both hangar wings, utilizing the buttons on your Weapon Tray will continue to function as it currently does, sending the same command to both sets of hangar crafts. For starships with only a single hangar, there is no functional difference between the new Carrier Command buttons and the existing ones.

Due to the aforementioned updates, Duty Officers that required a specific Carrier Command to be active in order to function have been updated. They will now activate if either hangar bay is issuing the necessary command. With this change, it is important to note that his may allow Carriers to benefit from two different Duty Officer active roster abilities simultaneously. However, the max number of Flight Deck Officers which may be equipped has not been altered (still 3 max).

One of the most exciting additions bundled with the updated command interface is the ability for your hangar bay crafts to gain Ranks while they are launched. There are a total of five ranks, and each rank-up will improve their performance over time. Each fighter you launch will gain Ranks separately over time, so if one is lost it has no impact on the current Rank or continuing progress of any that remain intact.

Ranks are slowly gained based upon the time they spend in combat without dying. Reaching Rank 5 requires a total of 5 minutes of active Combat time, with early ranks being more quickly achieved than those at the high end.

Each time a hangar craft achieves the next Rank, it instantly receives a 25% Hull HP heal, as well as gaining additional stat buffs:

NOTE: Ranks will be reset when a craft or your carrier is destroyed, or any time that you change maps. 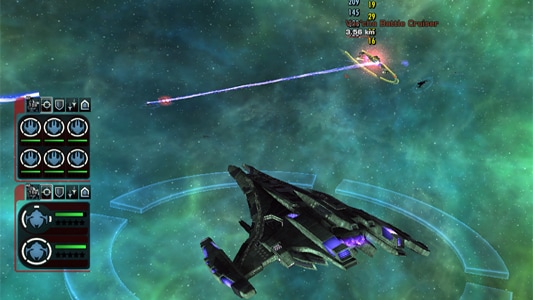 In order to balance hangar crafts’ new ability to Rank Up, all combat crafts have received a slight reduction in outgoing damage. This equates to roughly around a 4.0% reduction, and is completely offset by reaching Rank 2. In addition, all launch timers have been standardized. For example, some ships used to wait 1 second between each craft summon, and others would wait up to 4 seconds. These have all been standardized to a 2 second interval between each craft summon.

In order to reinforce a sense of investment in your active hangar crafts, this update will alter the way in which new hangar craft are launched. Currently, calling out a new wing will replace all ships in that wing, even if they are still alive and diligently performing their combat duties in the field. When this update goes live, activating your hangar bay while crafts are already summoned will no longer replace active crafts, but will only fill in ones that are missing. Since the Hangar UI allows you to easily see your crafts’ status, spamming your hangar bays should no longer be necessary. To further add to this sense of investment, we’ve granted all summoned ships the added alertness necessary to have them avoid Warp Core explosions with a near-perfect frequency.

Note: Although non-hangar crafts will not benefit from the rest of the updates described in this blog, this Warp Core avoidance will also be added to crafts like Saucer Separation, Multi-Vector Assault Mode, Ha’apax Separation, and other similar crafts.

All Carrier Commands have had their descriptions updated to reflect their functionality – a long overdue addition that should help newly commissioned Captains to learn the ins and outs of commanding their hangar craft. Each tooltip will now briefly describe the expected AI behavior that will result from issuing each command.

We are excited to announce that this new system will be available on Holodeck in an upcoming patch, and is currently available for testing on the Tribble Test Server. If you fly a carrier, or are looking to fly one, copy over a character and leave your feedback in this official feedback thread.

We hope our players that command carriers enjoy this new interface and all of the new possibilities that are available with it, and look forward to hearing any feedback you may have about these updates. We’ll see you in-game!