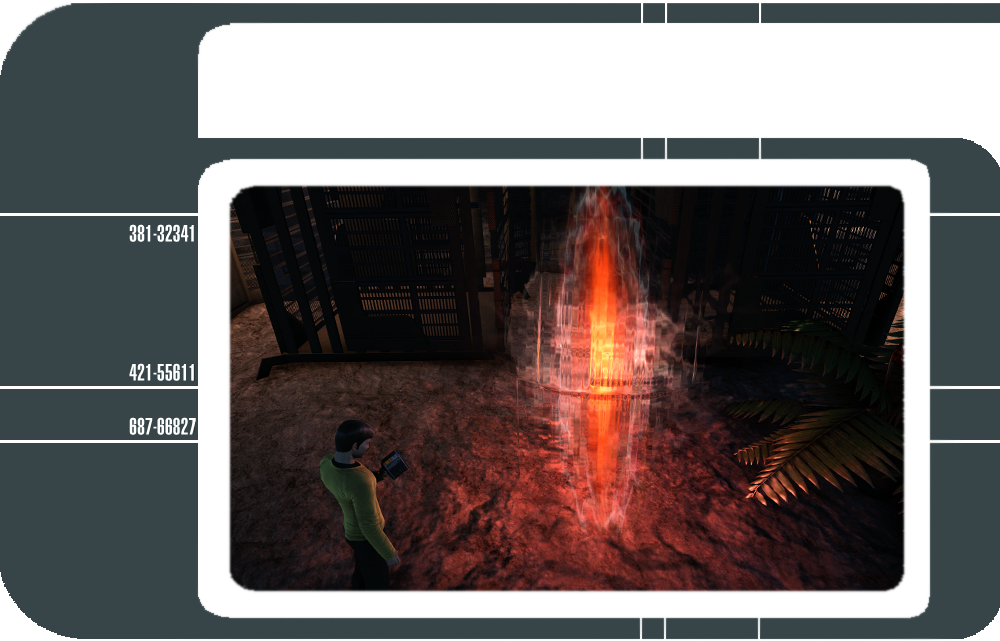 The fight for the future – and the past – is heating up! Prepare to boldly go when no-one has gone before!

Federation agents from the 31st century are conducting covert operations to find new recruits. They’ve gone back to the 23rd century, in the early days of Starfleet, to find likely candidates.

When the new Agents of Yesterday expansion launches on July 6th, you’ll be able to make new captains from the Original Series time period – but they won’t stay in the 23rd century forever! For a limited time, these captains can become special temporal agents, recruited to track down and disable probes seeded throughout the timeline by the Na’kuhl and their allies.

Temporal Agents will play through all of the usual story missions, but in many of them they’ll uncover probes left by the Na’kuhl to gather intel or drop off equipment for enemy operatives. By completing puzzles, Temporal Agent captains can unlock those probes and disable them – and get great rewards in the process. In some cases, the interference of the Na’kuhl may result in new enemies or revelation of new secrets in these missions!

In addition to hunting down temporal probes, Temporal Agents will be able to use their special Temporal Transponder item to claim rewards for completing other tasks, such as finishing story arcs, gaining Reputations, completing Duty Officer commendations, finishing Admiralty campaigns, and learning Specialization skills. Unlocking these rewards will also earn rewards for other characters on your account, in addition to providing your Temporal Agent with new traits, gear, and bonus marks.

For the first six weeks of the Temporal Agent release, there will also be shard-wide tasks to which Temporal Agents can contribute in order to unlock rewards for the entire server. During this time, Temporal Agents will also add small amounts of Dilithium Ore as a bonus reward for enemies defeated, given out to their entire team.

The rewards for playing a new temporal recruit are many – and the tasks are those that many captains will complete as they play through the story arcs. Long-term dedication is also rewarded with new bonuses.

Find Temporal Probes: Finding and disabling Na’kuhl temporal probes in various missions will award your Temporal Agent with a small box of Marks of your choice. Finding half of the temporal probes will additionally award you with the new Trait: Rapid Support, which reduces the cooldown time of your Engineering, Science, and Tactical Fleet Captain ability. Finding all of the probes will unlock an Improved version of the Rapid Support Trait.

Reach Rank of Admiral: At each new rank you’ll gain a package of gear to enhance your space weapons, space equipment, space consoles, or ground equipment – your choice.

Play through Story Arcs: You’ll gain packages of Fleet Marks, Dilithium, and Energy Credits for playing through each Story Arc, including everything through the Breen arc, as well as the Delta Quadrant arc, the Future Proof arc, and the new Yesterday’s War arc. Finishing half of the Story Arcs unlocks the new Trait: Critical Systems, which grants a bonus to critical hit and critical severity for a short time after using any Emergency Power ability. Completing all of the Story Arcs grants an Improved version of this Trait for all characters on your account!

Admiralty: As you complete tiers of various Admiralty campaigns you’ll gain bonus one-time ship cards and pass tokens. Reaching level 3 in three Admiralty campaigns will give you a bonus that permanently gives you extra experience earned from completion of Admiralty assignments for all captains on your account!

Fleet: Join a fleet after level 30 and get a package of Fleet Marks and Fleet Dilithium Vouchers.