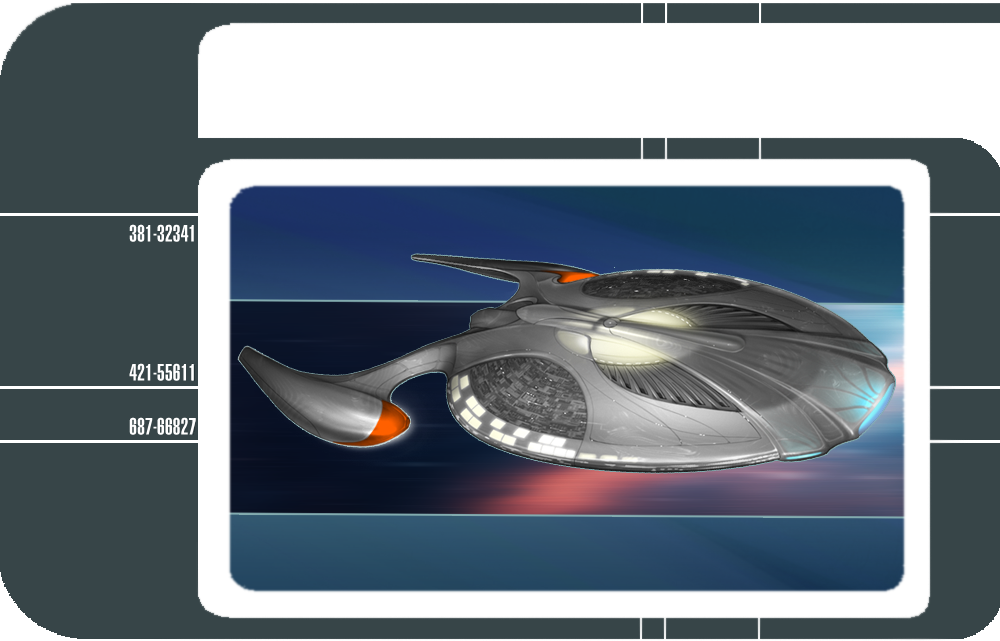 When creating the 26th century Federation ships, it was decided to do a clearly Cryptic design but respect the legacy of Doug Drexler’s Enterprise-J. The Enterprise-J is a really controversial design that challenges our imagination and pushes the limits of what we think a spaceship in the 26th century should be. We decided to go the same route when doing our ships.

These ships are like flying sculptures from a society that clearly has the means to put function above form without obstructing the former. The ships themselves are made from a flexible material that somewhat resembles porcelain and feels like water to the touch. If you look closely, it even ripples a bit if you knock it. The center top of the ship has a depression where some kind of left-over energy is always present. Energy hungry, but harmless space creatures can be seen feeding there from time to time, just like moths in a lamp.

They’re an absolute spectacle and people always go to the energy rim area to watch them fly around. These ships have neither visible bridge structure nor familiar windows. Walls around you can project holograms or get transparent if you feel the need to see what’s outside. Transparent roofs and floors are highly desirable in this century. This is a culture that really embraces space and wants to feel like part of it.

Overall, the modeling for some of the 26th century ships was straightforward. Concept provided assisted in the process of constructing these ships in 3D. Due to the lack of individual interchangeable parts, these ships were built as one large piece, instead of many smaller ones. That simplified the technical side of construction and implementation. Some of the nacelles between ships built are based upon one another, not unlike their 23rd century counterparts.

The Theseus Class is the 26th century counterpart to the 23rd century Perseus Class. Both ships feature a downward swept pair of pylons and nacelles. The Theseus is especially flat due to the Enterprise-J's appearance also being mostly flat.

The Nautilus class is an unusual ship, just like its 23rd century counterpart, the Daedalus class. This ship, while being the shortest and narrowest of the 26th century ships in this line up, is actually the tallest, thanks to its notably tall wheel-like front section. This ship was once called the Perdix, inspired by Greek mythology and its counterpart, the Daedalus. However, upon further scrutiny and iterations on the design, its name was changed to Nautilus.

The Sagittarius class is the largest of the group, yet still small in the grand scheme of things. It also shares the most similarities to the Enterprise-J out of the entire lineup.

The Paladin class is based upon the 23rd century ship, the Ranger class. While the Ranger class is visually related to the Enterprise NX-01 from the 22nd century, the Paladin still draws many basic design elements from the NX-01, despite being a distant cousin.