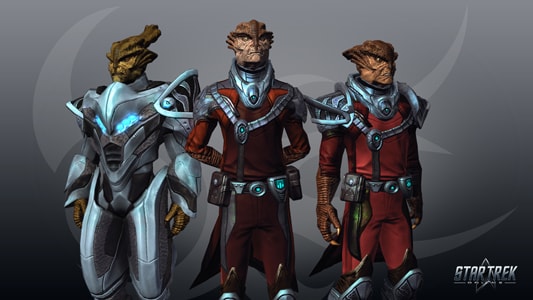 The Voth are an interesting group. They’re highly evolved, technologically advanced dinosaurs that left Earth millions of years ago to avoid impending doom (according to the “Distant Origin Theory” that some of the Voth believe in). We’ve been toying with the idea of using them as a villain group in Star Trek Online for quite a while now. We started doing initial Voth creature sketches back in 2010, but they were shelved when we decided to go in a different direction. The Sphere has finally given us the perfect venue to bring this group to life.

We knew immediately that in order to make this group a really interesting player experience it was going to need a lot of variety. We talked with the game design team and started to get a feel for what they wanted to see in the species. We kicked around a lot of ideas and had some debates about how to represent them. The Voth in "Distant Origin" (Star Trek: Voyager, Ep 3x23) are portrayed as highly evolved scientists, and we wondered whether or not they would even have a military. In the end, we decided that it would be in the game’s best interest to design the Voth in the Sphere as a technologically advanced group of soldiers. We talked about everything from mechs and dinosaurs to flying creatures and super soldiers. At one point our Lead Designer, CaptainGeko, said, “all I want is dinosaurs with frickin’ laser beams on their heads!” We all chuckled, and then he said, “I’m being serious; this is a game. Let’s have some fun!” So we did, and what we ended up with was almost too much diversity! 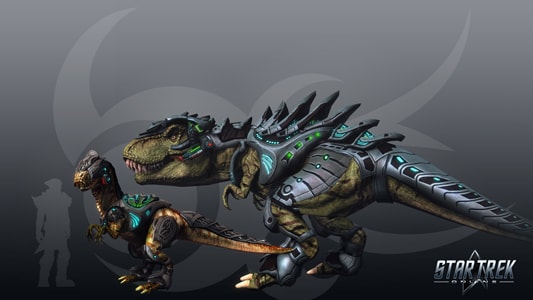 This is probably the most complex group we’ve done on the art side. There’s the base Voth humanoid, and then we have a Voth in power armor, a class of mechs with jumpjets and a whole group of dinosaurs with frickin’ laser beams on their heads! For the Voth humanoid, we stuck pretty close to what we’d seen in the show, a dino humanoid that looks like it might have evolved from a Hadrosaur, with the largest similarity being the cranial crest. When it came to the mechs and armor however, we got to play with the designs. In general, because they are so advanced technologically, we went with a sleek futuristic look on all of their tech bits with smooth flowing lines and not a lot of right angles.

Because they’re antagonists and we wanted to make sure they looked like something that needed to be fought, we made sure to add a few toothy looking knife points into the costume designs. Mimicking the ship designs, we went with mostly blues and greens for the parts that glow, such as lights and tech panels. Then to keep them from feeling too generic sci-fi, we added some interesting ornamentation to their designs by incorporating a kind of wavy tiger stripe pattern that we gleaned from some of the outfits in the Voyager episode. Adding this one small design element really helped to bring a level of cohesion and uniqueness to their design and lets us know that these creatures take pride in their appearance and care about more than just function. We’re still putting the finishing touches on the Voth, but what we have so far really is a visually interesting enemy group. Add to that all of the new and exciting gameplay scenarios and environments that players are going to encounter, and The Sphere is really shaping up to be an amazing update to this ever-expanding game.

We hope you enjoy it!

The 12th Anniversary Event!
It's almost time for our 12th Anniversary Celebration! Get details on the events you'll be participating in to earn a new T6 Ship!
Read more
Iuppiter Iratus
The brand new TFO, Iuppiter Iratus, is coming to PC very soon! Defend Jupiter Station from an invasion of Terran Forces!
Read more
35% Bundle Sale!
Captains on PC can save 35% on Ship Bundles and Expansion Pack Bundles this week!
Read more