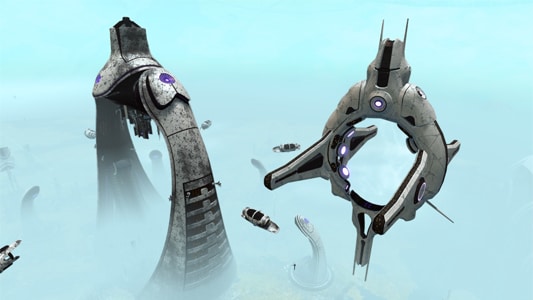 The Solanae Dyson Sphere is massive, but the reality of it doesn’t set in until you actually go there and you look up, see the star, and the space and the ceiling beyond. It makes one feel… insignificant.

Between the Voth and the sphere’s unknown technologies, our operation here is under constant threat. The Republic and its allies may control the REDACTED that leads here, but the battles have left us barely able to supply our missions to the sphere. We simply don’t have enough personnel, enough ships.

Every day, it seems like something in the sphere conspires to destroy us.

It’s exhilarating. It is, as the humans say, an adventure. With the launch of Season 8: The Sphere, we’re bringing a new kind of adventure zone to you. Like New Romulus, this zone is a large area where you can explore freely, meet other players, and find missions or tasks out among the far reaches. Unlike New Romulus, this adventure doesn’t take place on the surface of a planet – it happens inside of a distant Dyson Sphere!

The Romulan Republic has established a base of operations inside of the sphere, but they don’t have the resources to do it alone. In order to better understand the sphere and benefit from its technology, the Republic has invited its allies in the Federation and the Klingon Empire to participate in their new Dyson Joint Command operation. The best officers of all three stellar civilizations will have an opportunity to explore the sphere, acquire new technology, and contribute to the defense of allied operations in this distant part of space, far from home.

The Solanae Dyson Sphere is so large that the joint command operation only controls a small segment of interior space. Not far from the terminus of the REDACTED, though, is a large force of entrenched Voth. The Voth have brought in an armada through a set of doorways in the sphere, with the goal of taking control of the sphere and mastering its technology. Because of the presence of REDACTED in the sphere, though, the joint command operation is committed to stopping the Voth before a disaster occurs! Sphere space is divided into three major zones. In the Allied Zone, joint command operations hold sway and the allies conduct scientific and military missions to defend their territory and shut down the sphere’s dangerous operations. In the Contested Zone, the allies and the Voth battle back and forth for control of several strategically important towers that control parts of the sphere’s energy distribution network. Occasionally, we're able to set up a beachhead in the Voth Zone. Here, the Voth control the space around the doorway that exits the sphere, and allied ships conduct daring raids to disrupt Voth operations.

In each zone, you’ll have missions to complete based on the operations that Dyson joint command needs done – this could mean fighting Voth ships, shutting down power systems of the sphere, clearing an area of automated defenses, or performing scientific studies. Finishing tasks in the adventure zone will reward you with Dyson Marks and Commendation, used with the Dyson Joint Command reputation (more information about the new and improved reputation system will be posted in an upcoming blog!) to gain epic rewards!

In addition to completing missions, you’ll have opportunities to explore the mysteries of the Solanae Dyson Sphere. Finding unusual features and studying them will award you with exploration accolades or even short missions that aren’t part of the Dyson Joint Command operations. In some areas, you also can find rare or very rare Duty Officer Assignments that tell more about the story of the sphere, its builders, and their mysterious disappearance.

Once you’ve finished “Sphere of Influence,” our upcoming featured episode that unlocks the path to the Sphere, you can travel directly there from the Tau Dewa Sector Block. We look forward to seeing you in the Sphere – Dyson Joint Command is going to need all the help that they can get!