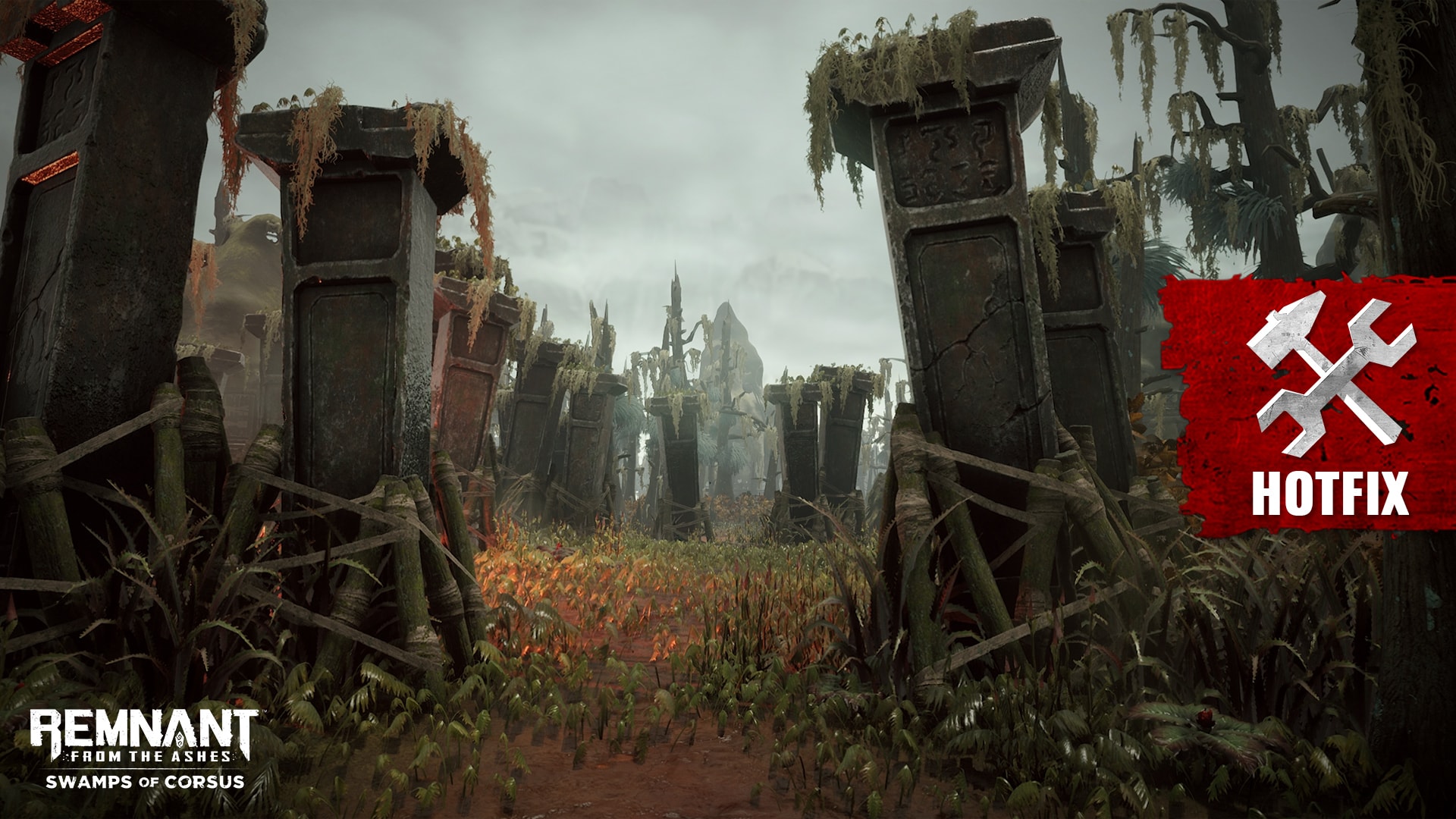 A hotfix for the Swamps of Corsus update is being released that fixes a number of bugs, rebalances some numbers, and adds a few quality of life changes to Remnant!

Adjusted boss health and damage on Hard, Nightmare, and Apocalypse

DEVELOPER COMMENT: Many players noticed a difficulty increase across the board (on Hard and Nightmare) so we made a few tweaks to bring the health and damage values back in line. This should give a much smoother experience across the board and remove some of the more punishing encounters… outside of Apocalypse, of course!

DEVELOPER COMMENT: We identified an issue that prevented some DLC items from spawning in Campaign and Adventure Mode. Rerolling these areas will give them a chance to spawn like all other items. Hopefully, you can find some cool builds with them!

DEVELOPER COMMENT: The aim-cancel window on Neutral Backdash (non-Leto) was a few frames too early allowing for near permanent backdash invulnerability with Akari 1-PC and Ring of Evasion (with enough stamina of course). We adjusted this to keep things honest.

DEVELOPER COMMENT: A handful of Burn and Bleed stacks were not getting the proper damage buffs from the damage source. We fixed this!

DEVELOPER COMMENT: We noticed players had lower consumables and an abundance of ammo in Survival (leading to lack of Ammo Box purchases). To fix both issues at once, we replaced a small percentage of ammo drops from Supply Crates with consumables. We also added a Survival Version # to the Stats Page so players can see which versions new world records are set on!

DEVELOPER COMMENT: We noticed that at higher levels, bosses were dying a tad too fast. We slightly increased the general health gain per level and added a little bit extra for bosses. This should make them last just a bit longer but they should still be pretty easy once you get a great build going!

DEVELOPER COMMENT: Survival Barkskin and Divine Nectar was adding a Flat value to the player instead of a Percentage. This means that a base armor of 50 would end up with 350 armor with max Barkskin. With the changes to percentage, it brings all armors back in line and prevents Daredevil Charm from gaining almost the same armor as an actual armor set… but with no penalty! This change should make most runs a bit shorter (both with and without Armor) but we fully expect to see the most dedicated players set crazy records!

DEVELOPER COMMENT: Talisman of Perseverance was always meant to be an Account Bound reward in Survival Mode. We got this hooked up properly and moved it to 50 total kills. If you’ve already obtained 50 total kills, simply beating 1 additional boss should fix it. We also moved Loop of Prosperity to 25 total kills. As with Perseverance, if you already have 25 kills, 1 additional boss kill should unlock it. If you have obtained Perseverance in Pan, it will remain with your character but will not be Account Bound until you unlock it in Survival Mode.

Undying Cooldown now has a secret…

DEVELOPER COMMENT: World Stones were resetting the Ruin cooldown giving a “free revive” every single new biome on Survival. We fixed this. However, we also added a hidden feature to Ruin. Can you figure it out!? =O

No longer stacks with other players

Slightly reduced Ramp increment from 0.3 to 0.25

DEVELOPER COMMENT: When we buffed the Beam Rifle for the DLC, we neglected to remove the hidden “team buff” feature (which we never even explained to players). This resulted in double and triple stacking Beams doing max damage right off the bat – a little too strong! We also left the core damage but reduced the leniency in the debuff. It still does more sustain damage than any other weapon in the game (by a good margin) but requires holding the Beam on targets more consistently.

DEVELOPER COMMENT: While we want you to be able to gain Mod power quickly… this may have been a little too fast, no? Fixed!

No longer deals damage to allies

DEVELOPER COMMENT: This was annoying. We fixed it! Spam away!

DEVELOPER COMMENT: This has no effect on normal use… unless your normal use was casting it point blank to do maximum damage. If that’s the case. UNCOOL!

Increased Duration from 10s to 15s

DEVELOPER COMMENT: Flicker Cloak at lower levels took a little too long to build. At higher levels, the build is near instant. We reduced the Power Requirement for easier access at lower levels, Increased the Duration, and added a cooldown to prevent constant spamming (invulnerability) on higher difficulties.

DEVELOPER COMMENT: Rift Walker became highly abusable once Mod generation was near instant. To fix this, we added a short cooldown to prevent spamming it and remaining invulnerable forever.

Reduced Power Requirement from 600 to 350

DEVELOPER COMMENT: We wanted this to be used a bit more frequently but without spamming all 5 at once. We reduced the Power Requirement by almost half and reduced the total Charges by 2.

Increased range from 4.5m to 5m (to match Scrapper)

DEVELOPER COMMENT: Go forth and find the loots. Sorry about that one!

Increased Damage Bonus from 25% per piece to 30%

DEVELOPER COMMENT: The previous version was approximately a 20% damage buff against all pure armor and damage loadouts. However, it came with a heavy penalty of no protection. This worked decently in Campaign but due to Flat Armor Gain in Survival, it became too strong. However, with the Armor gain issue in Survival fixed, this trinket became less worth the risk. We increased the total damage over all DPS builds by approximately 30% (give or take) in all modes.

Jewel of the Black Sun

Increased Duration from 15s to 20s

DEVELOPER COMMENTS: Small buff to bring it above other rings due to the requirement. Increased the duration and the damage buff just a bit!

DEVELOPER COMMENT: This is one we missed. Fixed now!

Fixed an issue with healthbar sticking up for clients in multiplayer

DEVELOPER COMMENT: Nothing to see here… at least, not anymore!

Staggers should no longer prevent him from returning from a Teleport

Slightly reduced damage for All Difficulties

DEVELOPER COMMENT: The Queen was a bit too "bullet-spongey" and a bit too punishing, particularly on Hard and Nightmare difficulties. Along with the difficulty mode adjustments, a small reduction in base stats should put her in a good spot while keeping the challenge alive. If you want an insane challenge, though, try her on Apocalypse difficulty!

Fixed a crash caused by attempting to get input devices

Fixed some general audio cues. Nothing too crazy!