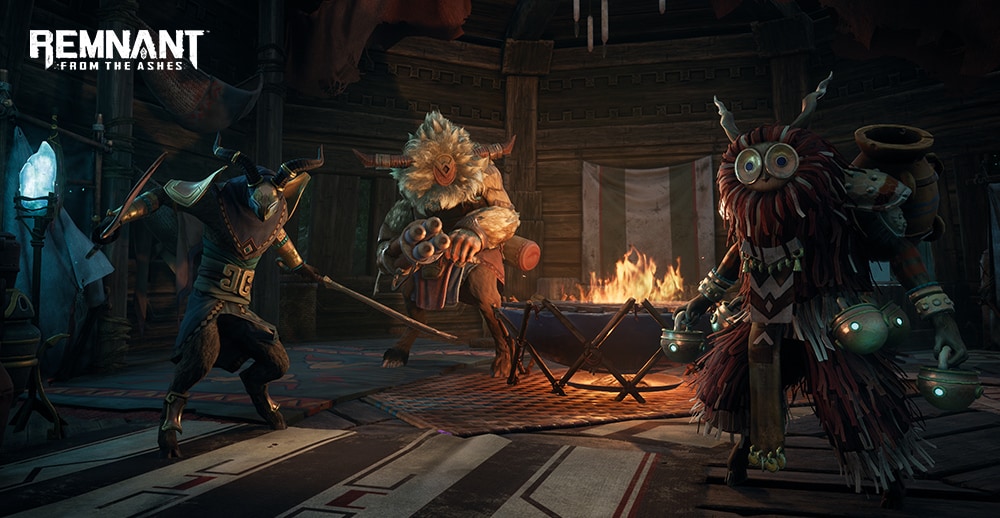 Most of the Pan are accomplished warriors in their own right, deadly not only with sword and spear, but also with a staggering array of exotic ranged weapons. Male and female Pan are equally responsible for the defense of the tribe or the high caste. Discover more about the denizens of Yaesha below!

The Swordsman is the most basic and prolific Pan enemy – the nobility’s foot soldiers conscripted from the villages of the Commoner’s caste, the Gul. The creature is lightly armored and wields two wickedly sharp blades. Although the Swordsman is one of the smallest Pan, don’t let its small stature fool you. They are pound-for-pound some of the most lithe and reactive enemies in the entire game - able to nimbly dodge gunfire, close the distance through lightning-quick dashes, and level a flurry of vicious attacks once it engages the target in melee. If you miss a few shots or perform an ill-timed dodge, you may find yourself surrounded and quickly overwhelmed by a barrage of devastating sword strikes. 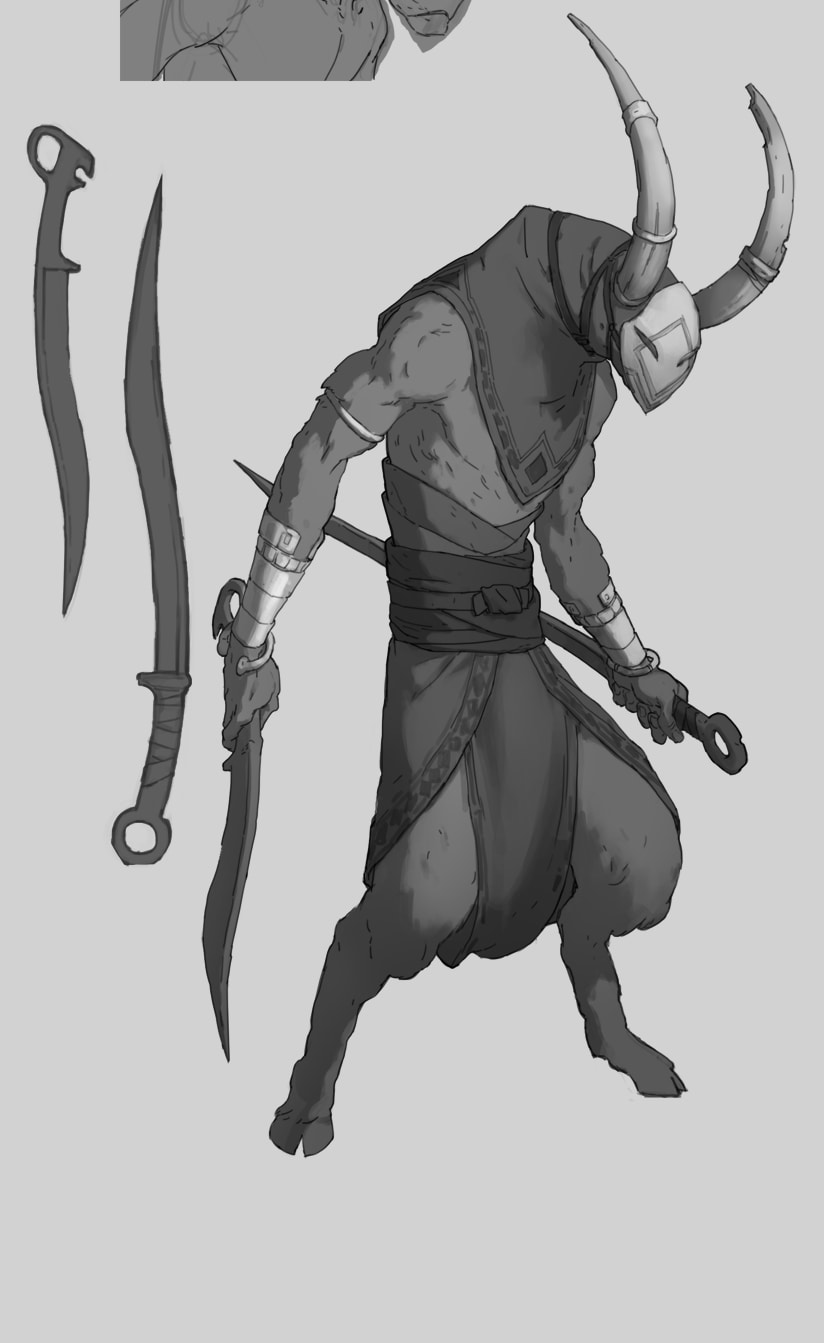 “One aspect that I love about the Pan Swordsman is that they are relatively easy to deal with when engaged from a distance, but once they close the gap into melee the encounter turns into a methodical dance of death. When they attack in groups, evading their strikes becomes an exercise of reaction and timing. Small steps in one direction or another can spell the difference between slipping behind the enemy for a counterattack or opening yourself up to a barrage of deadly blows. Just one Swordsman mixed in with any other enemy type will force a player to shift his/her strategy. Do you quickly try to stagger the Swordsman? It might evade. Are you leaving yourself open to attack? You may have to dodge roll. And rolling is precisely the opportunity the Swordsman is looking for…”

The Gul tribes are forbidden from living within the protective walls of the Ziggurats. They have grown accustomed to the hardships of living in the open wilds and the rigors of such a life. Some Pan have grown to immense size and strength often enlisted to be either the builders or protectors of these tribal villages. The largest of the Pan often become Impalers. The Pan Impaler is a creature from the Brute class – the biggest, toughest, meanest enemies in the game. Even for a brute, the Impaler is particularly intimidating due to its immense size. The creature has a very straightforward approach to combat - it loads up its giant pepperbox launcher with four enormous spears then strafes its targets from a great distance. Each spear is the size of a small tree and has enough power to knock the player flat. When the target moves too far out of range, the creature will quickly bridge the distance by dashing forward. When pressed into melee, the creature will swing the spear-tipped pepperbox like a giant scythe. 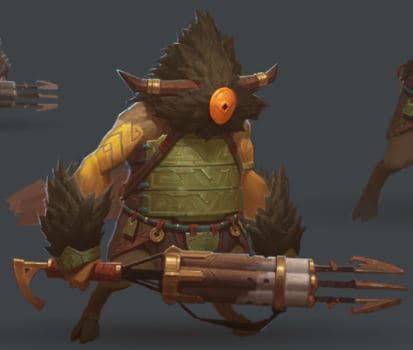 “When the Impaler enters a fight, it can make a whole team of players take cover. It is not a hard target to hit, but it is a hard target to stop. It takes an immense amount of firepower to stagger the creature and each hit from its weapon can bring most heroes to their knees. It is your choice to leave it at a distance and fight behind cover. The Impaler’s gun may be its greatest asset, but it also has some unique weaknesses. Have fun figuring them out.”

Members of the Low Priesthood (called the Vaunnt) have largely fallen out of favor with the Pan nobility. Many of these outcast Priest continue to revere the old ways and have become mendicants, catering to the needs of the common Pan. The Thunder Tusk is one such creature, a shaman of sorts – both healer and destroyer; both revered and feared by the Gul tribes. The Thunder Tusk is a strange looking Pan that lumbers around the battlefield carrying a large, misshapen sack on its back.  Don’t let its comical looks fool you. That bag on its back is brimming with gourds filled with a volatile liquid. The Thunder Tusk lobs these gourds at its enemies with uncanny accuracy and speed. On impact, the gourds will explode, showering the area in fire and shrapnel. 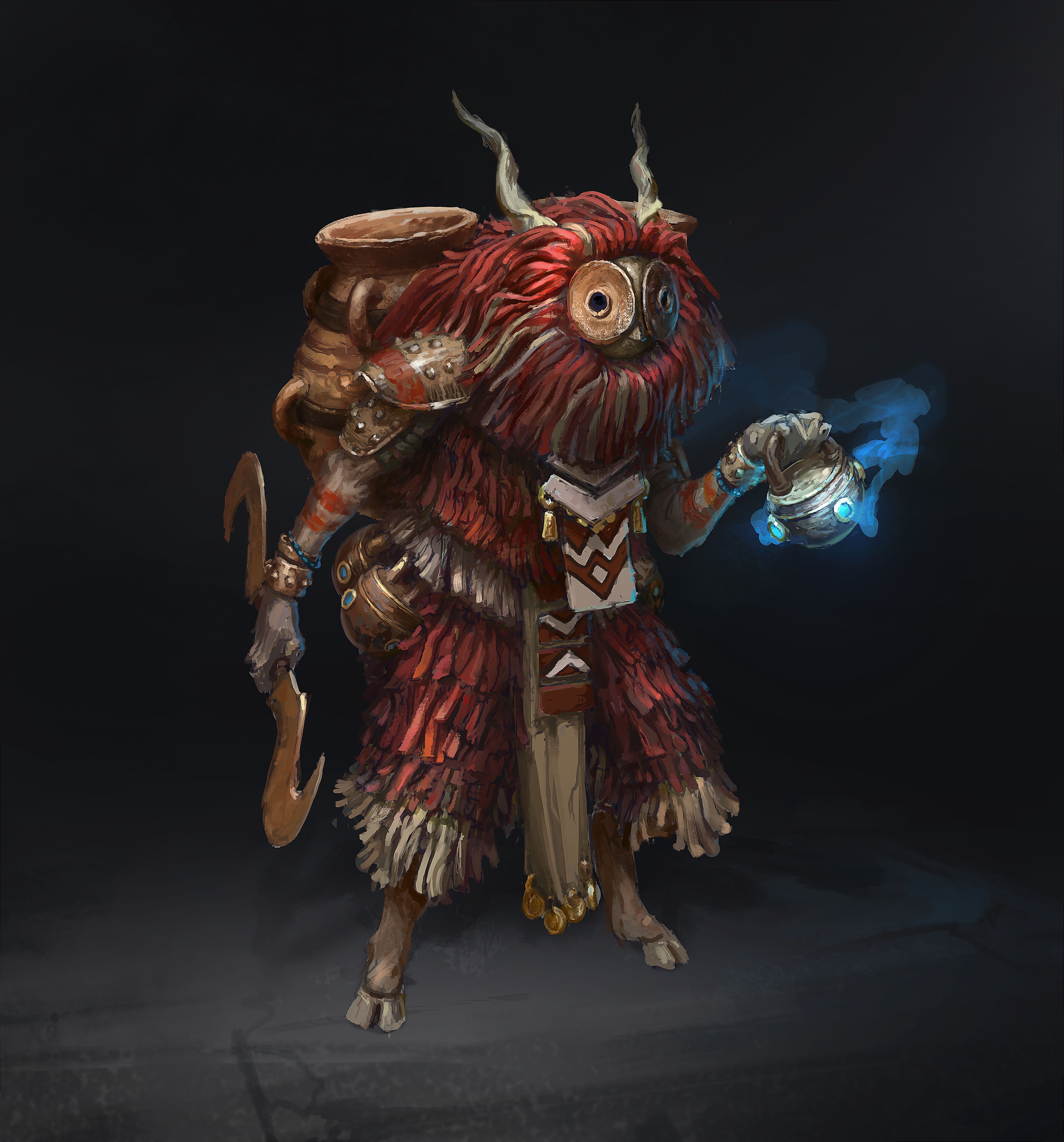 “The first trick to learning how to fight the Thunder Tusk is in realizing that evading the bomb throws buys other Pan time to close the distance to you. The creature is rarely found alone and, while you’re busy dodging gourds, his entourage is maneuvering to surround you. Once you are engaged in melee and escape has been cut off, the Thunder Tusk will deftly lob bombs into the ring… you won’t last long after that. So, don’t be afraid to retreat and regroup - separate the Thunder Tusk from the other Pan, then pick them off at your leisure.”