Prepare yourselves, The Trials are finally upon us!

This brand new content update brings several robust and exciting new features to the world of PWI. Read on to learn more!

This tranquil seaside town can be found to the south of Mist Mountain, at about (534, 237). Players level 100 and above will be sent here to fulfill a noble new task - bringing  two lovers together whose union has been impossible due to their physical states. High level players will also find new 100+ Crazy Stone and Order of Justice quests in this zone. 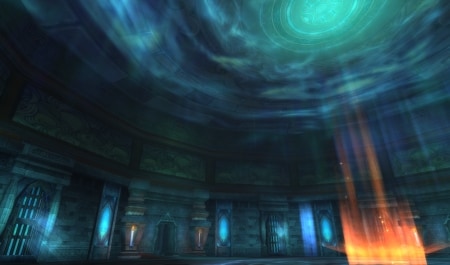 A set of nine teamwork-based missions that will challenge even the most powerful faction.

Up to 100 characters can take part in each Trial! Complete the Trials to prevent the Grand Demon Lord from establishing a foothold on our Perfect World!

To begin the trials, talk to the Faction Manager near the center of your Faction Base, and choose the Guardian Trials quest option. The Teleporter of Balance will then spawn nearby, and you can speak with him to proceed!

Characters must be level 80+ to participate in the Trials, and level 100+ to open chests within them.

*Be sure to take the "Begin Quest" and the "Reward Quest" to get full credit.*

You must work your way through each Trial in order from the first to the ninth. If you fail a Trial, you may try again, starting with the one you just failed (as opposed to being sent back to the first Trial).

*Progress within the Trials will reset every Wednesday, so schedule your attempts accordingly!*

In the unlikely event that you complete all nine Trials, you will have the option to run through them up to two more times within the week!

Rewards: Besides saving the world, the rewards for success in the Trials are materials needed for upgrading Rank 8 gear into "Awakened" gear!

Our Earthguard brethren have contributed enough to the war effort to finally make it into General Summers' good graces! They can now obtain and wear Rank 9 gear!

Using materials obtained from the new faction Trials, you can now upgrade your Rank 8 gear into "Awakened" gear! You can do so at the new forges in Archosaur at (573, 661)! Upgrading your R8 gear will increase its gear level from Lv. 14 to Lv. 15, and increase its power accordingly. These forges will also allow you to customize your upgrade by re-rolling attributes and stat values.

You can now upgrade your Rank 9 gear into a new "Ascended" set! Trade your Rapture and Uncanny Crystals (can be obtained in the Palace of Nirvana) for new Summerwind Tokens at the Celestial General (129, 855) in the City of a Thousand Streams! Turn-in these Summerwind Tokens at the nearby Commander-In-Chief (129, 854) to get your remarkable new gear!

Have you ever wondered how you stack up against the strongest players on your server? The new Damage Ranking feature should help reveal at least one part of what constitutes real power - brute strength.

At a cost of 20,000 Coins, you will be given six minutes to defeat a non-aggressive illusion monster. This foe has 1,000,000 HP, and he will be regenerating health, so defeating him may be a tall task for the weak. However, if you do defeat him, your strongest blow will be recorded and placed among the server rankings, which can also be seen at the NPC.

You can now upgrade your faction base to level 30!

Due to popular demand, game mechanics and pvp rules within the Secret Passage dungeon (567, 743) have been modified:

On a final note, we really hope that you enjoy tackling the new challenges that this content update has to offer, and we'd like to thank you again for playing PWI!

Take care of each other!