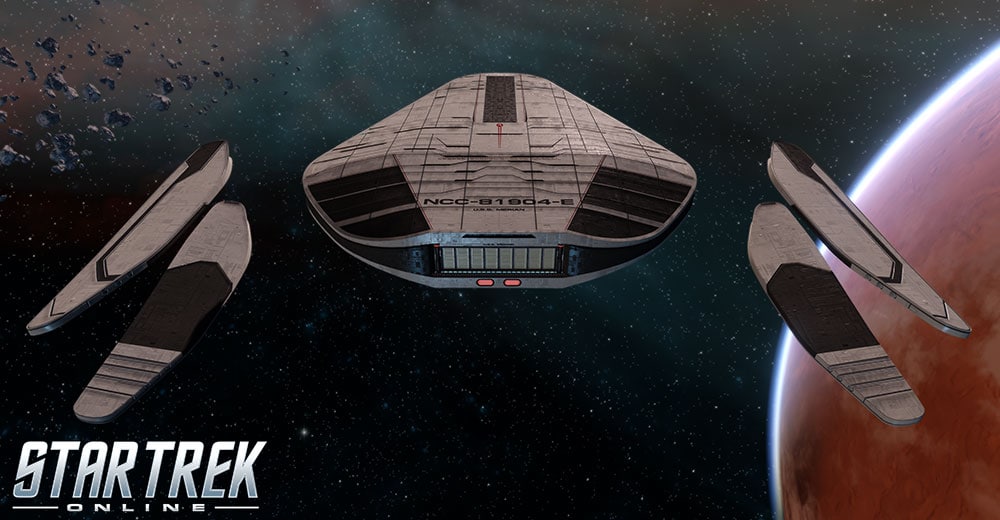 Starting on May 10th, 2022, players on PC will have the chance to obtain and captain the Merian Command Science Dreadnought (T6). This rescue and support vessel serves an important role in the events that unfold in Season 4 of Star Trek: Discovery, and will soon be available in Star Trek Online for captains to add to their fleets.

The United Federation of Planets is never going separate itself from its need for starships that are specialized in rescue and relief missions, and the Merian-class was well-known for serving this role with distinction even during the dark times following The Burn. Its specialized systems are focused on being a bulwark against harmful elements, be they enemy vessel, or naturally-occurring stellar phenomena, to provide protection and support for those most in need.

This ingenious shielding provides multiple functionalities. In addition to providing peerless immunity to all forms of harmful Radiation, it also boosts Damage Resistance to all other forms of Energy Damage by a respectable amount.

Incoming Energy Damage will also be converted into a 5km Radius pulse that deals Radiation Damage to Foes, and Restores Hull to Allies, based on the amount of incoming damage that triggered the pulse and was Resisted (prevented) by this shielding and any other forms of Damage Resistance your ship may have.

The pulse has its limits. Healing it provides cannot exceed a value of 5,000 per pulse, and the Radiation Damage dealt to foes cannot exceed 10,000 per pulse. The field will not generate a pulse from Damage-over-Time effects, or incoming damage below a certain threshold.

Activating any Bridge Officer Ability which increases Damage Resistance Rating will also provide a boost to your Control Expertise, Drain Expertise, and Exotic Particle Generator skills. This bonus lasts 15 seconds, and may be stacked up to 5 times.

Abilities that will trigger this effect include:

These fighter pets are unlocked in their stores listed below as long as you own this ship. Once unlocked, there are no equip restrictions, and may be used on any ship that has a hangar bay.