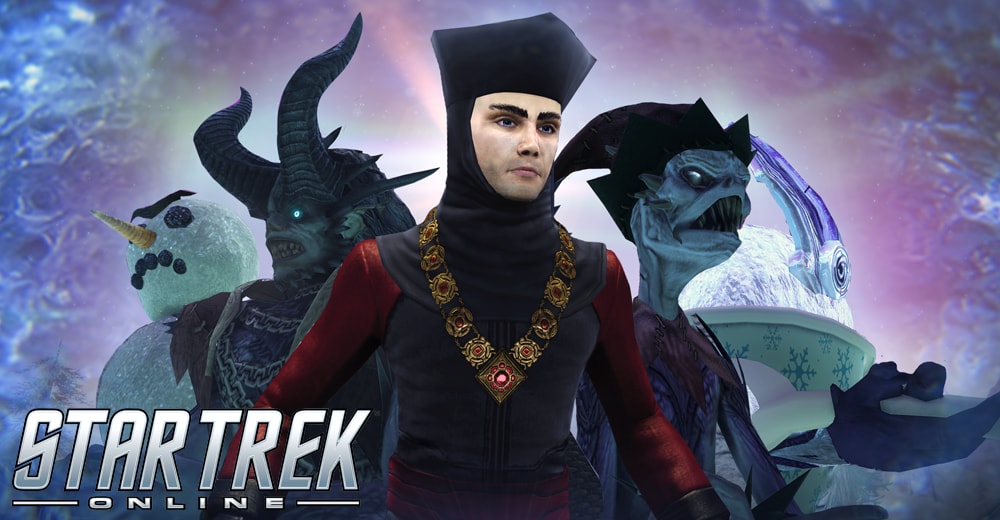 The seasonal favorite from years past is returning once more to Star Trek Online! Q proudly invites personnel of all ranks, allegiances, species, cosmological variances, and molecular stabilities (or lack thereof) to ring in the holiday season, and visit his Winter Wonderland for fun, frivolity, and prizes!

Participate in your choice of Winter Wonderland Activities to work your way toward obtaining the fabulous new Tier 6 Starship! This ship will be revealed on tomorrow night's Ten Forward Weekly, and complete details of this ship’s capabilities will be contained in a separate Dev Blog.

Like last year, this year’s festivities will be integrated into our recently released Event Interface, as part of your Mission Journal. This means that, just like last year: Daily Progress toward earning your new starship can be obtained by participating in any of the following activities:

The first completion of any of the above activities will fulfill your Daily Requirement for your entire account, allowing you to pick and choose how you earn your way to a new starship. Play whichever activity you enjoy most, or change it up each day for greater variety!

The Event System will also offer instant and immediate access to visit the Winter Wonderland from most non-combat maps in the game, simply by pressing the “Transwarp” button on the Event interface. You don’t even have to talk to Q to get there – he’s allowed us to bring the Wonderland to YOU.

Each of the above activities, as well as others you can participate in during the Winter Event, will still reward you with the various Holiday Ornaments which can be used in different denominations to purchase yourself a variety of rewards from years past, as well as a number of new additions that will arrive with the re-launch of the Event this year!

Put a chill in your enemies' bones with this year's Nanopulse Bat'leth, a glacial variant whose color calls to mind the coldest ice.

This year, your collection of winter ornaments could be used to unlock a brand new ground set, based on the chilly ways of the mysterious Breen. There are four items in this set: Armor, a Personal Shield, a Kit Frame and a Pistol. Equipping all four will unlock a new set bonus. The set references and uses a new ability, Polar Blast, an AOE of cold damage centered on an enemy. 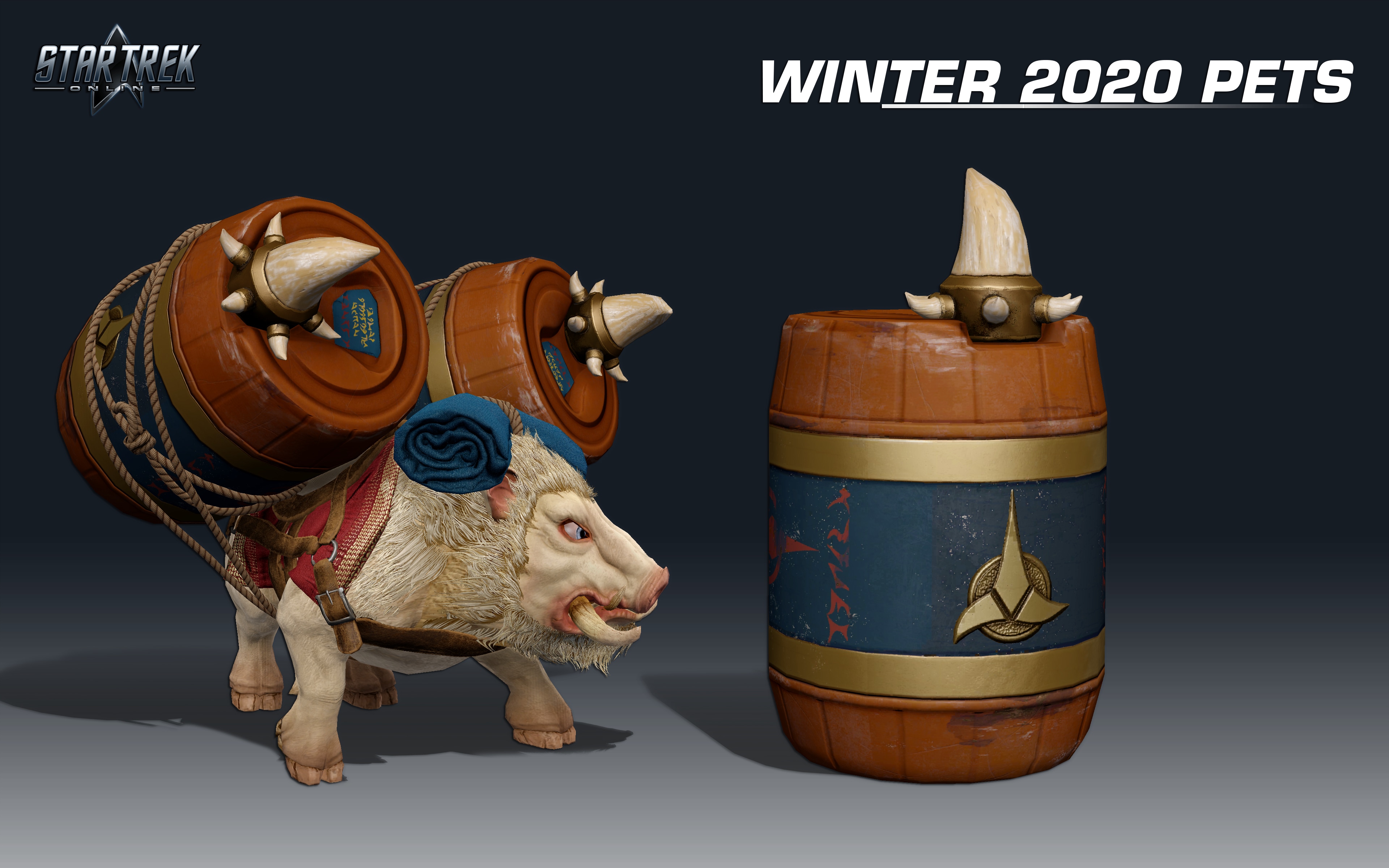 After freezing your enemy with the cold, warm up again with two new vanity pets! The Warnog Rescue Targ doesn't bring that tiny cask that earth canines use for rescue, it carries enough Warnog for a Klingon army! And the Barrel of Warnog is...exactly what it sounds like. It's a barrel. Full of Warnog. 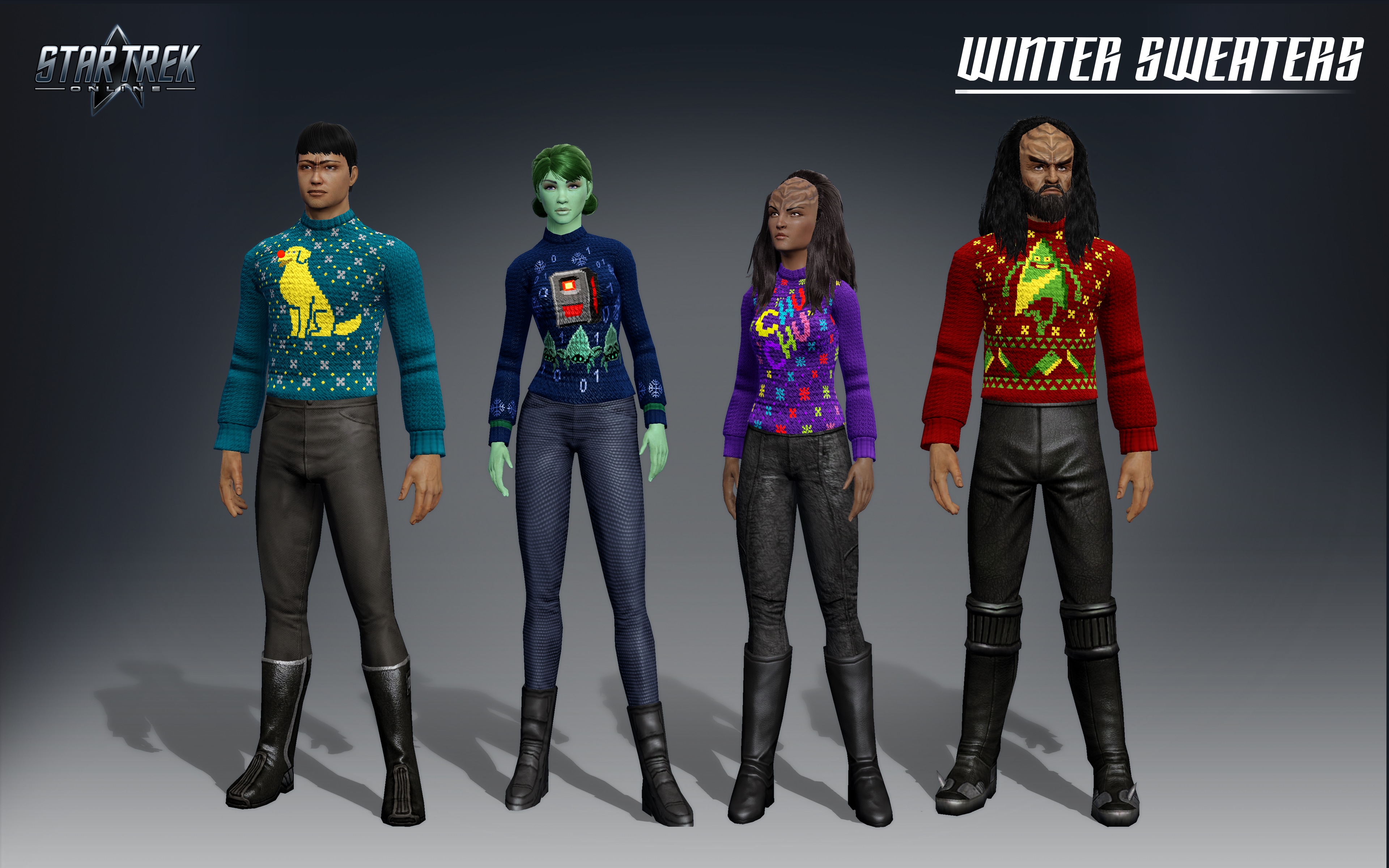 Originally developed for those times that The Cerritos loses life support - again - these sweaters celebrate some of our favorite characters and moments from the first two seasons of Star Trek: Lower Decks. Bundle up with sweaters based on Chu Chu, The Dog, Badgey, and everyone's favorite evil Jeffrey Combs computer, Agimus.

Don't you want an Epohh friend? This year's variant is the same glorious, glacial blue as the Bat'leth.

Q’s Winter Wonderland will be available from December 7th, 2021 to January 6th, 2022. This event will run simultaneously across all platforms (PC and Console). Join us to celebrate this festive season, and ring in the new year!