Now coming to Neverwinter is a much-requested feature: guild alliances. This feature will allow several guilds (up to 13) to group together in an “alliance” -- a sort of “mega-guild”. By grouping together, guilds in an alliance will be able to do things that they would have had trouble doing on their own.

The main purpose of alliances is to make it easier to find other players to do tough activities. If it’s late at night and you can’t find other guild members for a Castle Never run, or if your guild is small and you have trouble getting enough people together for a Dragonflight, you’ll be able to call on your allies for help.

If you’re part of an alliance, you’ll be able to go to their Strongholds as well as your own. That means you can join them and do Heroic Encounters on their map, or even have several different guilds in an alliance all group up to tackle the dragons on one guild’s map! And while you are there, you can shop at their stores. That means members of small guilds will have access to equipment that would otherwise have been out of reach.

And if you go to the guild coffer (your own, or an ally’s), you’ll have access to all the different alliance guild coffers from that UI. So if you want to donate a resource, but your guild’s coffer is full, you can donate the resource to an ally instead. You’ll still get full credit in terms of guild marks.

Guild leaders will be able to turn off certain features, like incoming and outgoing donations of specific resources, or map visits (if the guild’s Stronghold map is in danger of becoming full, for example). And certain things just won’t be allowed (for example, you can’t go to another guild’s map and start construction of a building there!). 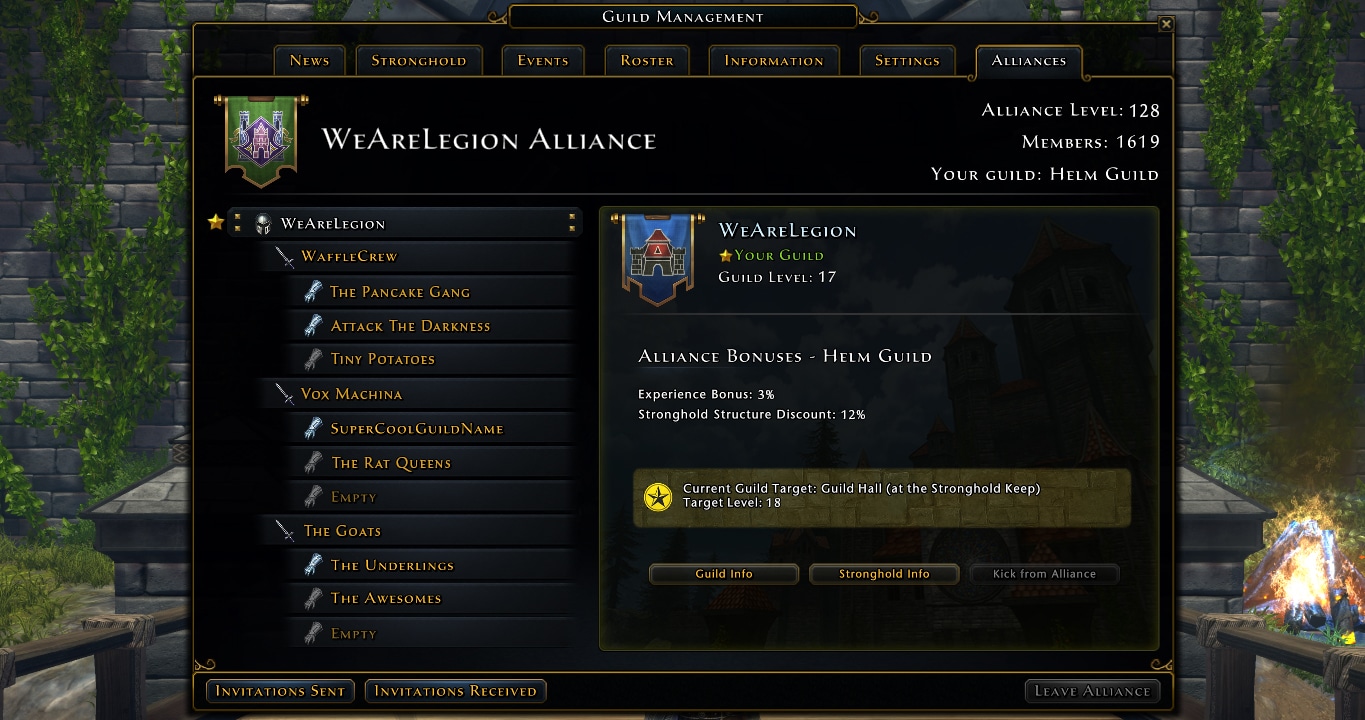 There will be benefits for all sizes of guilds. Small guilds especially will appreciate the chance to shop at a larger ally’s store. Large guilds should have an easier time getting guild marks, if they have some smaller allies who can still use certain resources that the larger guild has maxed out. And everyone will get a bit extra from the alliance bonuses.

To start an alliance, or expand an existing one, a guild leader just needs to invite another guild leader to join (use the new “Alliance” tab in the existing guild UI). Every alliance has one top-level “Helm” guild, which can invite up to three “Sword” guilds to join them. Each Sword guild can invite up to three “Gauntlet” guilds, for a total of 13 guilds in an alliance. Guilds you invite stay with you when you move, so if a Sword guild decides to strike out on its own, when it leaves its alliance it will become the Helm guild of a new alliance, and any Gauntlet guilds it has will move with it (becoming Sword guilds, which can then invite Gauntlet guilds of their own).

So go forth, find your allies, and may the dragons that scoffed at you before learn to fear your combined might!