Gond, the Lord of All Smiths, has returned to Neverwinter to offer more encouragement in the ways of crafting and innovation – this time with a new creation of his own!

Let the engineering begin on Thursday, March 24 at 7AM PT (or after maintenance)

The engineering will come to a halt on Monday, March 28 at 10AM PT (the Last-chance Vendor will remain on the event dais for a short time afterwards.) 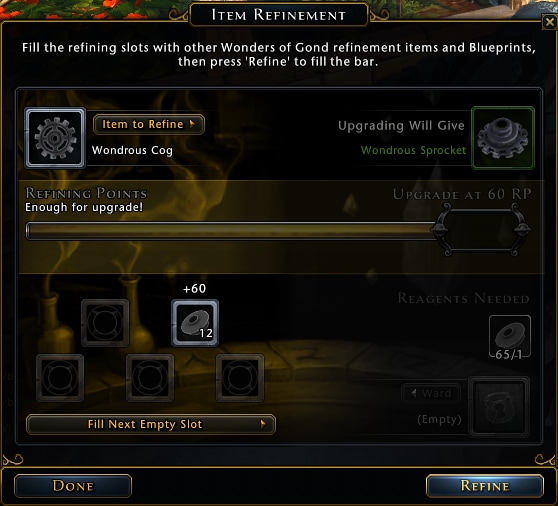 What rewards can players earn? Adventurers will continue to upgrade the Wondrous items until they can create the pinnacle device, the Doohickey. This device represents the pinnacle of mechanical ingenuity and would impress Gond himself with the fine craftsmanship. Not only can you use this item to deal damage to your foes, this item can be turned in for a chance to receive the Apparatus of Gond Mount or the new Embellished Apparatus of Gond!

Located in the Event Dais, in Protector’s Enclave, is a vendor where players will be able to turn in event items for various rewards:

A grand reward for reaching the highest level of craftsmanship and ingenuity during the event. This pack contains a chance to gain the unique Apparatus of Gond along with a chance to collect many other items including the Blacksmith companion. Updates since the last Wonders of Gond