A note for new players: enchanted keys used to open lockboxes can be purchased in the zen market and may be obtained daily via our VIP program.

Golden lion figurines are created as pairs and those found in the Firemane Lockbox are no exception. The Swift Golden Lion serves its owner as a legendary mount and features the powerful passive power Providence. With the power equipped there is a chance that when the equipped player or a teammate takes damage that they will be healed for 10% of their maximum hit points and that the equipped player will be granted a stack of radiant weapon. 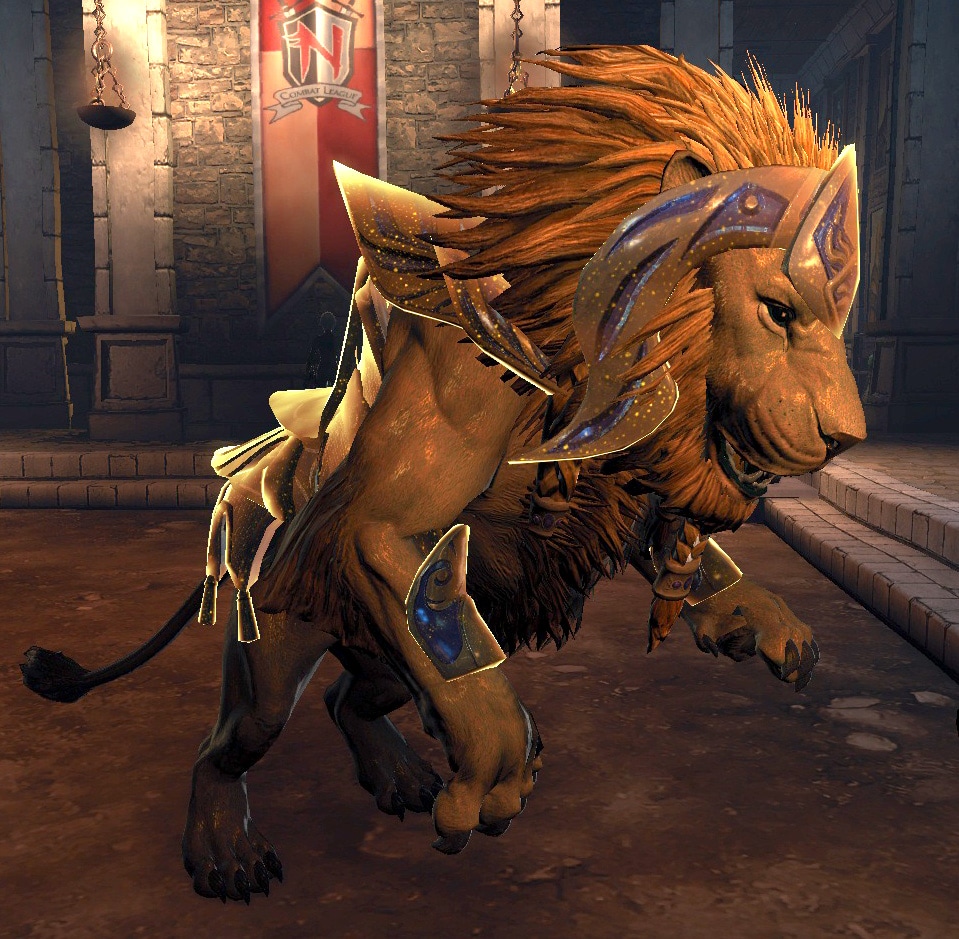 Radiant weapon is a new mechanic featured prominently in both golden lion’s abilities. The effect grants the bestowed player an additional 2% damage as radiant damage for 12 seconds. The effect may stack up to a maximum of 8 times for a total of 16% additional damage. Whenever a new stack of radiant weapon is applied its duration is reset. However, because Providence may not occur more than once every 15 seconds it will not be possible to maintain multiple stacks with that power alone.

Other powers like the mount’s active power—Aureal Armament—may also grant stacks of radiant weapon, albeit in differing ways. Upon activating Aureal Armament the swift golden lion will crash into the targeted enemy and knock back all nearby foes. Nearby allies will receive a shield for 100% of their maximum hit points for 10 seconds. When the shield expires, should any of its hit points be remaining, the affected player will receive up to 3 stacks of radiant weapon. Aurulent Armament is a powerful defensive ability that recuperates much of its usefulness in offense should its defensive element not be utilized.

The second lion figurine, the Stalwart Golden Lion serves as a companion and steadfast defender. This companion is also capable of granting stacks of radiant weapon. It may do so in one of two ways. The first, its active companion bonus allows any active companion to grant its owner 1 stack of radiant weapon by activating any power. The effect may occur at most once every 15 seconds. The lion is also capable of granting radiant weapon with its powerful Aurulent Roar ability. In addition to generating substantial threat in a radius around the lion, nearby allies are granted 2 stacks of radiant weapon. Together these abilities can be utilized to maintain a powerful damage enhancement.

In addition to his roar, the steadfast lion also has access to Aureal Claw, a powerful swipe that deals physical damage followed by radiant damage over time. The unique nature of this companion doesn’t end with his mechanics. The lion also features unique visual effects. Upon entering combat, his radiant aura materializes into a suit of solid armor. The sight of the armor taking on its corporeal form as your companion enters the fray truly sets him apart from other companions. Alongside the Firemane Lockbox’s release the trade bar store will also be receiving an update including an epic Turmish Lion mount. Unlike the golden lion figurines this is no magical creature but a primal beast raised from cubhood as a dependable mount. Its passive Ferocity ability has a chance to grant its owner a stack of ferocity whenever they or a party member takes damage. Ferocity may stack up to 3 times, each stack granting 2% additional damage as physical damage. Another minor update to the trade bar store includes the addition of dusk boots. For those who have yet to complete their set, it is now available in the trade bar store in its entirety.

The various packs and caches featured with this lockbox have also seen a number of updates since our last lockbox, with only the Wanderer’s Artifact Weapon Pack returning untouched. The new artifact pack—Nobanion’s Artifact Pack—features a chance at the Black Ice Beholder, Lantern of Revelation, Rod of Imperial Restraint, Greater Cloak of Black Ice, Greater Belt of Black Ice and the Greater Imperial Waistband of Honor. Unlike previous artifact packs it now also features a chance at a Greater Mark of Potency and a Preservation Ward.

The new artisan’s profession pack no longer features a chance at the Forgehammer of Gond, however, for the first time we are releasing legendary tools other than the Forgehammer! These tools can be used to further enhance the chance of obtaining high quality results in profession tasks. The Firemane Companion Pack also features an overhaul with the addition of a chance to earn an epic Wayward Wizard, Man at Arms or an Apprentice Healer.

Insignias are back as well, this time things have been simplified with a single Firemane Insignia Pack taking the place of 5 specialized packs. Just like with previous incarnations a new assortment of insignias await you, each box contains one epic insignia and two rare insignias. The enchantment cache will also receive an update. The newly minted Demonic Enchantment Cache features a chance at a shadowclad, dread and demonic enchantment. Last but not least, a new stronghold focused box—the Regal Stronghold Pack—will now rarely appear, loaded with 2-3 epic vouchers of highly sought after currencies.

The Firemane Lockbox will be launching with the Guild Alliances update. We look forward to seeing you put the golden lions through their paces and discovering all of the Firemane Lockbox’s many other treasures soon!