With the upcoming changes to the Mount System in The Maze Engine, every Mount that you already own will be getting converted to work with the new system. Internally, this is a pretty big deal – lots of changes went in under the hood to make the new system work. However, for you as a player, the intent is for it to seem like very little has changed in the way you actually use your Mount.

When you login for the first time after the new patch, you should see a screen like the one above for your currently equipped Mount, which was the Blue Ribbon Pig in my case. It will automatically equip itself in the new way, and slot any Combat, Equip, and Movement powers into the appropriate slots.

For those of you with a bag full of mounts, however, you’ll have a little bit of work to do to unlock all of the new things your Mounts have to offer you. But fear not! Soon your Blue Ribbon Pig will be running with the Speed of the Wind!

You’ll most likely want to go through and equip each of your Mounts again. This will unpack all of your new Mount goodies – making sure you have each of your Mounts available to select for appearance, your fastest speed, and any Equip or Combat powers you might have. You will also need to equip any Mount you want to be able to have in your new Stable so you can access their Insignia slots and unlock your Insignia Slot Bonuses.

After you’ve done that, open the Mount tab of your Character Screen. It will look something like this, especially if you are correctly using the Blue Ribbon Pig: 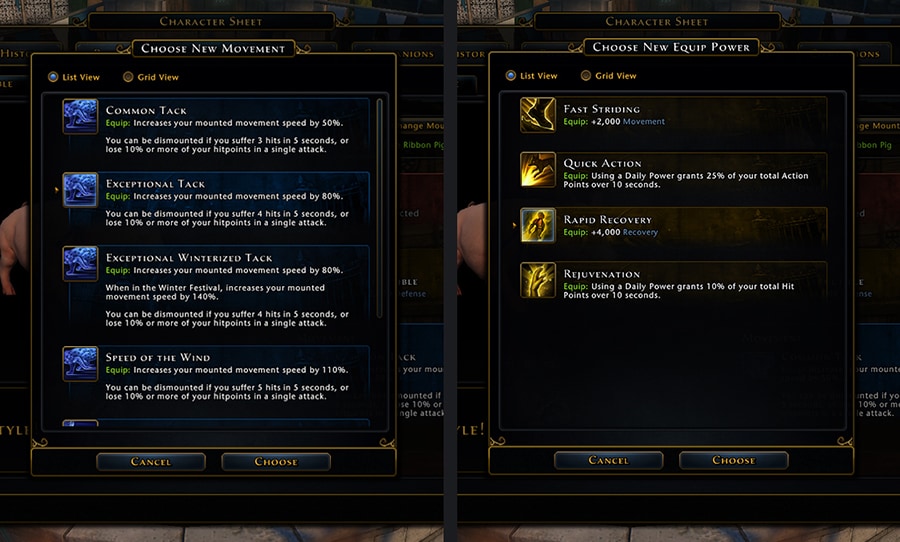 You’ll want to click on the “Change” button listed to the side of any of your Mount powers that you want to adjust. In my case, I want to go and change my Movement power to Speed of the Wind, and pick an appropriate Equip power. I think Dominant Force is appropriate for my Blue Ribbon Pig, as he was clearly dominant in the competition. 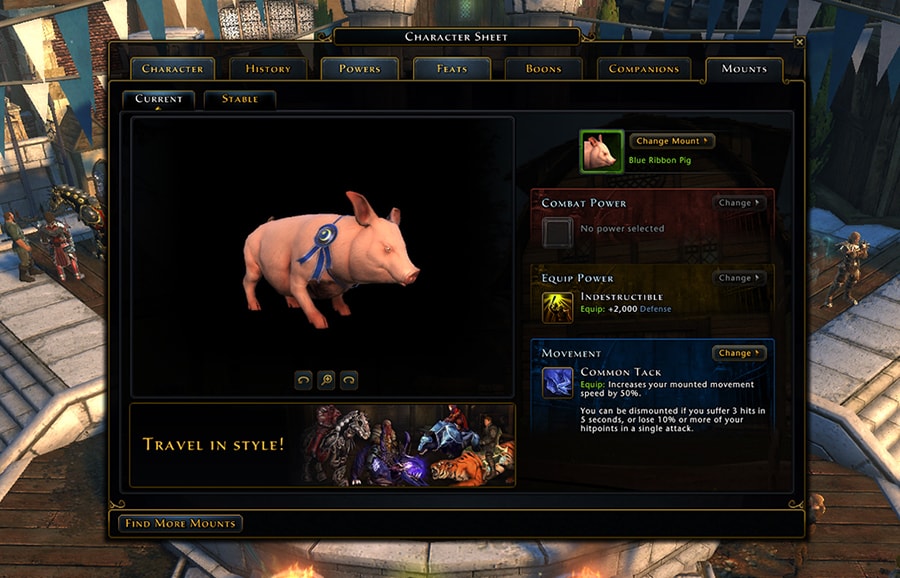 Afterwards, you might want to head on over to Brendon Canter in Protector’s Enclave, as Lord Neverember has decreed that he should make his Mounts available for any Adventurer to use. He can also give you the new Mount tutorial so you can hear about any other details you might have missed.

It’s been great chatting with you all about the upcoming changes to Mounts over the last several weeks. I look forward to each of you running around on your own super speedy Blue Ribbon Pig in the near future!