The ruined strongholds of Lurkwood have gained new owners. The tangled underbrush of the dark forest has been pulled away. Masons, carpenters, and artisans are laboring to restore crumbling structures to their former glory. Heroes from all corners of the Sword Coast have beaten back the orcs and cutthroats who terrorized the area for decades.

What does all this mean?  It won’t be long before some of your more ambitious neighbors become restless and cast covetous eyes toward your lands. It’s time to stockpile provisions, ready your swords, spell books, and holy symbols, and prepare to defend what’s yours.

Strongholds Siege PvP is coming to Neverwinter in a few short weeks. This new PvP game pits guilds versus guilds on a map shaped by the decisions and work of the guild members before battle. The battlefield is two Strongholds placed edge-to-edge along the central river. The structures and guild halls appearing on the map during a match are those the guilds built beforehand.

So, what can you do to make sure your Stronghold is ready for the coming storm?

You can’t fight a war without an army. Recruit some new blood into your guild and train with them. Stronghold Siege battles feature twenty players per side, so you will need some depth to your roster to field a full team.

Don’t worry if you can’t wrangle twenty guild members together at once, though. Smaller guild groups are combined into teams to fill out a match. The structures appearing on the map are determined by the guild that has the most members on a team.

Play some Domination matches. Playing gives practical small-group tactics experience and Glory. Glory can be spent at the Trade of Blades in Protector’s Enclave to purchase PvP gear, or you can donate it to the Coffer and build PvP structures in your Stronghold. 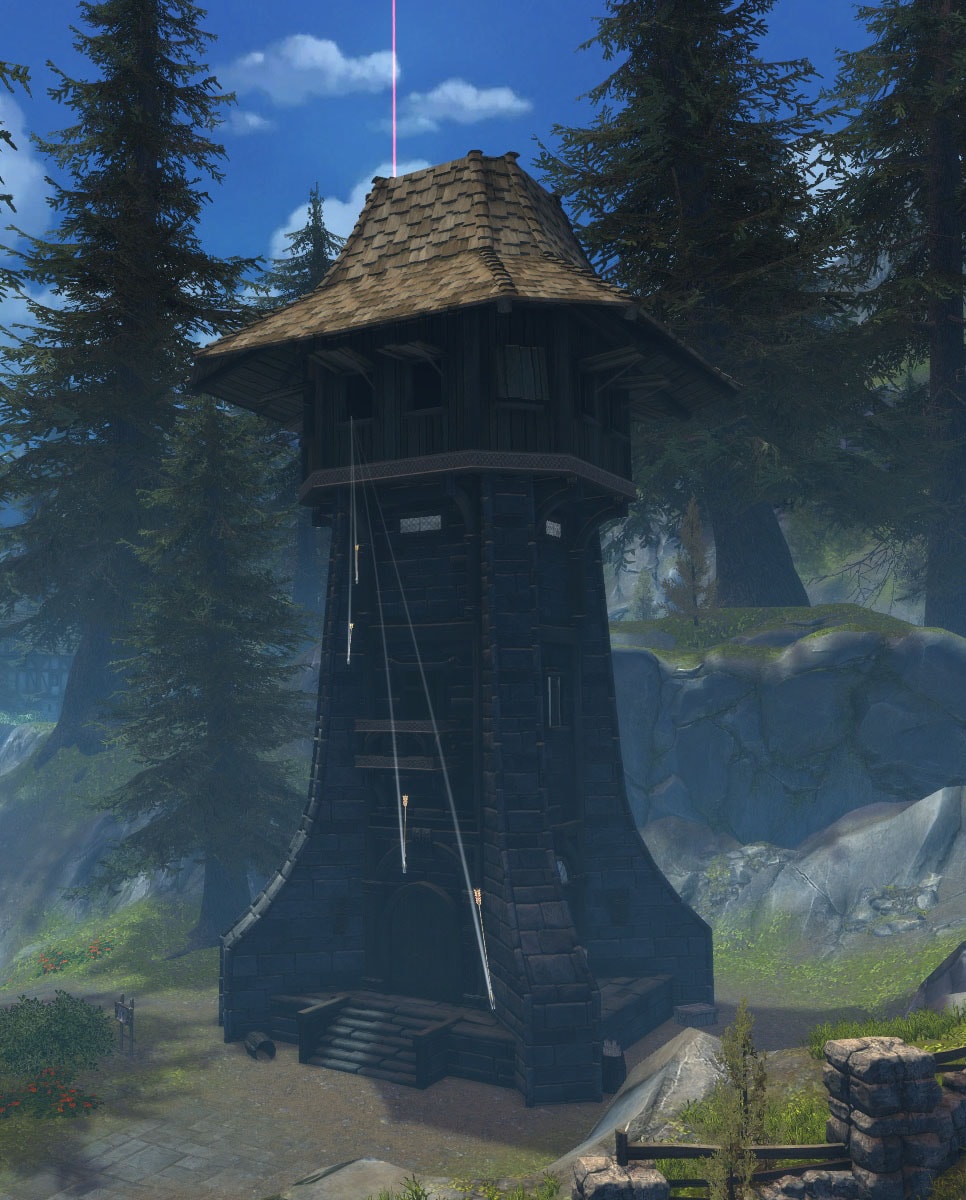 There are seven plots in the Stronghold for constructing defensive towers: two in the top lane, three in the center lane, and two in the bottom lane.  A tower by itself won’t stop the enemy from advancing down a lane (although a tower near a supply depot should deal with enemy siege engineers). The towers act as force multipliers, giving active defenders an advantage when defending a depot or clearing out an enemy siege point.

There are two tower types available when Stronghold launches: the Archer Tower and the Sorcerer’s Tower.

The Archer Tower fires rapid salvos of arrows and can engage as many as four targets at once. It also has a Harassing Fire ability that affects all enemies within range. Harassing Fire acts as a Snare, slowing enemy movement.

The Sorcerer’s Tower fires a large blast of arcane energy capable of hitting many enemies at once. In addition, it drains energy from enemies in its range, reducing the target’s Action Points over time.

Both towers do more damage as their ranks increase. Building the Siege Smith and the Siege Workshop improves your chances for victory. Each rank of the Siege Workshop structure increases the rate of fire of ballistae constructed during the match. Quick-firing ballistae hinder the enemy in constructing catapults and supplying the catapults with ammunition. Each rank of the Siege Smith increases the damage your team’s catapults inflict on the enemy Guild Hall with each shot. Both structures grant PvP boons at higher ranks. Rank up your other structures.

During a match, all non-tower structures in the battlefield (this includes the plots in Maiden’s Lane, West Dragon Hills, Homestead, and Stronghold Height) produce Supplies every five minutes. The Supplies are loaded on pack horses spawned at each location. The amount of Supplies carried by each horse is determined by the rank of the structure that spawned it. The more Supplies your team has access to, the more options you have, and the faster you can destroy the enemy Guild Hall.

The battle is almost here, so start building and get training! I’ll see you on the battlefield.