In this article we’ll take a closer look at the guild coffers. If you haven’t read Lifecycle of a Stronghold, read that first, as it gives an overview of the system and how the coffer is important.

The coffers are the guild’s central repository for all the materials needed to build and upgrade structures. There are three main categories of resources the stronghold needs, each of which can accept different contributions from players. A huge quantity of the items a player might collect while playing Neverwinter can be contributed to the guild coffers, such as enchantments, gear, campaign currencies and Astral Diamonds. 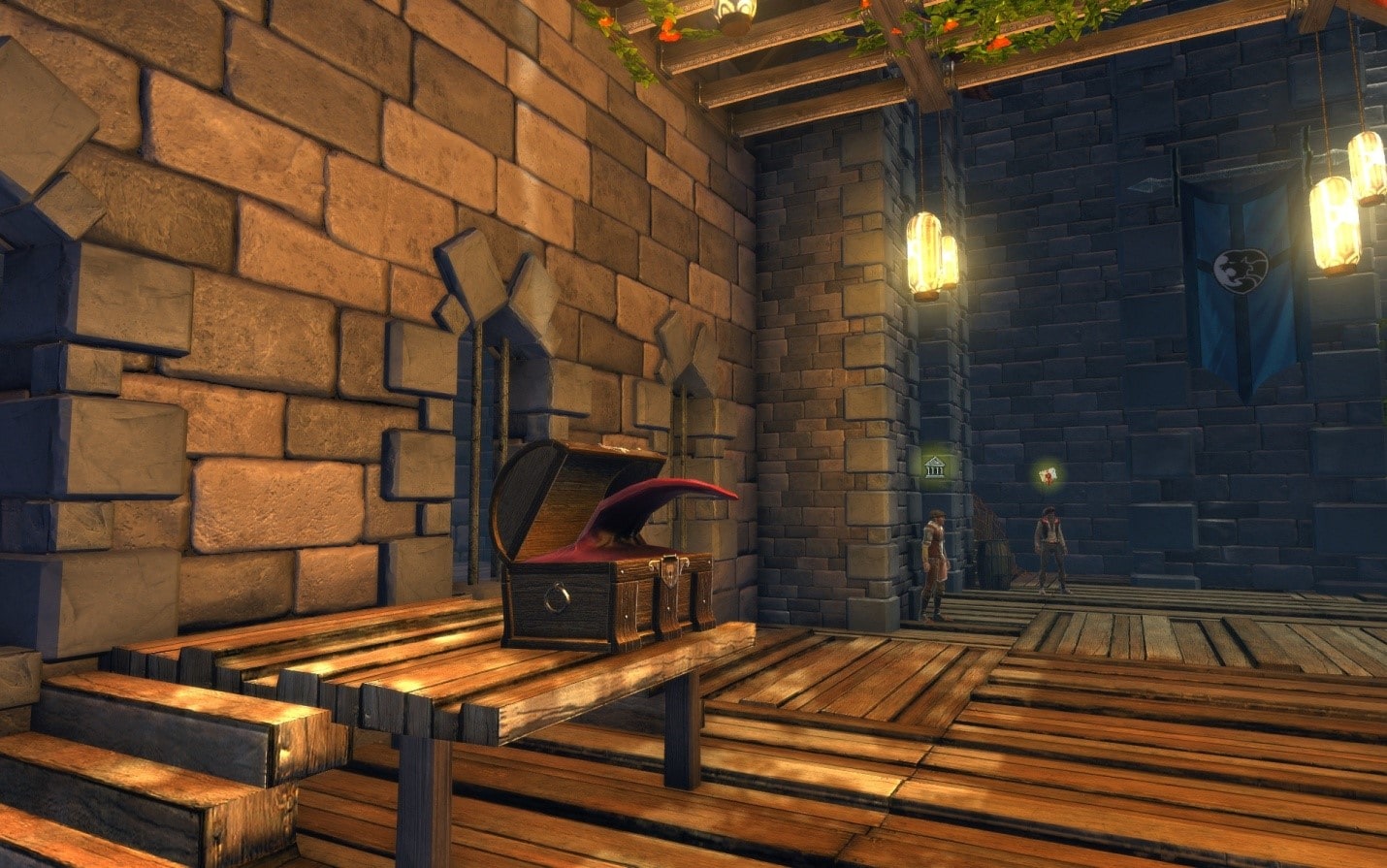 The first category, Resources, includes the base materials created by the guild’s production buildings, as well as a group of new items, called Shards of Power. These are earned as rewards from heroic encounters and for completing quests offered by stronghold NPCs.

The second category, Treasures, includes the various currencies earned by playing through Neverwinter’s four campaigns as well as four new items earned by completing quests granted by NPCs in some of the structures the guild can build.

The third category, Stockpile, includes gear, gems, gold and Astral Diamonds: all the things players accumulate while playing. This gives guild members an alternative to discarding unwanted gear or selling it for gold.

The guild coffers are located in the guild’s keep in a large stone building next to the guild hall. The guardian of the coffers is a large toothless mimic, who greedily accepts the guild members’ contributions. Interacting with the mimic opens the coffer window, which shows each of the resources the guild needs to build the structure they’re currently working towards as well as the items the player has available to donate.

From the coffer window, you simply choose the resource you want to donate to, which displays all the items in your inventory that can go into that resource. As you donate items, you are rewarded with Guild Marks in proportion to the value of the item you donated. So tossing a green item into the coffer would not earn you as many guild marks as a purple item would. All the items you donate are permanently transformed into the guild’s resources, so choose carefully.

Anyone in the guild can donate to the guild’s coffers and help the guild reach its goals, but only the guild leaders (or those granted permissions) can set those goals. Once the goal is reached, the guild leaders can travel out to the plot to be developed and start construction. Upgrades to the guild hall take a long time, while building and upgrading structures is considerably faster. As soon as construction is underway, the leaders can set a new target and the guild can start contributing to meet their new goal. 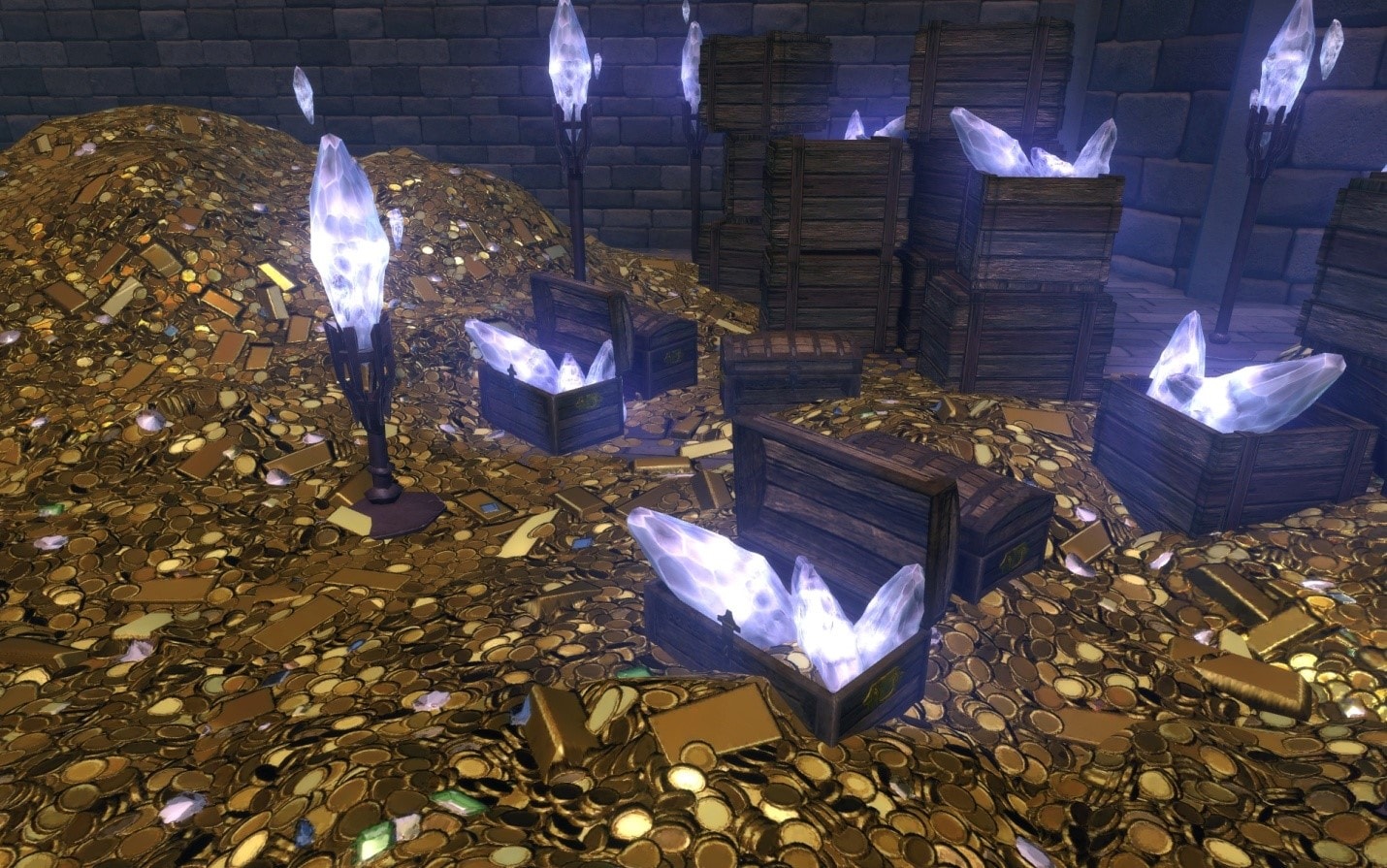 As the guild advances, the quantities of resources required to upgrade structures increases too. The coffers can hold a limited quantity of each and the guild hall needs to be upgraded to increase that capacity. The guild leaders will need to alternate between new structures and upgrading the guild hall to keep the stronghold progressing efficiently, while the guild members will need to direct their play towards the areas that grant the resources the guild needs next.

By working together and donating to the guild, members gain access to unique new gear and boons, and the guild’s stronghold grows bigger and stronger.

We’re all very excited to see how players interact with the coffer and Stronghold. Keep an eye out for more news on Strongholds and for details on when it will be hitting our Preview server!