I’m Jeff “LCDRMiller” Miller, an environment artist working on our big Stronghold update. I’m excited to give you a small glimpse into the making of the stronghold map itself and what it meant to combine PvP and PvE elements into one map… the biggest map we have ever made. You heard correctly, this is the biggest map we have ever made! There are two main reasons for the map being the size it is. The first being, we wanted players to feel a sense of exploration as they roam the lands and fight off enemies to expand their guild’s stronghold. The second reason was PvP integration, which I will talk about in a bit. Let’s start with PvE side of things.

Note: All images show work that is in development and not final. An early screenshot of the Stronghold map.

As with any new adventure zone in Neverwinter, no matter the size, we start with the initial block out of terrain and first pass propping. This helps get in an early feel for size and gameplay room. At this point content design can go in and start to do their initial gameplay pass. The image above is a screen shot taken during that initial phase.

Once gameplay has been roughed in, the environment team can begin finalizing the map. This means sculpting terrain into its final forms with mountains ranges and roads as well as working with design to come up with unique, lore driven areas in the land surrounding your guild Stronghold.

Since this is a huge map, we as a team decided it would be best to set it in an area that allowed the art team to use props we already had in game. This choice enabled the environment team to hand craft a new stronghold village kit and create all new structures that players will be able to build throughout the map with your guild mates, as well as new Stronghold castle art.

The Stronghold map needed to have enough room for guilds to build structures around the map along with PvE adventure zone type gameplay. This meant making very distinct areas that felt different and played into the back story and lore of the surrounding land and Stronghold itself. Devil’s Hideaway, one of the many neighborhoods within the Stronghold.

We also wanted to take into account future stronghold expansions later on down the road, so while you’re adventuring you may come across closed gates into areas too dangerous at the moment for your guild to explore into. 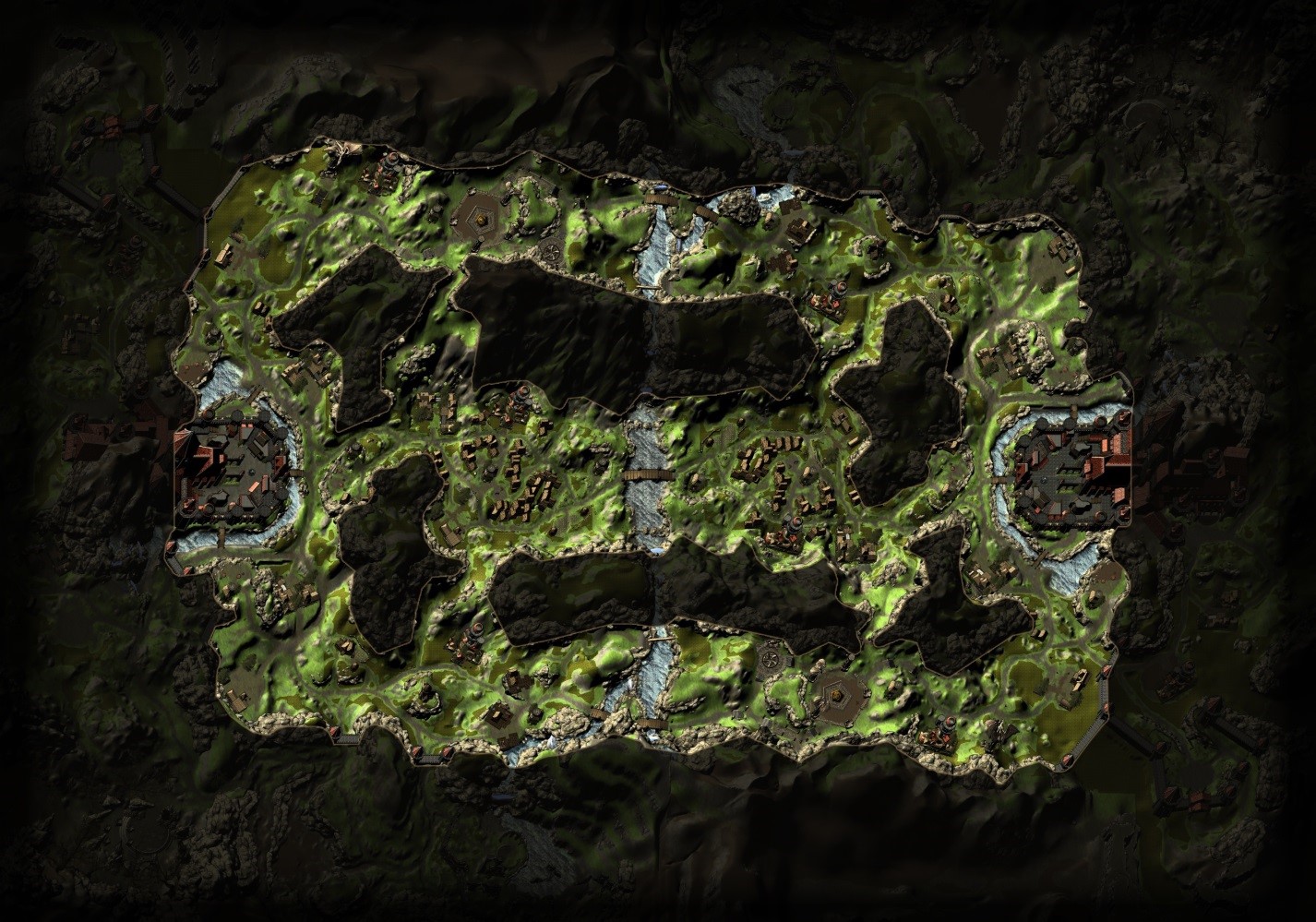 Our PvP map - the combination of two guild maps!

One of the main features of Stronghold is guild pvp, and our goal was to have guilds fight on each other’s lands in large-scale combat. To do this, we had to find a way to bring all of your guild’s structures into another guild’s map and give the true feeling of “Our Guild Vs. Your Guild”. To accomplish this, we rotated a mirror image of the map across the river. The image below shows off our import export method to create the opposing side. Here is a screen shot of one of the terrain Height maps as well as a material map for the stone roads. It’s been a huge challenge met with great pleasure to create the Neverwinter Stronghold experience. Adventure awaits in every nook and cranny of this map. PvE fans as well as PvP fans will find a great home in their very own piece of Faerûn