We recently sat down with John Hopler, Content Designer for Neverwinter, to discuss the new and exciting Heroic Encounters coming with Tyranny of Dragons. He gave us some insight on Heroic Encounters and what we can expect from Module 4. If you missed our twitch Livestream you can check it out here. For those who are unable to watch the Livestream, we've transcribed the answers for you. Enjoy!

Brief summary of Heroic Encounters in Tyranny of Dragons:

The Heroic Encounters in Tyranny of Dragons will be slightly different than from what players saw the first time we introduced them in Module 3. This time around players will be able to participate in Heroic Encounters starting at level 26. As players continue to level, more Heroic Encounters will appear. Each encounter features a battle against Dragons: Charthraxis in Neverdeath, Vartilingorix in Ebon Downs, Merothrax in Icespire Peak, Venfithar in Rothe Valley, and Vilithrax in Whispering Caverns. Additionally players can expect many rewards from completing the encounter including some unique rewards from some of the more difficult encounters. For more on Heroic Encounters check out the Q&A below:

Can you tell us a little bit about the new campaign coming with Tyranny of Dragons?

The Tryanny of Dragons campaign is the first campaign where people begin while they are still leveling up for the game. Players can begin that campaign at level 26 when you’re going through Neverdeath. It reveals, over time as you’re leveling up, the story behind the Tyranny of Dragons and what the new sect of the Cult of the Dragon is up to. Not to give too many spoilers away, but Severin has convinced some of the Cult to work with live dragons rather than just dracoliches. This is why you’ll see a lot more live dragons in your adventures. 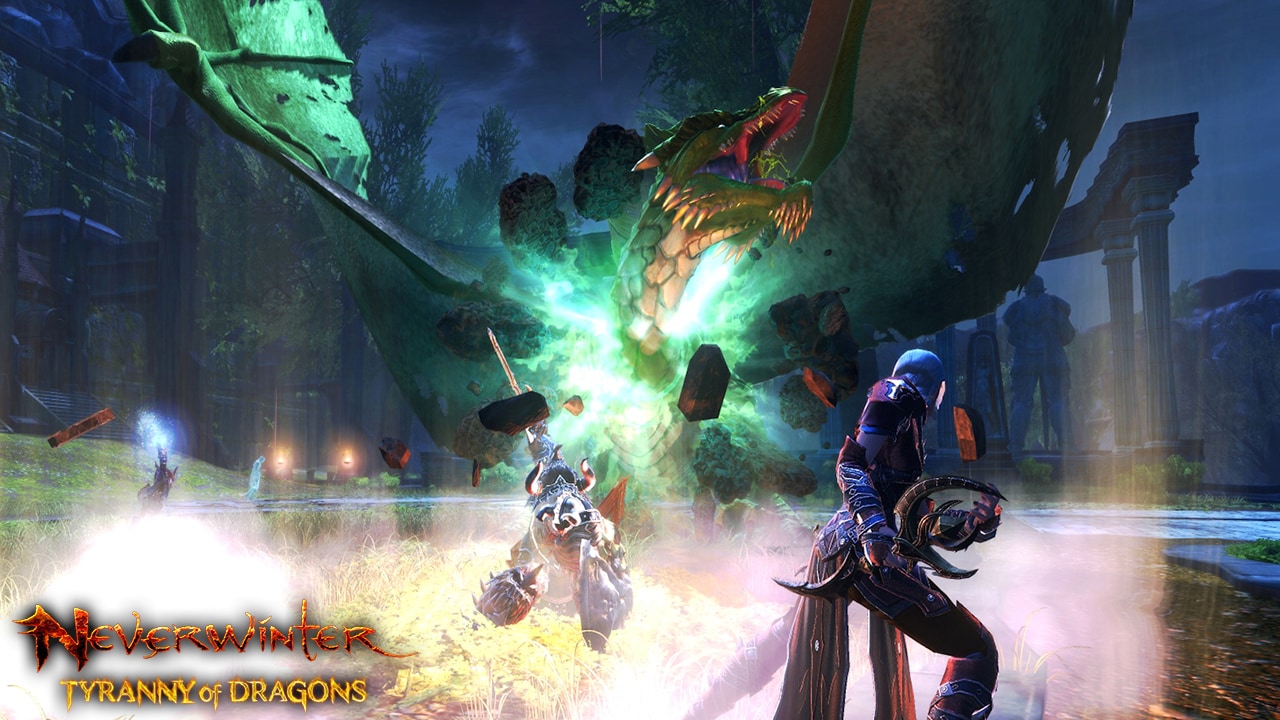 The new Heroic Encounters are all scaled content. Awesome! Would the developers be willing to expand this scaled content into other aspects of the game such as Foundry Missions or even to the Open World Zones themselves?

We have discussed it. We really liked the scaling content because it allows us to get as many people involved as possible. Unfortunately, there are a lot of technical issues surrounding expanding this to all adventure zones, especially when it comes to rewards. As a result, we have no concrete plans to do this at this time.

What was the hardest part about designing these heroic encounters?

The most difficult part was that we wanted to revisit existing areas in the game, but we needed to have it make sense. We also wanted to match the dragons to their environment as best we could. We had quite a few story meetings about it, actually!

How, exactly, will the HEs fit into progression through the Module 4 campaign? Will issues where a zone is less populated be a factor in whether someone can progress through the campaign, (i.e. they can't get a group to complete a Heroic Encounter)?

The heroic encounters are just a portion of your advancement. You’ll definitely want the tokens they give. As you unlock additional areas, you can return to areas you’ve visited previously to get the campaign rewards. There are also other quests that are not dependent on an area’s population that are the primary drivers of the campaign. We didn’t want low server populations to be gating players’ progress. Will the scoring for these Heroic Encounters be visible during and after the HE is active?

We’ve talked about it, but we see Heroic Encounters as cooperative group content rather than competitive like some of the other events we’ve run. I suppose if there’s enough demand for it, we could reconsider. Right now, however, the “scoring” and rewards are mainly to encourage participation.

Will scoring take into account not only damage dealt, but also healing done, buffing/debuffing, damage taken, and total time one is actually involved in the Heroic Encounter, (i.e. whether you were there for the entire duration, or just came in late and hit a mob once)?

Right now, HEs will score damage done, damage taken, and healing done to others. Buffing/Debuffing is pretty hard to track and assign a numeric value to, so we’re unable to take that into account. We are, however, working to make sure that the healers and tanks have a chance to get the top prizes.

Will the Heroic Encounters be instance-specific and/or will instance-switching still be allowed?

The Heroic Encounters will be instance-specific and will start at different times. We will allow instance hopping as well. Could you implement a countdown timer that displays the time until a Heroic Encounter starts?

We actually do have a countdown timer for our new Heroic Encounters. Unlike in Icewind Dale, where there is a lot of high-level loot attached to the encounter, the new heroic encounters are geared toward campaign progression. We felt that attaching a timer to the new Heroic Encounters, would aid players in progressing through the campaign more easily.

We'd like to thank John for taking the time to join us for the Livestream and answering some questions from the community. We can't wait for everyone to check out the Heroic Encounters coming with Tyranny of Dragons and hope you'll all be logging in when it is released next week on August 14. Until then check out all of our previous Module 4: Tyranny of Dragons coverage and be sure to keep an eye out for more M4 related news!