Streamline Leveling – Get players to our newest and best content faster. Balance the progression and rewards. Make each level achieved feel rewarding.

Teach the Game – Reimagine how the game is taught. Build a linear flow that ensures players are shown important systems.

The big change with Module 21 is an alignment to Dungeons & Dragons with an adjusted level cap of 20. As you play through the new leveling flow, you achieve new levels at key milestones in the stories of each zone. This means we could better message new power unlocks in the quest rewards, and ensure a proper pace and challenge as you work through each zone. No longer will players out-level a story just because they did some side-quests, or a few queues. This does not mean that leveling slowed down though. The time to reach level 20 is on average around twelve hours, compared to a much longer and more volatile time to reach the cap on Live. We think players will enjoy being able to unlock new powers faster, make their choice of Paragon Path sooner, and see all that Neverwinter has to offer!

To achieve this reduction in time and focus the new leveling experience, we have removed some zones from the original leveling flow. We know this is an important topic for many of our dedicated players so we are going to go into detail on these decisions here.

The zones we vaulted are:

We did not make this decision lightly and we know there are players out there that enjoyed each of these spaces. First and foremost, we want to make it clear that vaulting in this case is not the same as removal. We have removed content in the past, and we do listen to the concerns about content like old dungeons that have been lost. We have made some past efforts with features like Tales of Old to bring back this lost content. With the new M21 leveling flow, the Throne of Idris was brought back to properly end the story of Ebon Downs. But those are targeted cases, and with vaulting we have a more discrete plan to bring this content back. With the new Adventure system, which we will discuss more in an upcoming post, we will be able to revisit these zones and their stories with updated flow, rewards, and visual polish.

To go further, here are the specific reasons that led to our final decision for which zones to vault:

Blacklake District and Tower District – According to our data, these zones had a lower amount of play time among our players. Even though some revisions were made to improve them in past modules, they were still low-traffic areas. Shifting to more popular zones in the new leveling flow keeps players focused on our more engaging content. Re-introducing Blacklake and Tower District as Epic Adventures at some point will involve some revisions to the maps and content flow.

Blackdagger Ruins and Helm’s Hold – These were strong zones but the primary reason for their removal was their heavy reuse in the Elemental Evil Adventure. Elemental Evil is one of the next natural steps in the new leveling flow once you have moved onto post-level 20 content, so we wanted to avoid that direct repetition. These are high on the list for returning to the game as Epic Adventures next.

Pirate’s Skyhold, Rothe Valley, and Mount Hotenow – These were zones where we wanted to invest more time in improving quest flow and polishing visuals, but the cost would be higher than in the zones that we chose to keep. This does not mean these zones won’t come back. But it does mean their return may take a little longer than others.

Overall, we are confident that we are moving the game in a positive direction, but are absolutely listening to player concerns. Module 21 is a new beginning, and we will keep working to improve the game we all love. 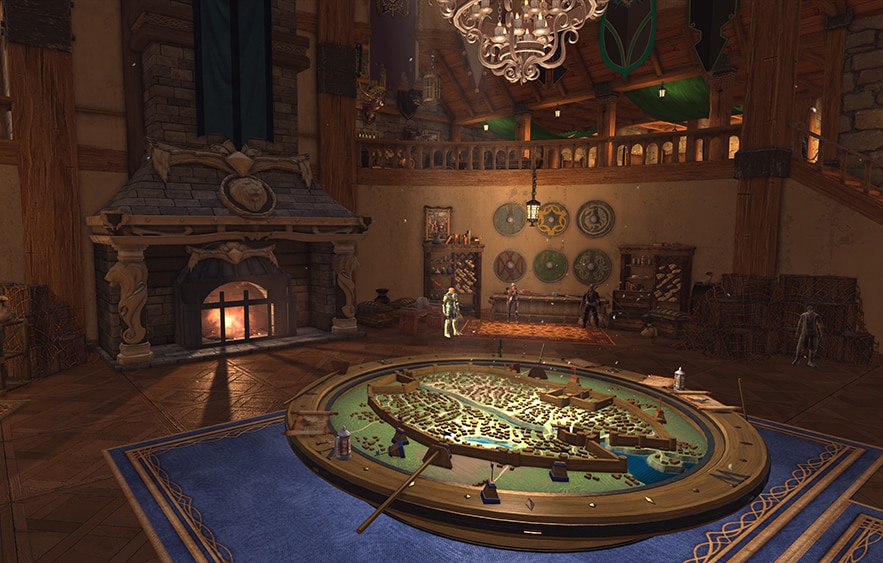 With our new leveling flow, we needed a place for all the greatest adventurers to meet, train, and claim their hard-earned rewards. This building is a new addition to Protector’s Enclave and will serve as a hub for leveling adventurer’s in their efforts to help the Sword Coast. The old Trade of Blades has been remodeled to serve more than just PvP. Many useful vendors have moved in to provide a variety of services, and Sergeant Knox guides all new adventurers from within the main hall. There are side rooms fitted for the needs of all kinds of adventurers. Clerics will find respite in the chapel, Wizards can peruse the mystical arts in the library, and Fighters can share stories around a roasting boar in trophy room. If you have an interest in tales from the past, the Acolytes of History have set up in the archives on the second floor, who offer lore from Neverwinter’s past. Keep an eye out for acolytes out in the field to hear more tales and perhaps help achieve things thought lost… 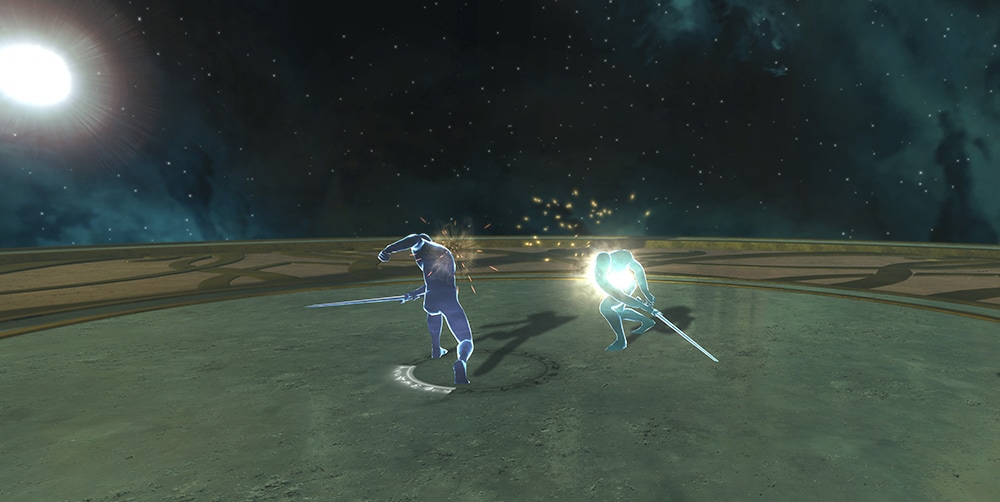 The wizards of the Adventurer’s Guild have created a special demiplane for adventurers to safely practice techniques and test their mettle. Players practice combat basics like Combat Advantage and Tab Mechanics here. After joining the Adventurer’s Guild, players will be able to access the Training Room with its testing functionality enabled. This will provide our dedicated build-makers and testers with a place to explore the combat systems with convenient features like no cooldowns or infinite Action Points. This is a feature we will be expanding over time as players provide suggestions on all the kinds of functionality they would like to see! 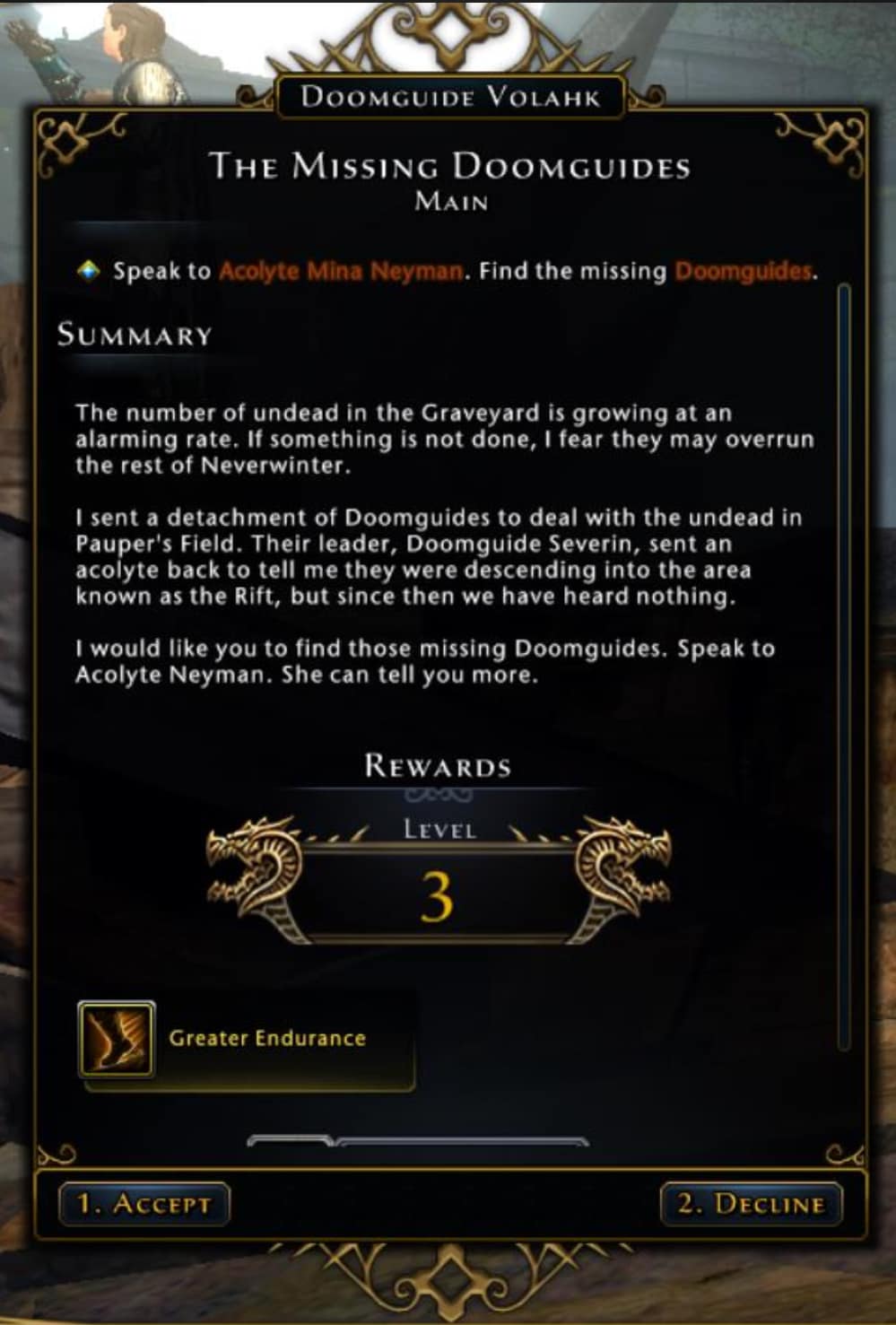 As part of our efforts to teach Neverwinter to new players we have updated the systems we use to explain how the game actually works. One of our major changes is we now have new visuals for important Main missions. They have an updated overhead icon as well as new treatments in the journal and quest tracker. We wanted to make it clear as you move through the game which content is required versus optional. We also built new visuals for Event missions to distinguish this special limited time content from regular questing.

We have done away with one of our older tutorial styles in favor of a new evergreen button in various windows that will open a useful window explaining features of Neverwinter. This will be a useful reference as you learn a system, and can be referred to at any time after for a refresher on the mechanics.

Because of the major changes to the leveling flow and level cap, existing characters are going to be set to level 20 and offered a free gear pack to get them in the right place to start on epic content. The leveling Adventures will still be available to play and we encourage everyone to play through the new tutorial missions and claim the Adventure rewards. Any characters who were last in vaulted zones will be warped to Protector’s Enclave and Sergeant Knox will offer a quest to meet with the Reward Claim Agent for the gear pack. We are also making our best effort to build exchanges for the variety of items and currencies that are no longer relevant after these changes. We understand this can be a disruptive change for our leveling players so we will do all we can to make this a smooth transition.

The best way to understand these changes is to jump onto the Preview server and try them out.

We want your feedback and we are looking to make improvements to make sure this is a positive change for the game. And of course we’re looking for any issues so we can fix them before M21 goes live. Please use our official threads in the Preview Forums to report your feedback!

Thank you all for playing Neverwinter!