Next week's PC update will feature a new type of content, a special limited time campaign- Avernus: The Redeemed Citadel. Zariel, newly redeemed and free from Asmodeus' bondage seeks to redress the balance of her dark deeds. In pursuit of this goal she would see the Bleeding Citadel restored to its former glory—to once again serve as a bastion of angelic strength in the Nine Hells. But not all of Mount Celestia is of like mind in responding to Zariel's overtures. It will be up to mortals like you to assist Zariel and her adherents in the reconstruction!

In this special campaign there will be no weekly hauls or campaign tasks, instead the entire server will work together to reach four major milestones and reforge the citadel. By completing newly available missions in the citadel or participating in other activities which advance the angels' cause; such as slaying devils and demons on the surface of Avernus, you will both advance the progress of the citadel's restoration and earn Zariel's favor, which can be redeemed for various rewards. 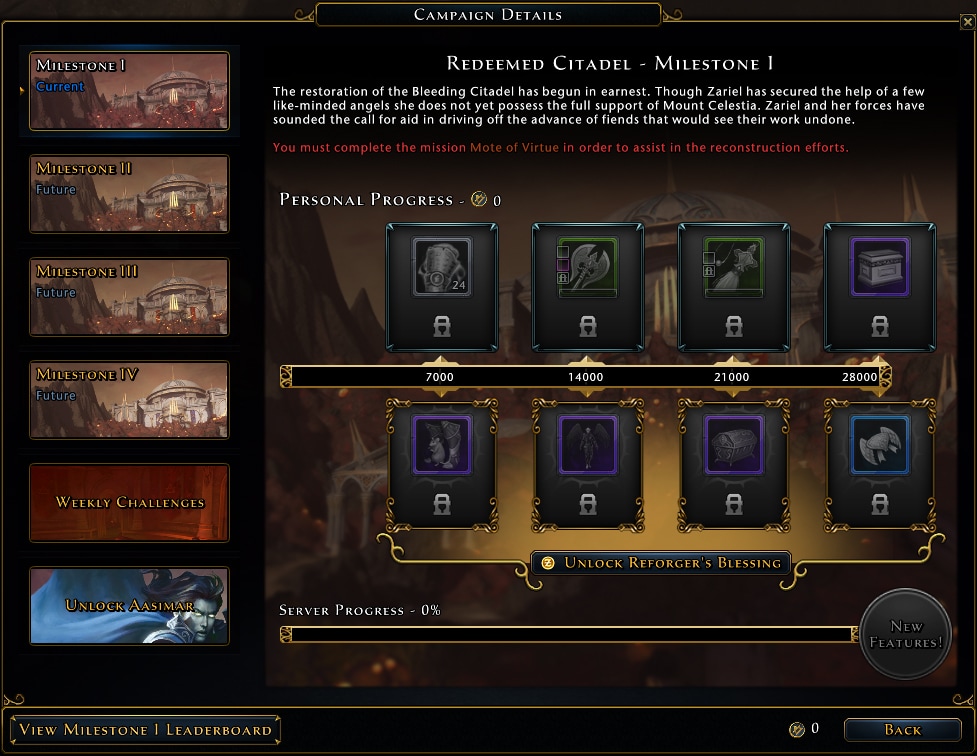 In place of the standard campaign interface you will find a display of your Zariel's favor earnings as well as the server's overall progress for each milestone. Your personal progress will unlock various rewards that may be claimed on this screen, beyond what you may purchase with Zariel's favor at the citadel.

When the server completes a milestone together, the citadel will undergo changes in real time, without an update or maintenance. In addition to visual changes to the citadel itself, new content will become available as well as new rewards to purchase with Zariel's favor. The 100 players who earned the highest amount of favor while the milestone was active will earn a brand new item, a version of a new item that will be available in the zen market once the milestone is complete, but with an entirely unique, alternate visual.

If a milestone is completed by the server early, there will be some time—a few days or weeks—before the next milestone begins. During this time you may continue to earn and spend Zariel's favor, as well as work towards your personal goals. Once the next milestone begins, the previous milestone will end and no more personal progress may be earned. So be sure to work hard during each milestone so you don't miss out on any personal rewards—including a chest of 100,000 refined astral diamonds for the first character on your account!

If you're not sure you'll be able to complete the goals in time: a reforger's blessing will be available in the zen market that allows the bearer to earn personal progress at their own pace, even after a milestone ends. This account wide purchase also unlocks additional personal rewards including the new premium aasimar playable race which will unlock for those who purchase all four blessings and claim the personal rewards for all four milestones.

Though the fourth milestone is a ways away a special discounted bundle containing all four blessings will be available at launch for those who are interested in the aasimar race. Blessed with the power of Mount Celestia, aasimar take the form of humans with luminous eyes and access to bright distinctive hair colors and skin colors, in addition to standard human options. We're very excited to bring this distinct Dungeons & Dragons race to life in Neverwinter!

This exciting new limited time campaign will only run once, culminating in the full restoration of the citadel! Be sure to participate as each milestone becomes available over the next few months. Once the next module releases, the Redeemed Citadel will disappear from the Sword Coast Chronicles for those who have not participated. Those who have will always be able to review their past participation or claim any unclaimed rewards. And of course, those who purchased a blessing may earn personal progress whensoever they choose. Note; however, that blessings may only be purchased before the associated milestone ends!

We hope you are as excited about The Redeemed Citadel as we are to announce it! Until next time—see you in Avernus adventurers!