Welcome to the new Appearance System!

For a while we’ve thought that the existing transmutation and dye system could be better. We’re very happy to include the new Appearance system in M17. Here’s a brief summary of the changes, but I encourage you to try it for yourself.

The big change is that equipment’s appearance and colour is now defined per slot instead of per item.  In the old system, you destroyed Item A and up to three dye items to change the appearance and colour of item B. But when you outgrew Item B, or just wanted to equip something else, you had to repeat the process and use up more items to give the new thing the same look. And dyeing all your stuff red took a lot of dye!

Now, you define how an equipment slot looks, and your equipment takes on that look. If you have an appearance override defined for a slot, anything you put into that slot will take on that appearance automatically without you having to do anything. No matter what you’re actually wearing on your head, it can look like a bright pink fedora! (Fedoras not available in all regions. Some restrictions apply.)

Your gear and fashion appearance slots are all in this tab now. Any changes you make in this tab will not be visible in the world until you save them (if you just want to switch between your gear and your fashion look, your in-world appearance won’t change until you choose the “Wear Gear” or “Wear Fashion” button). Other players won’t see you until you’re ready to be seen!

If you have no appearance overrides defined, the appearance slot will show your equipped gear since that’s what’s controlling your appearance:

You can change the appearance colours by using the three palette buttons beside the item icon. That lets you set the primary, secondary and accent colours for the item. You get seven base colours to choose from right away. Other colours need to be unlocked (we’ll get to that in a bit). Your chosen colours will be displayed beside the item, and your Appearance paperdoll will show the change. Remember that your in-world appearance will not change until you save!

We’ve changed the colours of the equipped item, but of course we can also change its whole look.  Unlike colours, though, you don’t have any alternate appearances right at the start.  You will create your own library of only the looks that appeal to you, by converting inventory items into Appearance Library items. 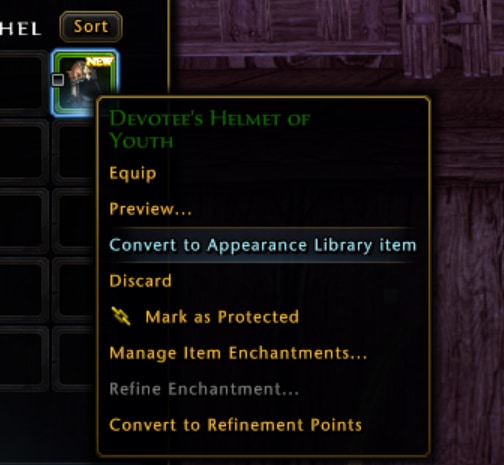 Dye items (bottles and packs) work in a similar way to equippable items. Converting dye items unlocks Colour Library choices (dye packs will unlock multiple Colour Library choices). Once choices are unlocked, they’re available for you to use as often as you want in as many slots as you want. You only need to convert one dye bottle to be able to dye every item you’re wearing red.

Returning to appearance changes, though, once you’ve converted an item from your inventory into an Appearance Library item, its ready to use. Click on the “Change Appearance Item” option from the slot’s context menu.

This will display the Appearance Library choices for that slot. Choose the one you like! Single-clicking will preview the item on the Appearance paperdoll, double-clicking (or clicking the “Select” button) will choose it. There is a cost to use some appearance items, but that cost won’t be charged until you actually save your changes. And remember that your in-world appearance won’t change either until you save, so feel free to experiment with your look! If a slot’s appearance is being overridden, its background changes to a brighter colour and the item icon is completely opaque.

And that’s the basics! Remember that nothing will change in the world until your changes are saved, by using the “Save and Wear” footer button

And remember that while you can toggle the Appearance paperdoll between gear and fashion to test out looks, to actually change your in-world appearance you have to use the “Wear Gear/Fashion” footer button. 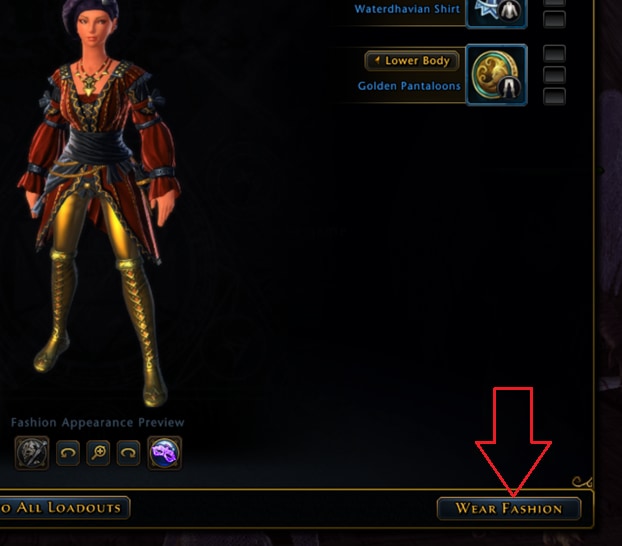 Thanks for hanging in there all the way to this point! Here are some clarifications of some details that came up in the preview forums and playtests.

Thanks for your attention, and enjoy the new Appearance system!