Greetings adventurers, Asterdahl here today to talk to you about some of the new enemies you’ll be facing off against in the upcoming Tomb of Annihilation release. For those of you who have not already had the chance, check out my earlier blog Stronger Enemies, Stronger Equipment for details on the increased strength of enemies in new areas.

Let’s jump right in! First I’d like to talk about the general enemies in Chult. A failed undead siege on Port Nyanzaru has left the surrounding jungle littered with an army of aimless undead. In addition to a number of returning undead enemies, Module 12 brings with it the addition of new types including powerful necromancers that can resurrect their minions and paralyze their enemies.

Paralyze—or more accurately, partial paralysis—is a new status effect certain enemies will be able to inflict. Regardless of the source the effect is the same: for the duration, there is a periodic chance you will be stunned. Specifically, every three seconds there is a chance you will be stunned for 1 second. As opposed to being outright disabled for a short time, this effect can last a good while, interrupting your actions unpredictably. You’ll want to avoid attacks that apply the effect.

In addition to partial paralysis, enemies like the fierce, snakelike race of yuan-ti will make use of new mechanics like fear and returning mechanics like gaze which first appeared in The Cloaked Ascendancy module. Fear is a new status effect which causes the player to lose control of their character temporarily, forcing them to run away in terror. Gaze refers to powers which will fail to take effect if you look away from their source. The floating eye indicator some of you may recognize from the Nostura fight will be reprising its role as our standard gaze indicator. 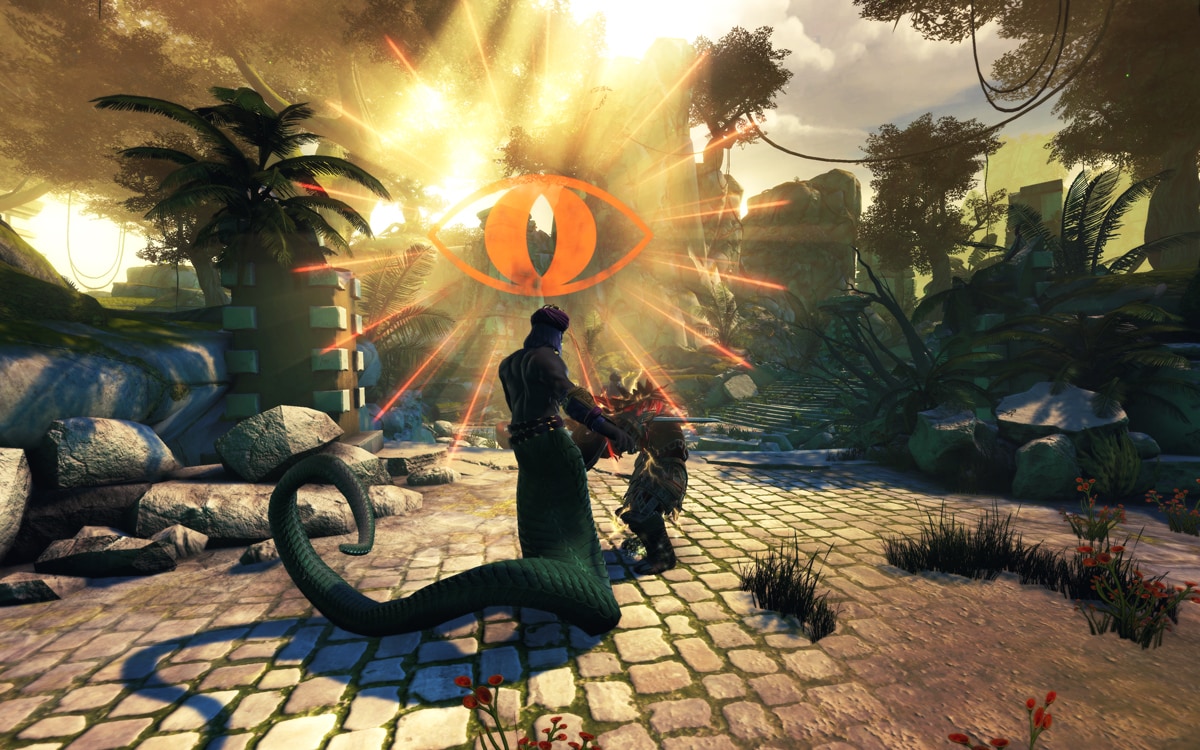 Of course, I can’t talk about the enemies in Chult without mentioning rare monsters and hunt marks. I won’t go into all the details but suffice it to say Chult is the home of many exotic beasts that will be sure to provide exciting new challenges.

Speaking of exotic creatures—Dinosaurs! The land of Chult is rife with the huge scaly beasts and they provide an aggressive, ever-present sense of danger to the lands of Chult. An array of various raptors hunt in packs, stalking and pursuing their prey from great distances at for great lengths. You’ll need to watch your step like never before. As if the threat of being ambushed by a pack of raptors wasn’t enough, the mighty allosaur, the larger tyrannosaur and the even mightier tyrannosaurus rex roam the interior in search of hapless victims. Thanks to their huge size, tyrannosaurs are always on the lookout for a meal and will even feed on other monsters. The great size and strength of these beasts, however, comes at a cost. They, along with a handful of other large hunt marks, may be toppled. This mechanic, new to Module 12, allows adventurers to knock over large enemies, allowing for a temporary chance to exploit their defences. Depending on the monsters, striking them from different sides will be more effective at knocking them off balance.

We hope that the new topple mechanic will help give these iconic giants a sense of scale and add a level of dynamism to the encounter that will feel decidedly new and fresh. Both I and the rest of the team have put a lot of work into making sure that the tyrannosaurids feel like nothing you’ve ever faced before in Neverwinter. Each tyrannosaur features dynamic powers with lots of movement which should serve to keep every encounter interesting. Unlike standard enemies who essentially use their powers on cooldown, or contemporary bosses who generally have a set rotation; the tyrannosaur is constantly evaluating her move set against the situation, often times moving into position to setup a powerful attack. That’s not to say there is no mastery to be had, quite the contrary, once you’ve carefully studied their behaviors, you should be much more confident facing off against these dangerous beasts.

Mastery was a core concept when I worked on designing the tyrannosaurid family. I worked hand-in-hand with our animator—Ben Norcross—to make sure every power had a unique animation tell that really sells the forthcoming attack. None of the powers will feature area of effect indicators, so keep your eyes on your opponent.

That’s a wrap for today’s blog, I hope you are all looking forward to facing off against new and deadly foes! See you in Chult!