Hello I’m Ryan; I was the primary artist working on the Soshenstar River zone. Creating the jungles of Chult was really fun and exciting for the team. This was the first time in a long while where the art team had to make a completely new location. We started by reading really early drafts of the Tomb of Annihilation provided by Wizards of the Coast. It was really fun and creative to read through it and turn text descriptions into ideation concepts. The art team did a bit of exploration into what the jungles of Chult could look like from color pallets, plants, trees, and motifs. 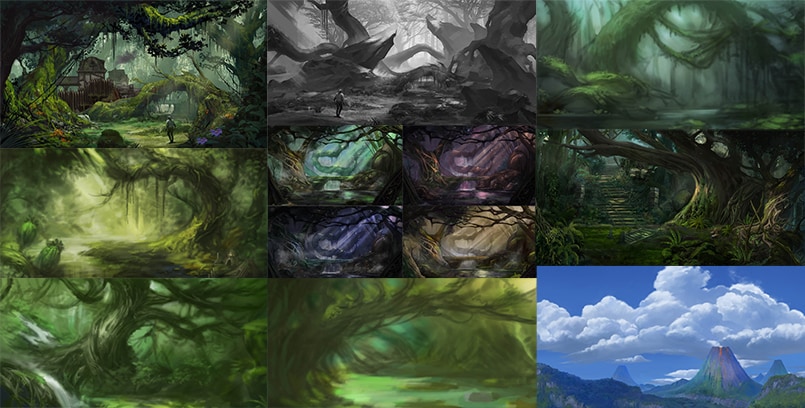 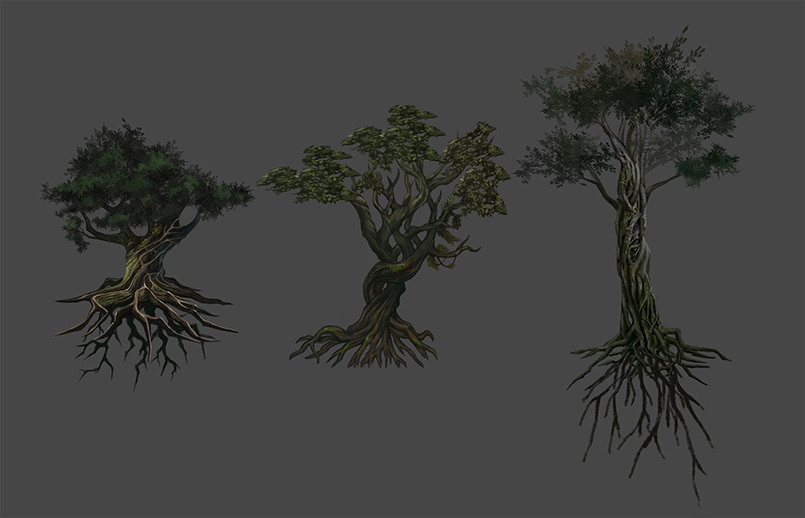 During this time the art team also does a proof of concept, cobbling together a jungle with existing older assets in engine. This helps us explore the types of assets and motifs we will need. 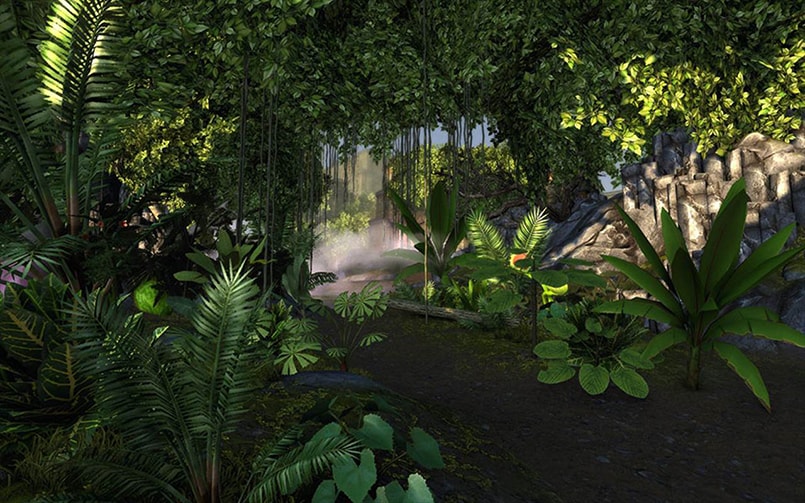 While the art team ideates on the look and feel of the zone, the design team starts on the story and layout of the zone.  The art team works with design in grayboxing the zone getting the size, spacing, and layout figured out. In this phase we block out big art assets and put some placeholder art from existing assets. Here are some early shots of the zone in the graybox phase. 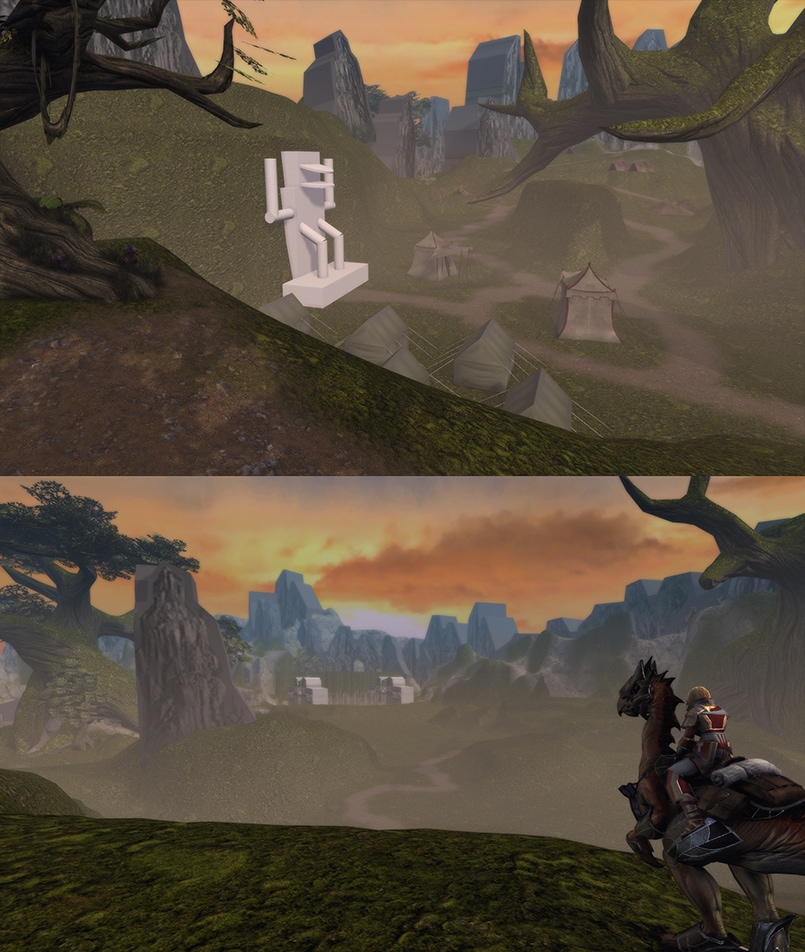 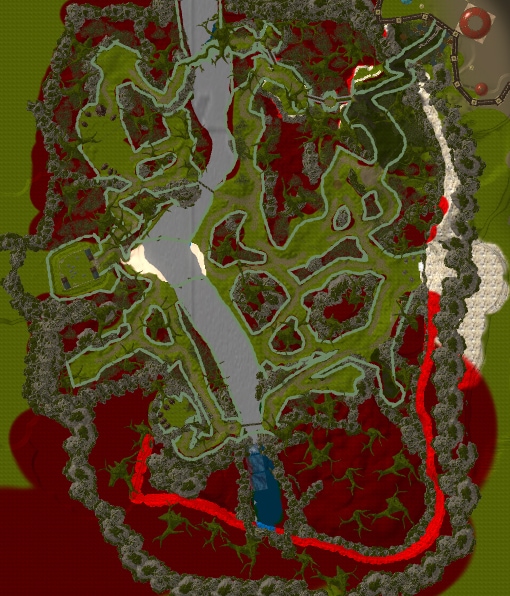 From this point on the art team creates the assets we initially created concept for; Also creating several variations of the many natural foliage assets. Earlier in the graybox phase we used older terrain textures that best fit what we think the zone would need. We also make a couple new terrain textures to give a unique look to the zone. Generally our tools of choice are 3D Max, Zbrush, Substance Painter, and Substance Designer. We’ll usually start with a high poly sculpt and then make a low poly version to bake down the details. From there we use Substance Painter or Substance Designer to create textures. 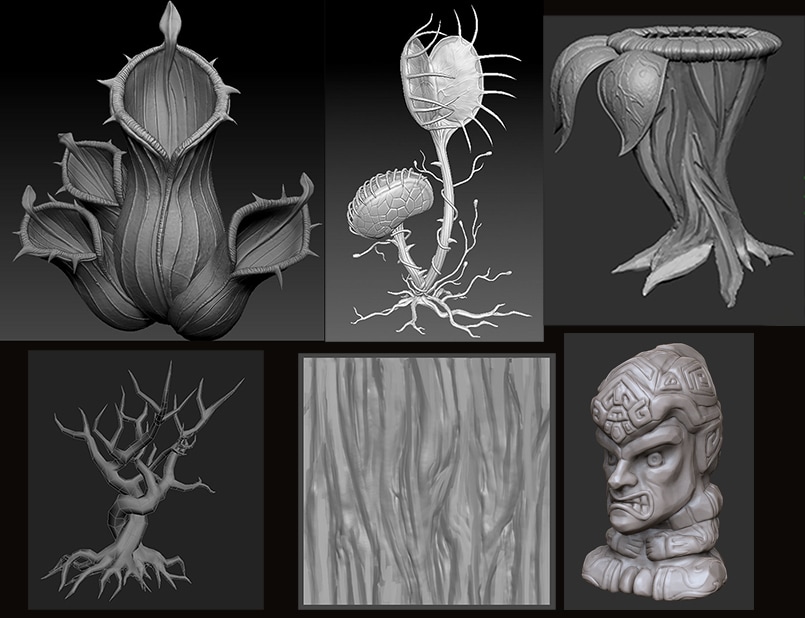 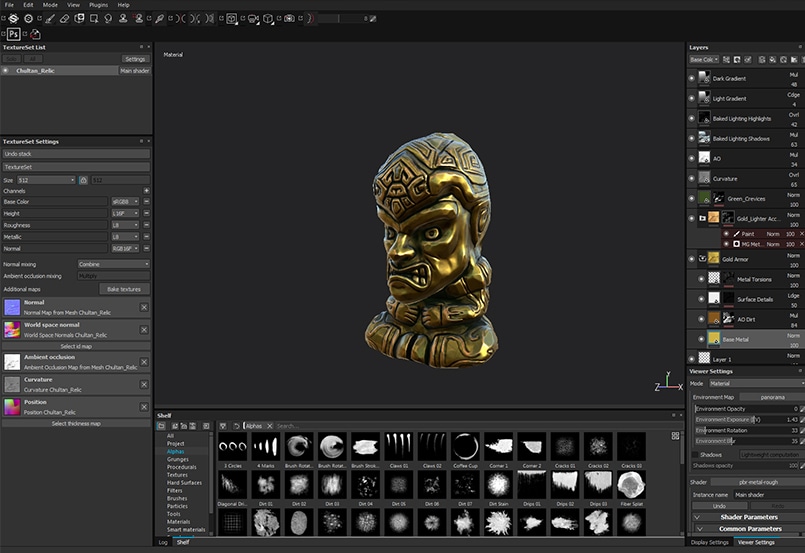 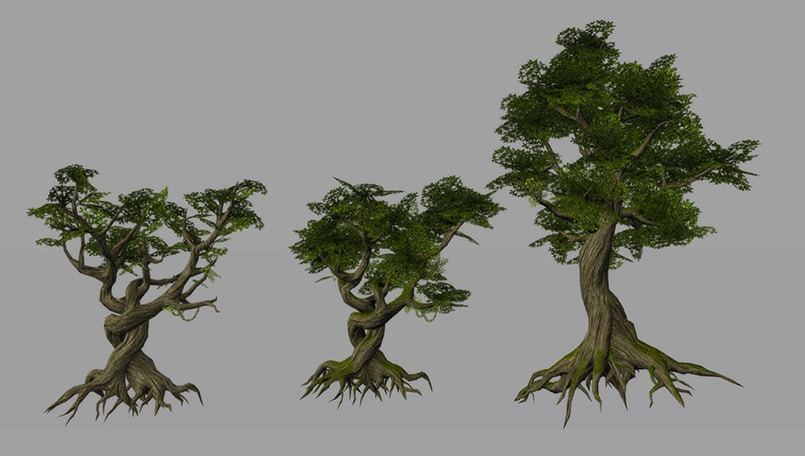 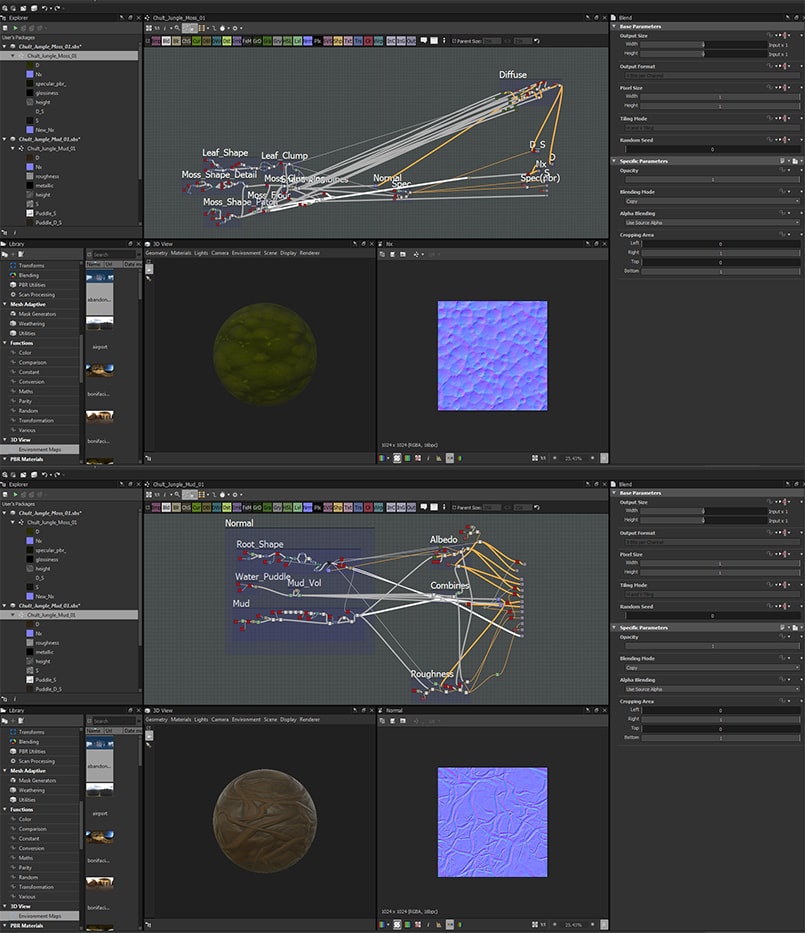 Now that the art team has a good amount of assets made we focus on the world building of the zone. For me personally this is like going into Bob Ross mode digitally painting happy trees and plants. I really wanted to create an environment that had its own unique identity and motifs. A lot of thought was given to how trees and foliage were laid out. From the juxtaposition of small foliage around large foliage, to the silhouette of a clump of assets and the leading lines they create. Here is a time lapse of world building a small section of jungle. This video was taken a while back and does not necessarily reflect the zones final look. 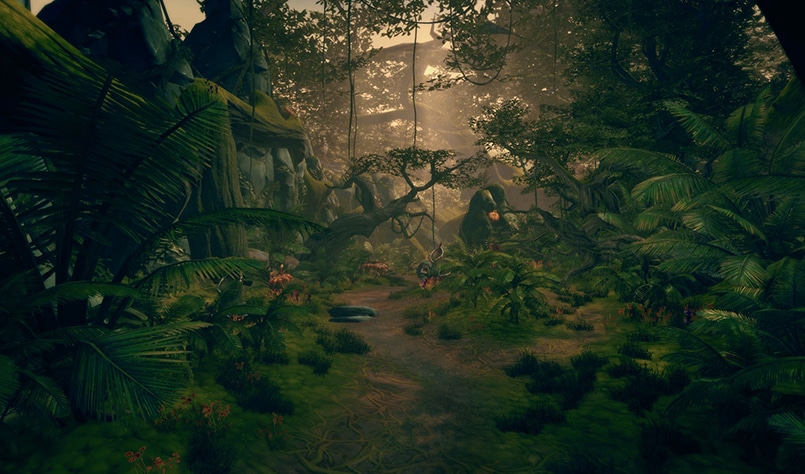 In addition to all this I tag teamed a lot with the designers (Randy,Simon, and Sean) working back and forth on cutscenes. These were really fun to work on and are different from my regular duties as an environment artist. Typically a designer sets up the initial shot, actors, and script. Then I will go in and add additional lighting, set dressing and camera re-framing/adjustments. If it didn’t have any actors or script I handled them by myself. Cutscenes are setup by adding different tracks to the timeline like camera position and npc or player actors. After placing these we move and call on various animations at certain points in the timeline. 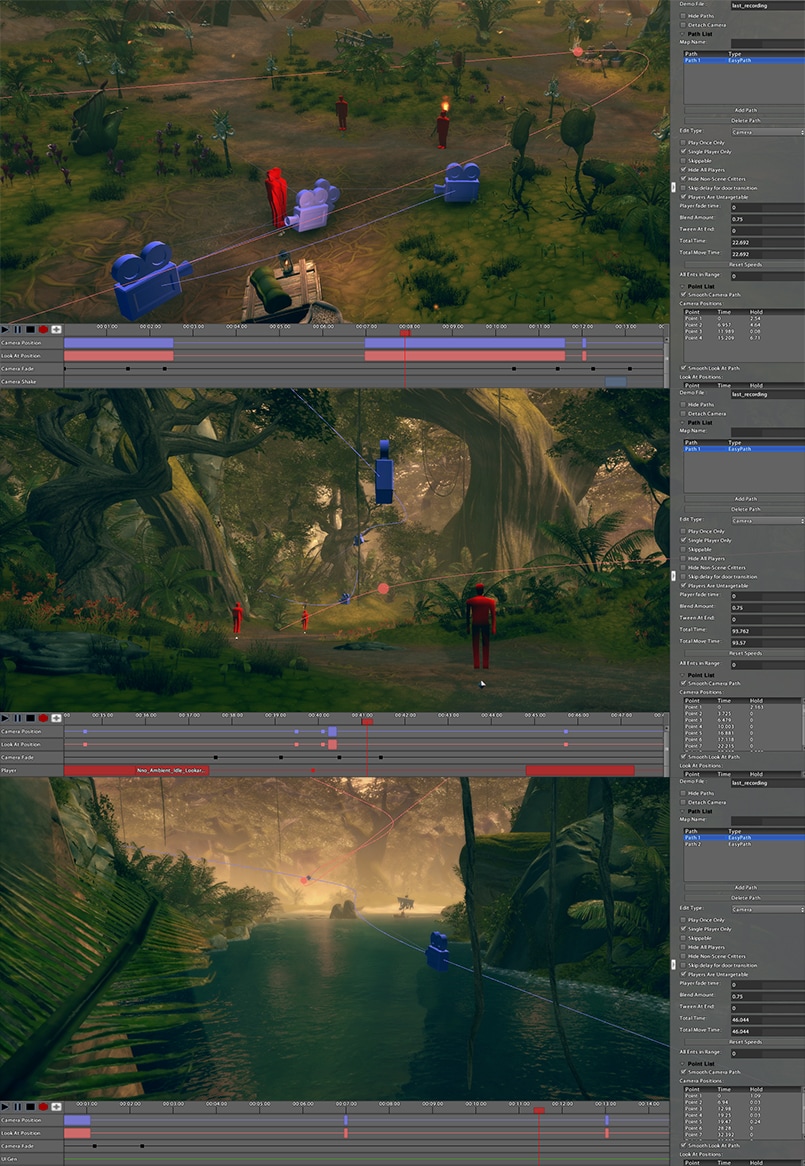 This zone was a lot of fun to work on from concept all the way to the final in game result! I’ll leave you with a handful of screenshots of Soshenstar River. 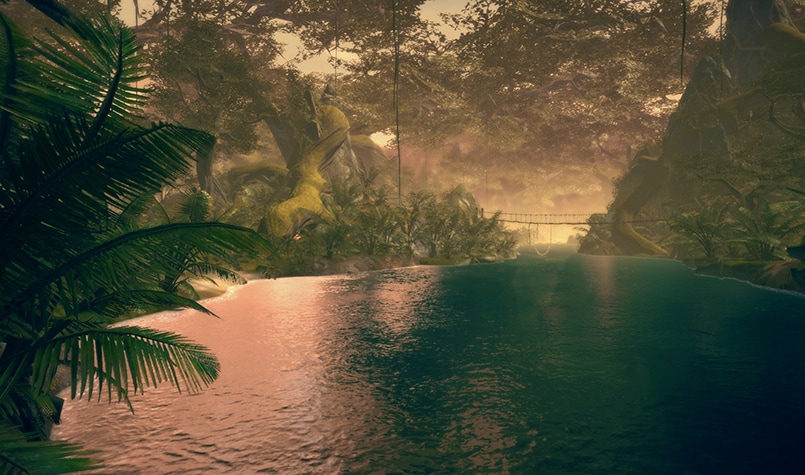 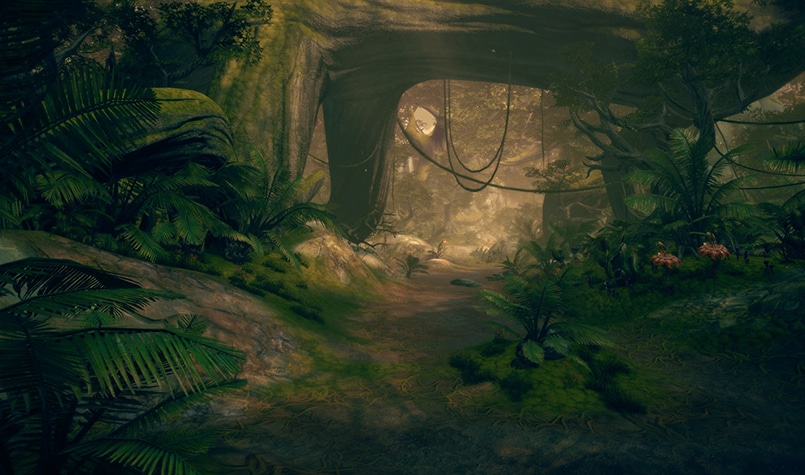 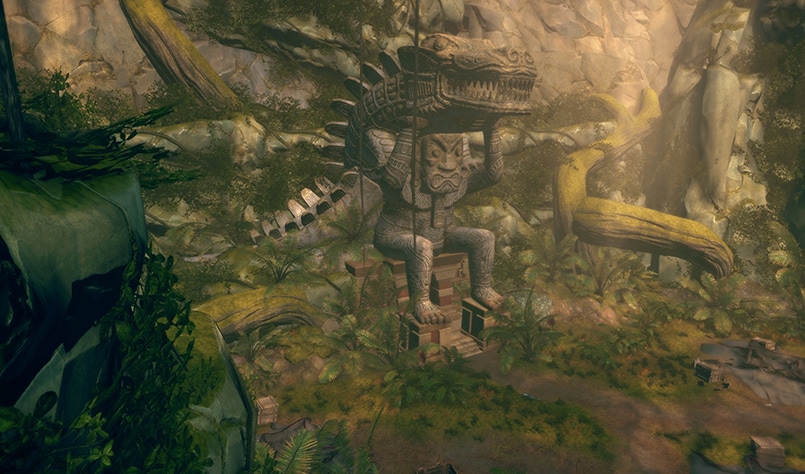 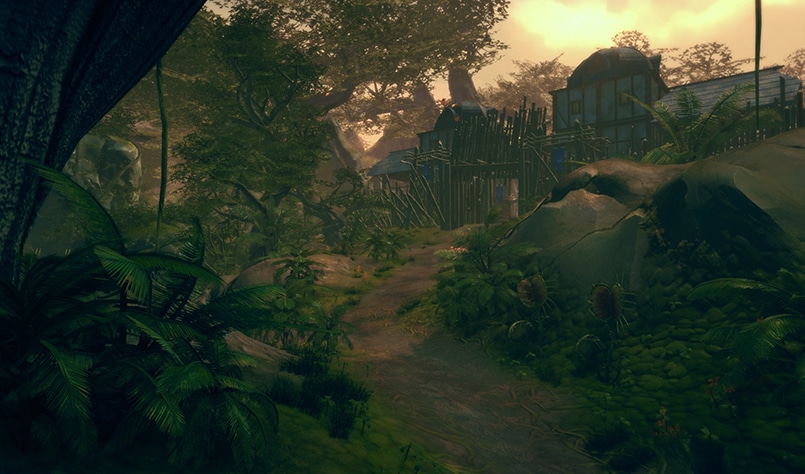 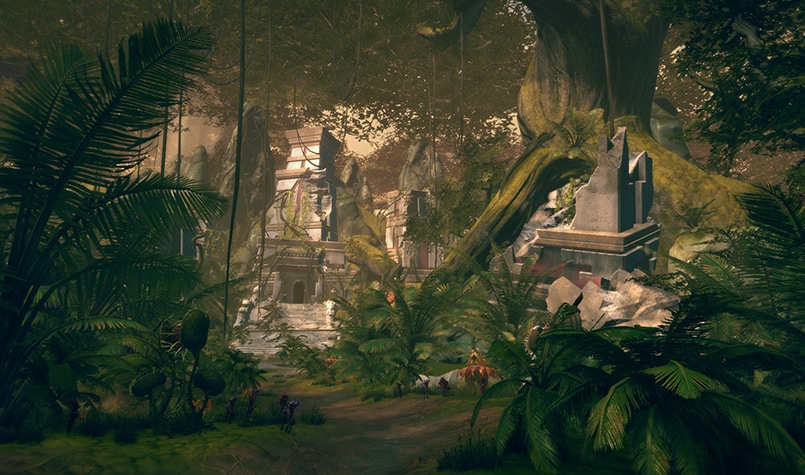 Discuss this blog on the official fourm thread!