An expedition by the heroes of Neverwinter to a long lost land covered with dense jungle haunted by primal beasts and forgotten gods. Wakanga O’tamu, a merchant prince, desperately needs assistance in discovering the source of a death curse which plagues his people and this land. The Jungles of Chult campaign brings players to Port Nyanzaru, a city on the tip of the Chultan Peninsula where players will meet Prince Wakanga O’tamu, the merchant prince and ruler of this last bastion of civilization which fends off the wilderness beyond its gates. From there, players will adventure into the Soshenstar River area, filled with predatory dinosaurs and Batiri goblin tribes hidden amongst the overgrowth that covers ruins of past civilizations. Camp Vengeance, one last stronghold held by the Order of the Gauntlet, can use heroes like you to fight back against the undead plaguing these lands. Jared ‘NoWorries’ Sears here, and no, I’m not talking about the dinosaurs, the cruel Batiri, or the rising undead hordes – those are all perfectly normal. I’m referring to some changes in functionality that this campaign has in store for you all and we’re excited to see what you think!

Repeatable Tasks – Do you find that you can’t always log in every day to complete your dailies, but don’t want to miss out on progress towards your campaign? Well we have the campaign for you! While this campaign will still have weekly tasks which give a large amount of currency, the “daily” tasks in this campaign can be completed when you want to. Instead of once per day each of these tasks can be completed multiple times throughout the week, including on the same day. Your schedule, your way.

Currency – To go along with the changes in daily tasks, we now have a “Weekly Haul” tracker for this campaign which tracks how much currency you have earned and can earn in a given week. It starts off at a limit of 100 per week and as you advance up the center path of the campaign, you increase your cap by 25 each step (up to a max of 175) and also gain an additional weekly task.

Boons – Even the boons are more customizable. The first three points can be used on your choice of six different boons: increases in power, regeneration, deflect, damage and increased damage or better defense against dinosaurs, are all options. Each of these boons can be purchased up to three times for increased gains. The choice is yours. The final boon is a traditional choice of four powerful options.

Once you’ve ventured into the jungle, slain numerous beasts, helped the citizens of Port Nyanzaru, and all around saved the day (like the hero you are), you will have unlocked the new dungeon: Tomb of the Nine Gods. A treacherous adventure with challenges unlike any you’ve seen in Neverwinter before. 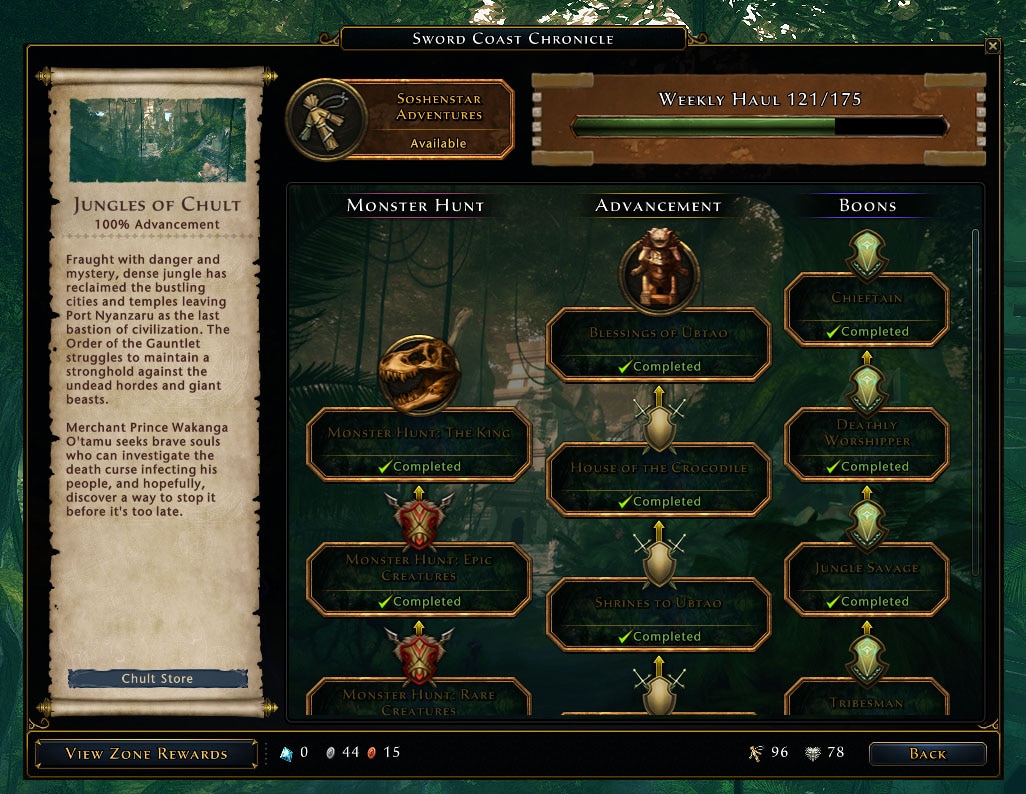 We look forward to welcoming all of you to the stunning and frightening land of Chult, and I’m sure at least a few of you will make it back out alive.