After four successful Beta Weekends, we're nearing the next phase of Neverwinter, the upcoming Dungeons & Dragons action MMORPG, as it nears Open Beta! Neverwinter Founders will have the first opportunity to enter the Forgotten Realms and battle against Valindra Shadowmantle to keep Faerûn and the city of Neverwinter safe. Also, Founders will also be the first to explore the Foundry and the newest in-game content, first to modify and improve their characters through the Gateway web portal, first to progress towards the raised level cap of 60, and more!

Want to be the first to claim your guild name? How would you like to dungeon delve and explore new content past level 50? Become a Founder today for your chance to become the strongest player in Neverwinter before anyone else.

If you are a Guardian of Neverwinter, you will be able to play Neverwinter starting April 27, 2013 at 9 A.M. PDT (Pacific). (When is that in your time zone?)

You can pre-load Neverwinter's Open Beta game client by heading to the download page on April 20, 2013. If you already have an Alpha or Beta Weekend game client, just open the launcher to begin patching - no need to redownload!

Click here to register for Neverwinter, the upcoming free-to-play Dungeons & Dragons MMORPG. The best part about Neverwinter: it's free to play! Prepare by becoming a Hero of the North today with a Founder's Pack purchase!

Here are few fun facts for Neverwinter fans. Look at the savings of more than $25M if you played Neverwinter! 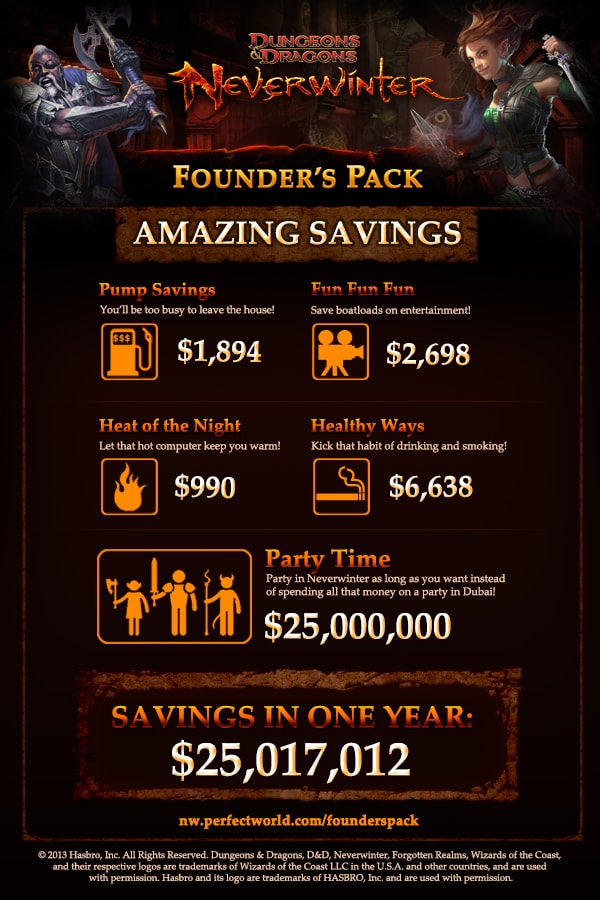