The ancient kingdom of the giants, Ostoria, fell thousands of years ago, collapsing under the stresses of the wars against the dragons and betrayal from within the ranks of the giants themselves. Almost all of the great treasures the giants accumulated during their rule are now lost, but not all.

In the frozen lands of the north, once the center of Ostoria, are left a few relics from that ancient time. Those relics now lie in dangerous places. Adventurers who wish to aquire these Ostorian relics must brave both the fierce creatures that guard them, and the cold itself (made far worse by the Storvald’s abuse of the Ring of Winter). The relics are worth aquiring, though, for they are infused with Voninblod, the ancient power of the giants of old.

In addition to the Ostorian relics, scraps of armor of the small folk were sometimes collected by the giants, perhaps as trophies of war, or as gifts for favored servants—no one today knows for certain. These scraps can, with much care (and a lot of Voninblod), be restored to their original state, and they serve as extremely powerful armor. This relic armor will help the wearer resist the supernatural cold known as Everfrost. But even ignoring its cold-resisting properties, the armor is the most powerful currently known in the Forgotten Realms, and thus is more than suitable for general-purpose adventuring as well. It’s not easy to acquire, though, so adventurers will want to look for additional ways to protect themselves from Everfrost. Fortunately many are available, including potions, armor kits, items of clothing (shirts and pants), and even guild food.

If you’re searching for relics in the frozen north and you feel you need some help, there are a number of things available: 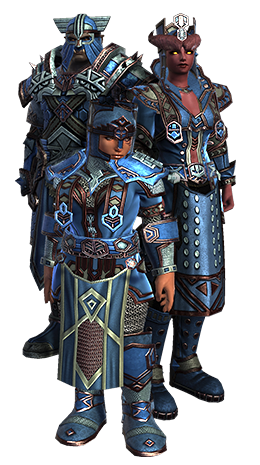 Frostborn armor is available in the Tarmalune Trade Bar Store. While not as powerful as Relic armor, it can bridge the gap as you look for everything you need to restore your relic gear!

Archaeologists’ trowels to help you dig for relics. No self-respecting archaeologist would want to be without a digging trowel.

A Remorhaz companion that spits fire at your enemies. That would be plenty awesome all by itself, but it does even more. Whenever you dig for a relic, the Remorhaz will go digging itself, and 20% of the time (40% of the time at rank 30) it will find an additional relic for you!