Benalia: The Evolution of an Environment

Benalia shines brilliantly from the continent of Aerona as one of the most powerful nations on the plane of Dominaria. A majority of Benalia’s inhabitants worship the renowned planeswalker Serra as a goddess, so the region is naturally bathed in the golden light of white mana. Not all is peaceful though, as there are those who would challenge the balance of power on Dominaria.
Given that Benalia has long been one of the most iconic settings of the Magic Multiverse, we wanted to make sure we got it right. We decided early on that it would be one of the first regions we would tackle as a team, and that development journey informed much of our approach to the environmental art of Magic: Legends. Setting the Mood
The visual mood of any region must be in harmony with the story and game design throughout the Overworld and the stories surrounding it. Each region will have a vastly different feel but they will all have cohesive elements that inform players that they are still playing the same game from region to region. Benalia is the land that helped us define these standards. Here are a handful of the most important visual standards we learned:

1. It looks like the card art came to life.
2. The environments have a painterly look across the entire scene.
3. Everything has an otherworldly atmosphere.
4. The tonal values are not too dark, not too light.
5. The colors of the world are slightly less saturated than the action taking place in them.
6. The world is a distilled reality with the noisy bits eliminated.

Building Benalia
Benalia was our testing ground for Magic: Legends in the early stages. It was the perfect candidate to workshop the visuals and help define our environments across the entire game. Benalia has a rich, well-known history in the Magic cards and lore while the architecture, geography and foliage fit within the style of high fantasy. We locked in the high level details of the production process and transposed it to all other regions. This was a necessary step to ensure the game looked and felt cohesive as a whole.
Here are some defining processes that we developed in Benalia that have helped us make the game environments possible.
The Instanced Tile

Our Lead Content Designer, Sean McNamara, previously wrote about our exciting instanced mission system. On the environment team, we use a much simpler instance system to build out our worlds. We work together to make a complex network of environment tiles that are used as the basic building blocks of our settings. Each tile is 50x50 feet and designed to fit seamlessly with any neighboring tile, so they can be configured in multiple ways to build entire levels from beginning to end. Each tile is made up of a base ground tile with the ability to paint a blend of five material layers. This allows the artists to paint unique paths throughout the level without altering the original tile. Since each tile receives a unique touch, it is virtually impossible to tell that you are playing a game with instanced tiles.
The Instanced Object
In a similar development process, each object is also instanced and able to be nested within a tile. For example, instances of our trees, rocks and foliage are composed into large vignettes and placed in the tile instances in unique configurations. This makes each tile appear complex as assets are varied. This gives us the ability to create a massive amount of content in a consistent way. If changes are needed, we can make a move on one tile and it will be updated across the entire region.
The Blended Material 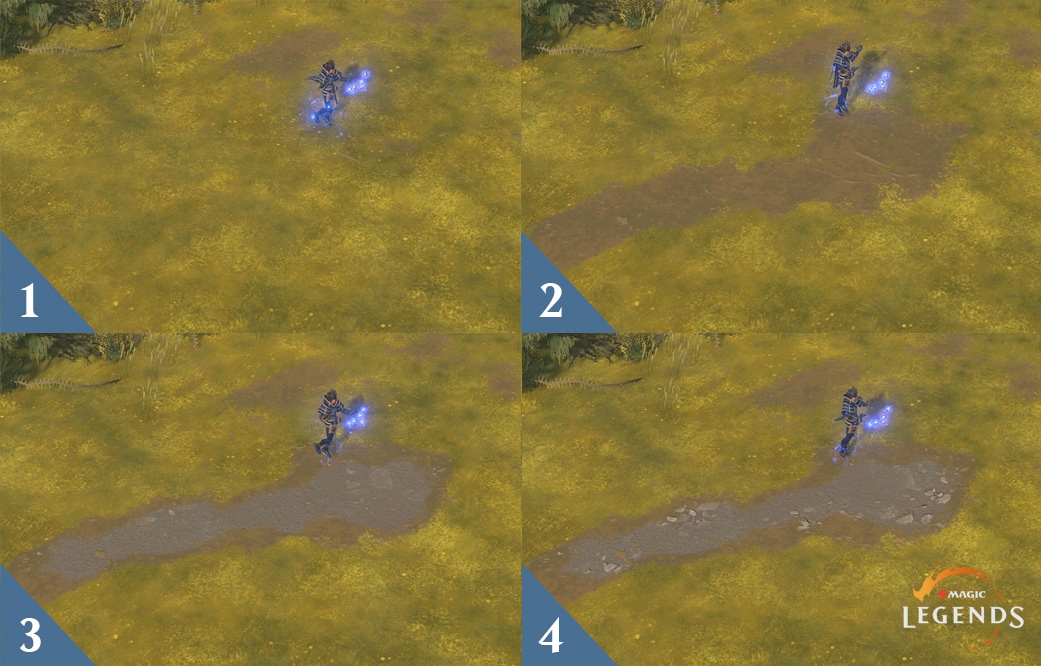 Putting the Whole Thing Together

The players, creatures, and spells are the stars of the show in Magic: Legends. The environments are but a stage for players, characters and VFX to exist on and support each other. The overall effect is a cohesive action-filled experience in which players get to fulfill their Planeswalker fantasies within the Magic Multiverse.
Magic: Legends is a game unlike anything Cryptic has ever developed before, so it has driven us to make several discoveries along the way and form new environmental development processes. By taking our time to build out visuals for the storied nation of Benalia, we realized that we needed a dedicated architecture team. Members of said team need a deep understanding of the overall game design to establish regional layouts before delving into level design. This drove us to put together the first ever dedicated Level Design team for Cryptic Studios. As evidenced by our exploration and development of Benalia, this dual-sided approach has really brought the Magic Multiverse to life. Our environment artists focus on building worlds, setting up lighting, and creating an immersive atmosphere for players, and our level designers are not held back with composition, lighting, and asset creation concerns. They can focus completely on making levels that make sense of the intended design, and we can bring more regions like Benalia to life in a big way.

We'll see you in Benalia!