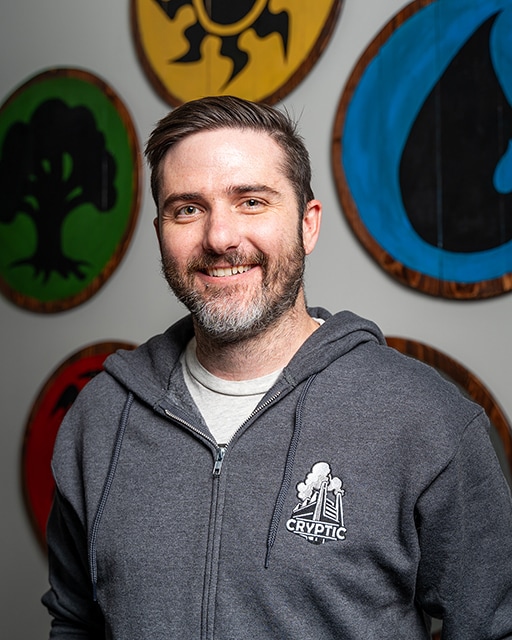 My name is Sean McNamara, Senior Content Designer on Magic Legends, and today I’ll be sharing details on the different types of action-driven experiences that you will get to enjoy as a player in our upcoming game, Magic: Legends. Our game takes place in the expansive Magic Multiverse, which contains several different planes each filled to the brim with unique stories and backgrounds. Our goal as a team is to create a game that speaks to this expansive nature, catering to different playstyles while also pushing the engaging narrative and iconic feel of Magic: the Gathering.

A Multiverse of Experiences

Magic: Legends features an ongoing story featuring the player’s awesomely powerful Planeswalker front and center. In order to deliver the story in a personal way that focuses on individual players but also allows for multiplayer interaction, we needed to develop different ways for players to enjoy it. Instances, areas of mission-driven content, take the form of individual maps that players can enjoy solo or with friends. Open world content, which we refer to as the Overworld, consists of large open areas where players can enjoy emergent exploration. Lastly, Hubs are safe areas in which players can interact with friendly NPC’s.

Let’s jump right in and talk about the ways players will experience content starting with Overworlds: Each region or area within a plane consists of a large map called an “Overworld”. These maps are massive, explorable landscapes teeming with life and filled to the brim with exhilarating action. Players will encounter a number of compelling Overworld activities while carving out their Planeswalker legacy, including: 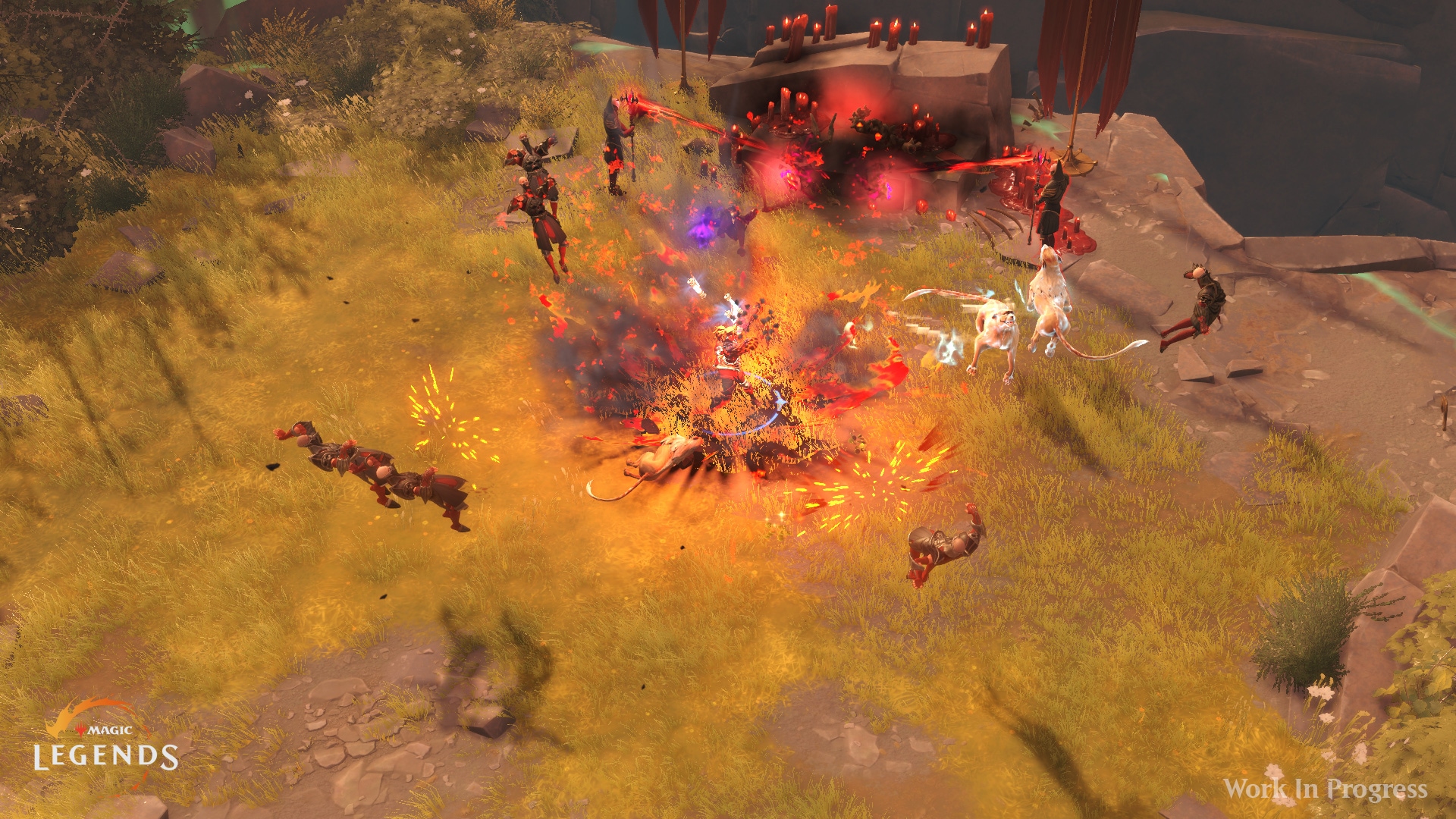 Skirmishes: These are bite-sized pieces of emergent activity that generally last between 1 to 4 minutes in length, with objectives that scale in difficulty based upon their rank. They come in three levels of rarities, which are ranked as Minor, Major or Special:

Minor Skirmishes: These normally last a little over a minute and take the form of a simple event or fight themed on the region the skirmish is set in. For example, a player in Shiv may happen upon a small group of goblins raiding a village and be tasked with defeating them to save the inhabitants. Successfully completing the objectives of a Minor Skirmish rewards the player with more gold and spell shards than random Overworld encounters.

Major Skirmishes: These last about twice the length of a Minor Skirmish and feature increases in difficulty and rewards. Fail conditions, which are objectives that must be met to continue the skirmish, are introduced at this rank. For example, a player in Benalia may encounter some roving cultists who are attacking a Benalish encampment. If players fail to protect the equipment or characters in the camp, the skirmish may end as failed. Major Skirmishes grant more loot than Minor Skirmishes, meaning players are more likely to unlock new spells.

Special Skirmishes: These are the rarest type of skirmish, with only a small number of Special Skirmishes existing in each Overworld region. They occur very infrequently and feature much more difficult battles in which players may encounter dragons, giants, or large armies. These include fail conditions like Major Skirmishes along with fight mechanics based on local story missions. Players who succeed in overcoming these challenges are granted with fantastic rewards, building on previous tier rewards with guaranteed rare drops. Control Battles: Each Overworld region houses three tower-like structures that tap into an ancient power. Players who seek to take advantage of this power must wrest control of the three towers from enemy armies. Players who manage to defeat the enemy hordes and take control are rewarded with the ability to detect and travel through rifts in the local region. Each of these rifts leads to a small dungeon known as a Shattered Reliquary. Shattered Reliquaries: Players who travel through a rift will find themselves inside a Shattered Reliquary, a small dungeon built to contain and protect mysterious Artifacts from a bygone era. Players who overcome the challenges will be rewarded with a relic cache, which has a chance of unlocking a new Artifact like the Goblin Supply Manifest shown below. 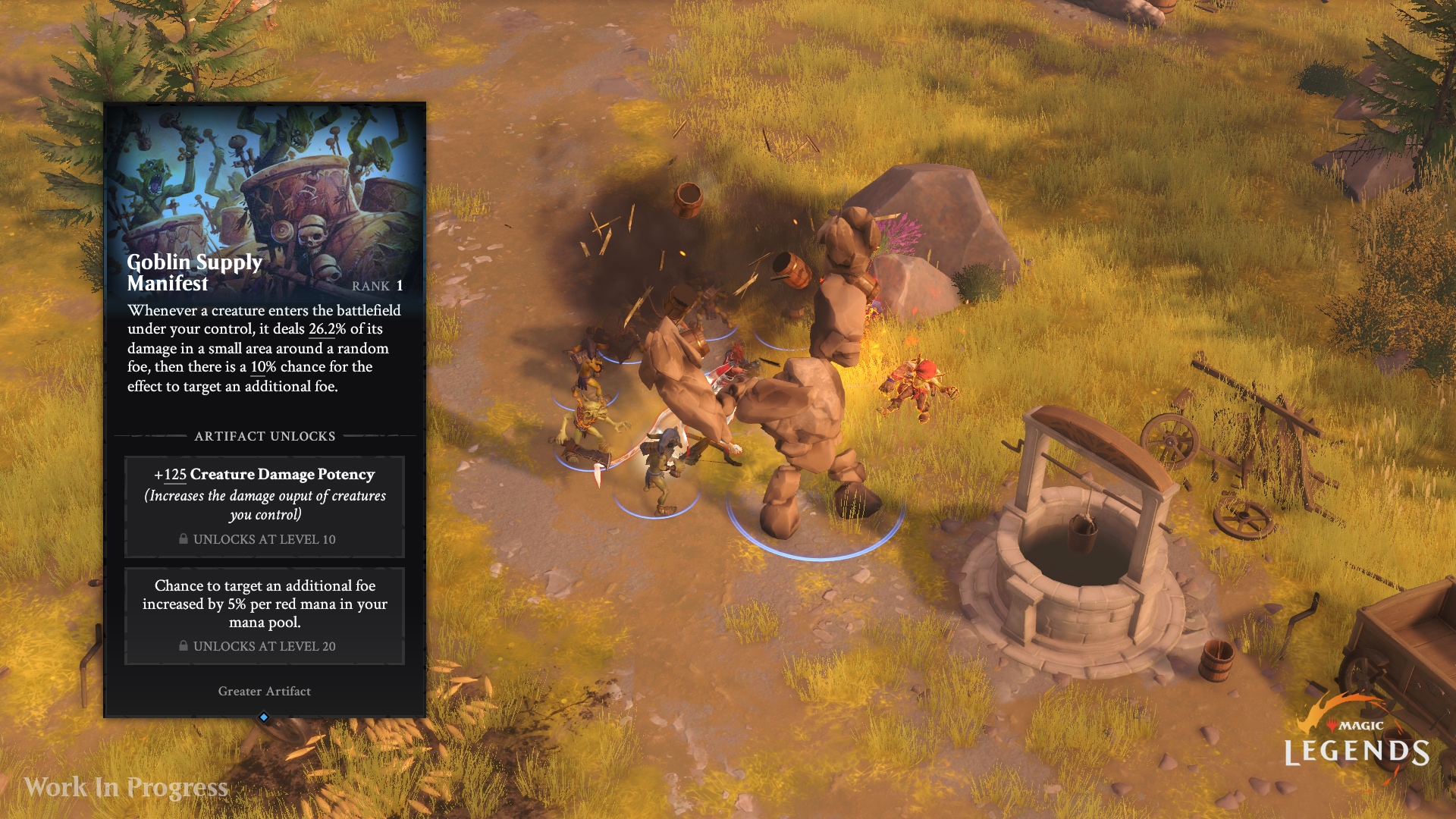 Mythic Encounters: These encounters pit players up against Mythic versions of creatures in their respective overworld, with one or more augments making them even stronger. There are more than 20 of these powerful affixes, which include effects like: ‘Hypnotic’, which causes the Mythic enemy to drop slow-moving mist hazards on the ground - touching one of these stuns you for a short time so watch your step. The ‘Vindictive’ augment will randomly apply a strong damage reflection shield onto the Mythic enemy, so time your damage windows well! Triumph in these encounters results in a great quantity of rewards across Spell Pages, Relic Fragments, and various currencies.

Overworld Escalations: As up to 6 players in a specific overworld map fulfill deeds, claim mana towers, complete skirmishes, and prevail in Mythic encounters, a Planar Instability bar will fill. When the bar is filled, a two minute timer will begin counting down, indicating that a portal will open soon. When this timer expires and the portal materializes somewhere in the overworld, another timer will begin - signaling that it is time to locate and enter the portal to defeat powerful world boss Echoes. One of the two Echoes will be a main boss from whichever region you entered the portal in, the other echo will materialize as a powerful enemy from any of the regions/planes. 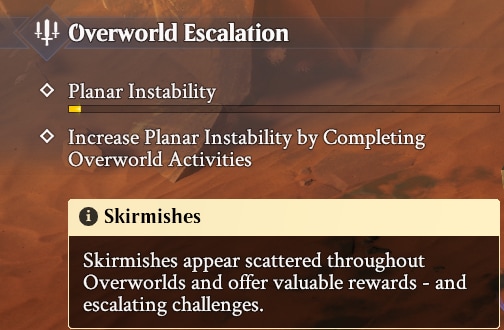 Upon defeating these Echoes, you will obtain an Orb of Shadows in addition to various other loot (gold, pages, equipment pieces, etc.). A character is limited to collecting five (5) Orb of Shadows each week. These Orbs of Shadows can be taken to the Mana Vault in your personal Realm and exchanged for Unrefined Aether, Gold, Eternal Echoes, and Chromatic Mana.

Mana Wisps: These are enigmatic beings in the iconic colors of the Magic Multiverse. They randomly spawn in regional Overworld maps and wander the area aimlessly, wreaking havoc by enhancing the abilities of any creature they happen to fly by. Players that manage to skillfully destroy the mana wisp or defeat wisp-enhanced enemies will be greeted by an explosive cascade of loot, including massive quantities of Planar Mana that can be used for advancement in a player’s Realm.

Hubs are designated safe spaces within the Multiverse where players can undertake a number of activities. These take the form of small outposts and towns that can be broken down into two types:

Main Social Hub: This is a large social area that players can travel to and take a moment away from the action. The map is able to hold several Planeswalkers, so it serves as the primary meeting spot for players across the game. Beneficial story characters and merchants also exist in the main social hub, which also makes it the perfect place to learn more about life in the Multiverse and socialize with fellow players. Overworld Hubs: Each Overworld map contains an outpost or town bustling with captivating characters with stories to share. Players will need to interact with them to advance the main story of the game and unlock regional missions along the way. An important thing to note is that enemies cannot invade these spaces, giving players an opportunity to change their loadout, build decks, or swap their active class. 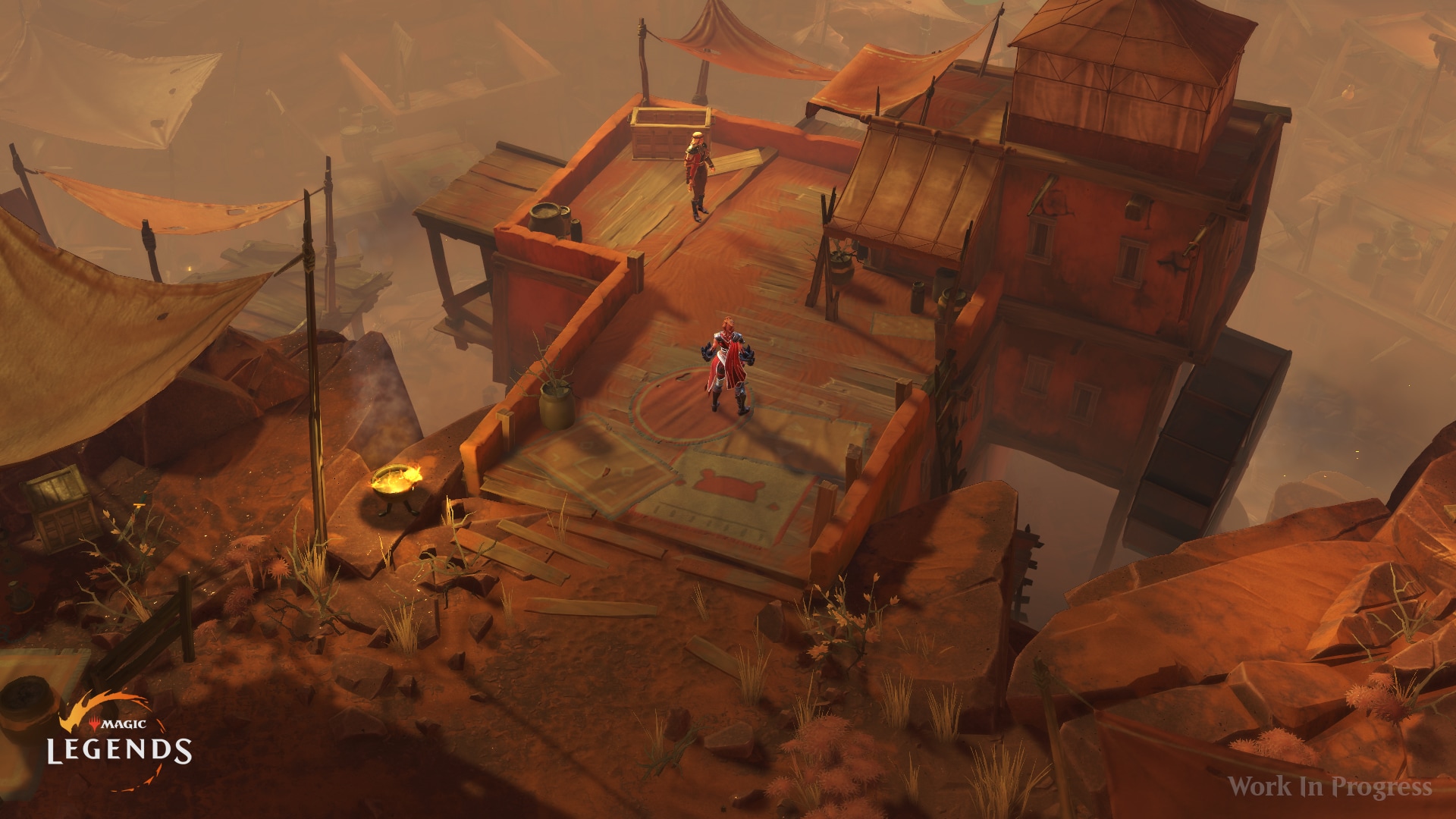 In addition to the persistent activity of the Overworld, each region contains a number of engaging replayable instances, which are individual maps, scenarios, or dungeons set aside for players to enjoy privately. There are two different types of instanced missions that players can undertake in one of three ways; players can choose to test their mettle solo, crush the challenges with two friends of their choice, or join a queue to be teamed up with other random players. Once a player has unlocked the Cartographer workstation (which we will describe in more detail in the future), they’ll gain access to even more ways to explore instances missions.

Story Missions: These are immersive story scenarios that encapsulate a defining moment within the ever-expanding Magic: Legends narrative. Players are thrust directly into the gripping action as the story unfolds and establishes their Planeswalker as an important part of the Multiverse. An average Story Mission lasts 15 to 20 minutes, with some exceptions in later portions of the game. Players unlock respawn points as they progress through the instance and explore their growing repertoire of Planeswalker abilities. If they happen to be defeated while trying to complete their mission objectives, they are returned to the nearest activated respawn point without penalty.

Once a player has unlocked an instanced story mission, they can run it as many times as they desire. Each time the player completes the mission objectives and defeat the boss, they are granted several epic rewards including Spell Shards and Planar Mana.

Ordeals: These are highly replayable instanced challenges where players really get to test how much their Planeswalker powers have grown. Ordeal challenges are themed per region, so players in Shiv may find themselves defending Onkoom from an onslaught of crazed goblins. Similarly, a player in Benalia may be tasked with disrupting a horrible ritual the cultists are using to ravage local inhabitants. Each Ordeal challenge is timed, with players earning a score based upon their performance towards mission objectives. Rewards are tiered and granted based upon the player’s score once the Ordeal timer ends, so a player who wants to maximize their rewards needs to keep growing their power and challenging themselves to be the best Planeswalker they can be. 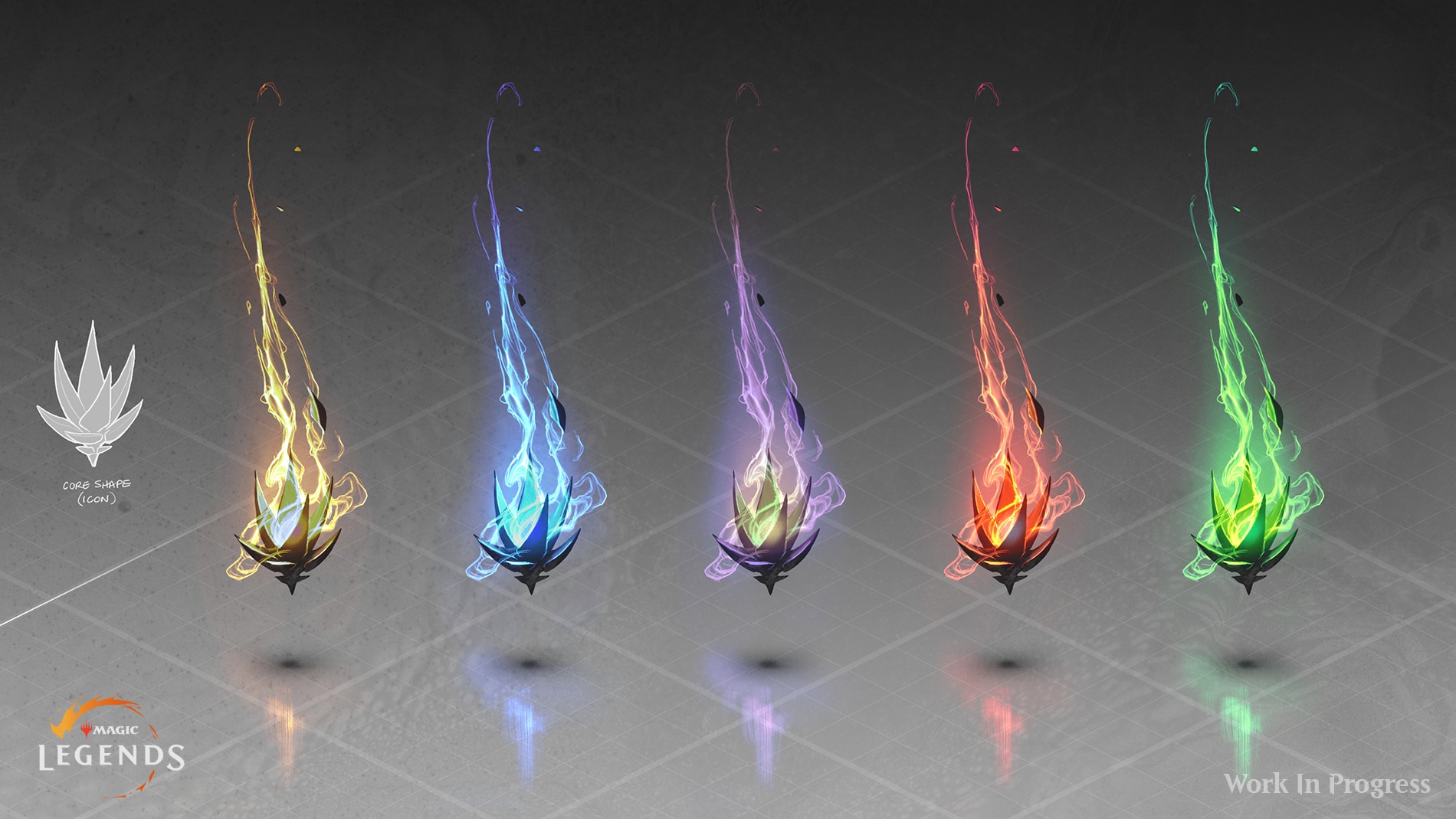 We hope you enjoyed this peek into the playable content we are using to bring the Multiverse to life in Magic: Legends. We aim to deliver something all kinds of players can enjoy as they empower their Planeswalker and become part of an ever-growing narrative. Between the progression systems we detailed throughout April and the variety of playable content we detailed today, we feel we are achieving that goal.

We have more to tell you later this month, and we'll be kicking next month off by covering Legendary Creatures and the AI Director, a new development tool we created in-house to guide emergent combat encounters within the game. Make sure to follow us on Twitter and Facebook to stay up-to-date on the latest news and reveals, and join us on our official Discord server to chat with the team and other fans alike!

April 16 Hotfix Notes
General: Upon logging in Planeswalkers will be granted 2,725 battlepass XP Daily Region Rep progression in Benalia was blocked temporarily. We have compensated everyone with battlepass XP ...
Read more
State of the Game - Open Beta Week 4
Executive Producer Steve Ricossa is here to give the fourth post-launch State of the Game update!
Read more
April 15, 2021 - UPDATE NOTES
Read up on our Mid-April Update with hundreds of bug fixes and QoL improvements.
Read more