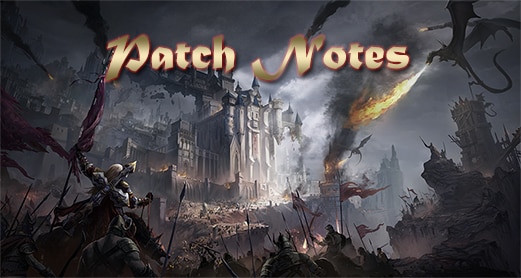 Check out all the changes in Dysil's Wrath below!

-Added Majestic Orb, which has a chance to give the Selvans flying mount.

-Added Pandora’s Orb, which has a chance to give the Wicked Terminator pet.

-Added mystery sales, some items throughout the cash shop are listed at sale prices; see if you can find them!

-Switch a party to a group from the T menu. Groups can have up to 36 members and cannot enter normal instances.

-Group members do not gain bonus EXP or Soul Power.

-Groups of 12-18 can enter Dysil’s Crux raid instance through the Dragon Tower Guild base building.

-New scenario quests from the Guild Manager and others.

-There is now a chance to get a Guild Lodestone as a reward for guild base quests.

-Added Mineral Satellite where you can mine many different minerals and have a chance to mine Star Crystals.

-Added Garden Satellite where you can collect many different plants and have a chance to gather Soul Leaves.

-War of the Ancients: If a player has not completed round 5 or 10, they can follow other players to jump ahead to round 15 and will automatically complete all previous rounds after beating round 15 this way.

-Queue for any PvP instance to enter the cross server area.

-Queue again once in the cross server area to enter PvP instances with players from other servers.

-Friends from other servers only appear in friends list while in cross server area.

-New Arena gear is available from vendors in Nightfall Citadel and Freedom Harbor.

-Follower of Night and Moon quest can be taken from Morin in the Sea of Oblivion.

-Added guide quests to unlock key events as you level up, rewards soul leaves for each

-New format for Events menu, there are now shortcuts to specific events from the front page.

-Optimized bag interface, there are now tabs for different types of items and the number of occupied slots listed.

-Added scoring system for gear, attributes and Mastery and Resistance.

-Added Flower List. Players who receive the most flowers will appear on the flower rank list and receive graphic titles.

-Flower score can be traded for items with Larry White in Freedom Harbor.

-Use Gloop items to increase masteries and other attributes for future PvP.

-Quick Mount decreases the time it takes to activate a mount.

- When a character in Stealth or Invincibility walks close to Fel Irradiated Ore, the ore will remove the buffs from the character.

-While Blood Control is active, Vampire's Invigoration will cause the target's each hit to drain additional blood equal to 25% of the vampire's attack.

-Dark Contract recovers additional health equal to 5% of your max health and recovers your own health 3% of your max.

-Seed of Life restores additional health equal to 5% of your max health and will heal a second time 5 seconds after casting.

- While using transformation skills like Imp Form and Gale Wings, you will no longer dismount.

- Basic attack increase of Nightmare Termination and Dark Nightmare from Agony and Blast orbs increased by 5% each.

-Bleed effect from Mutilation now activates once per second instead of once every 2 seconds.

-Deputy of Death increased crit strike rate by 2.5% and each hit has a chance to trigger the Rampage effect. Each level of rampage increases your crit chance by 1.5%.

- While Power Surge is active, Aimed Shot will have 50/100% chances to stun target for 3 seconds; While Precise Aiming is active, accuracy is increased by an additional 15/30/45/60.

-Added additional effects to Lv70 Nyos Nature: Accuracy is increased by 10 while in Magic Meditation and After activation each 1 Nyos' Vice Rune Energy will increase accuracy by 5.

- Mages now can correctly see all effects of Aria Aegis, and mages can use Magic Purge 2 times to remove the Aria Aegis effects caused by Bard's skill Sonata of Water (the first time removes the mana and health restoration effect, the second time removes the damage deduction effect)

-Reduced cool down of Crushing Roar to 10.

-For 5 seconds after Crushing Roar is cast, cooldowns are removed for Sword Cyclone and Lightning Wings. Their basic attack is reduced by 50% and no controlling effects occur. The aggro bonus is increased by 300% of attack.

-Reduced the cooldown of mass taunt to 60 seconds.

-If a time limited item has less than 3 hours remaining, switching into cross server will cause the item to disappear.

-Entering the cross server area while using an item with cooldown, the item will be de-equipped and the cooldown will increase by 3 hours even past the max cooldown of the item, this can be corrected by switching back to your home server.

-Entering cross server before the Time Lock has finished will increase the time lock by 3 hours, this can be corrected by switching back to your home server.

-Dysil’s Crux instance is listed by the incorrect name in the recommended events page of the Events menu.

-Incorrect times are listed for 3v3 and 6v6 Arena, Arenas are open only on Monday/Wednesday/Friday and weekends, not every day.

-1st prize graphic title for the Flower list does not display the correct image.

-Ferrie has an empty shop.

We hope you enjoy this newest addition to Forsaken World, Dysil's Wrath!

Weekly Boutique Update
Take a look at our final Boutique update of 2021!
Read more
Weekly Boutique Update
It’s that time of the year! Here are our latest offers for your Christmas shopping in Forsaken World.
Read more
2021 Winter Bonus Currency
From now until January 2nd 2021 at 9AM PT (18:00 CET), you'll be able to unlock bonus currency on the Arc platform for select Perfect World titles!
Read more