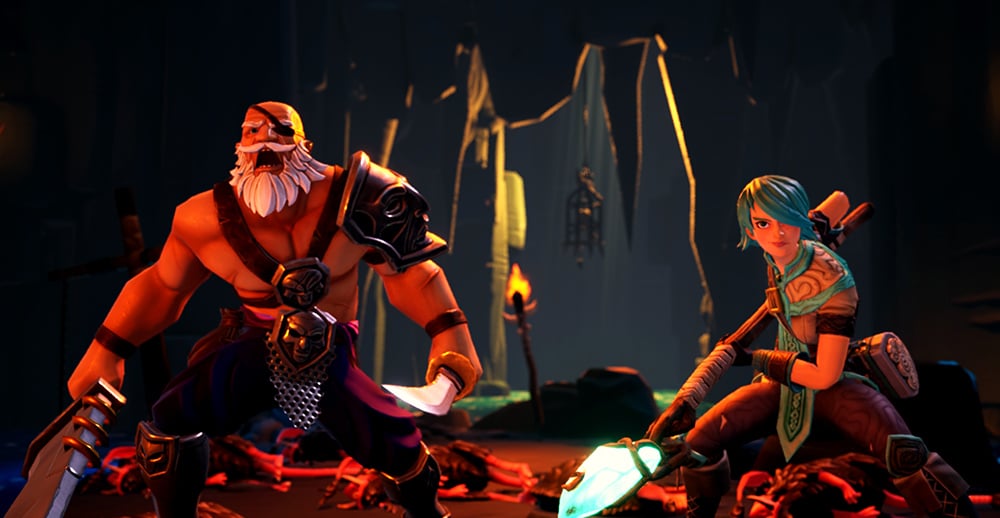 Howdy, Frontier folk! If you’ve already received your Closed Alpha code you can begin pre-loading the game now. Servers for Closed Alpha 2 are currently scheduled to go live December 7 at 10:00 AM PST. In the meantime, Tyler has been good enough to provide some dev-comments along with the patch notes for you to sink your teeth into. See you Friday!

Please remember, the EULA governing this Alpha does prohibit sharing/capturing of media such as screenshots, video, and livestreaming.

Tyler: Ice weapons with chill and freeze affixes have been added in Alpha 2.  Chill will slow by 50%. Freeze completely stop an enemy. Killing a frozen monster will shatter them into satisfying little chunks of ice. Altogether, these offer some interesting tactical trade-offs to some slightly lower dps. Plus, they are pretty cool. Tyler: Each relic weapon should inspire a new character strategy. No two relic weapons demonstrate this better than Flash Freeze and Cursed Staff.​

Tyler: Flash Freeze is our first tanky relic weapon. It freezes monsters that attack the player and gives a massive crit bonus when attacking frozen monsters. So cool! 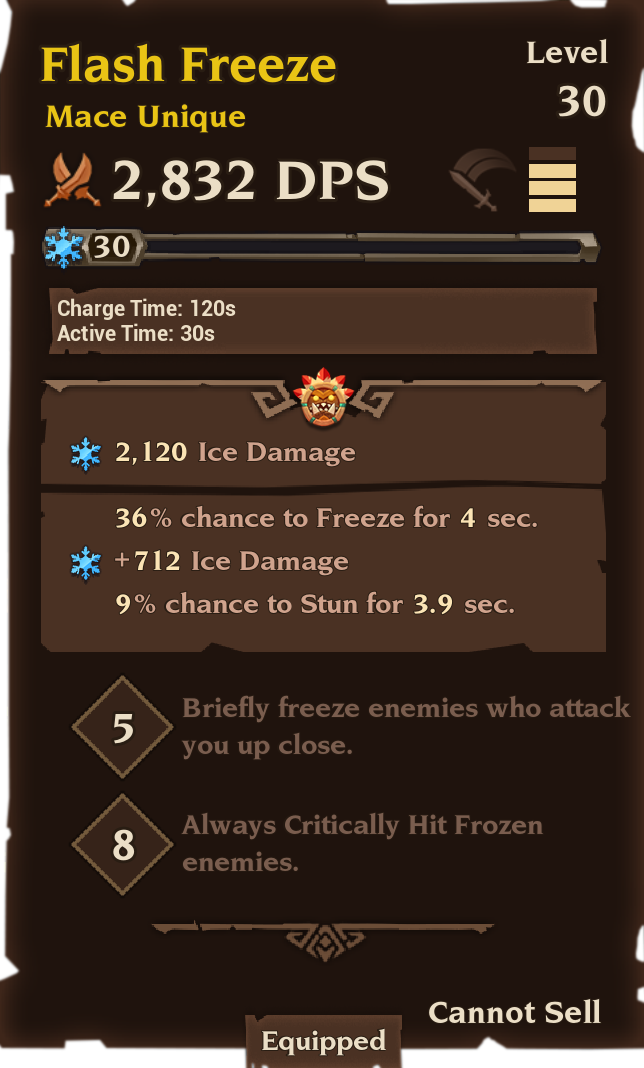 Tyler: Cursed Staff comes with both an active skill for slowing down monsters and the mechanics to build up a small horde of netherlings. It's got the crowd control and summoning that really matches some player's love of rolling deep with a horde. We will add more summoning mechanics to the game over time to complement this, but Cursed Staff is a good start. Tyler: Forts are more than account-level progression. They are more than a crafting center. They are a place to show off your creativity and accomplishments. When going through the passages, make sure to check out what other players have made.

Tyler: We felt and heard a lot frustration with the item equip skill system. Frankly, we knew that the design was a bit risky, but we wanted to try it.  What we learned was that having item equip skills compete with active and passive skills for precious Skill Points just feels wrong. Also, using Skill Points from one frontier in the next one just breaks the whole idea. It's a high priority for us to figure out the next version of this and get it into the game. However, it's going to take some head scratching, code changes and UI changes. For now, we just nerfed the cost of item equip skills so that it isn't quite so painful.

Tyler: Potions need to feel limited so that players care about whether they get hurt. In Alpha 1, characters started with too few potions and eventually were swimming in potions. We have a few ideas about how to address this.  We also want to add more depth and variety to potions. Sara, Shawn and Christian are already working on several changes to the Potion system - which won't make it into Alpha 2. Meanwhile, we just turned down the potion drop rate and increased starting potions and quest rewards hoping it would help in Alpha 2.

Tyler: Oops, we thought we had this working, but it had fallen between the cracks. Party members should all get loot for kills - as long as they are nearby.

Tyler: We want each frontier to feel like a separate challenge that builds up a separate set of gear for a character. The need for poison armor definitely accomplished this when going from Goblin to Hyvid. However, weapons were still pretty darn effective when in the wrong frontier. So, we got out the nerf bat. The transition should still feel gradual when starting out a new frontier, but hopefully players won't be smacking Krronk with a goblin sword anymore.

Tyler: We don't want harvesting to feel like a chore. We want players to be a little excited when they find a harvest node. In Alpha 1, the nodes were so frequent and the drops so reliably small that it felt grindy. So, we are reducing the number of harvesting nodes and increasing the number of resources that can drop. We also made the drop sizes more random so that players can be anxious about what the die roll will be. We also added resource drops to a few monsters.  Hopefully, this all makes it feel like less grindy and more just a part of adventuring out in the world. If not, we will take another look at how to improve it further.

Tyler: Someone found a great exploit here, they let us know about it and we cleaned it up. I really want to thank the player that spoke up about it and helped make this a better game.

Tyler: Equipping a relic weapon should feel like "Now I turn on my super powers! Fear me!" However, we went a bit too far with that in Alpha 1. Some players were killing WideLoad in 3-4 shots - which is a buzz kill. It turns out we had cranked up the relic weapon dps in two places - which gives us numbers that are bonkers. In addition to the dps nerf, we also buffed up the chance for relic weapons to do things like burn, poison, bleed and chill - which should be a bit more reliable.  Overall, this was a massive tuning change and we probably will need to adjust it again, but hopefully we are closer to the target now.

Tyler: Ideally, the relic weapon level, average item level and monster levels should be pretty similar. After Alpha 2, Christian did some coding magic to factor in all of those things when giving experience to a relic weapon. We increased the cost of some of the higher Relic levels; odds are it’ll still need some tuning.

Tyler: Crowd control can be powerful and fun, but it shouldn't be so powerful that the game becomes trivial. Hopefully this change brings us closer to fun.

Tyler: The combination of weak potions and constant poisoning was just brutal.  Now the Hyvid potion heals slightly more than the goblin frontier's potion, but it does it over time and cures poison. We want players to get a bit frightened when poisoned and use a potion to fix it.

Tyler: We have a few item affixes that impact skills. These came in pretty hot before Alpha 1 and had some issues. We've done some tuning changes, shifted which items they drop on and adjusted their chances for dropping. This interaction between skills and items should give players some tools for making interesting builds.

Tyler: Escape skills often have long cooldowns and limited damage.  However, we felt like ramming robot had potential to be a bit more than an escape skill. So we buffed it a bit.

Tyler: The Forged was getting wrecked in boss fights - especially when trying to use Vortex Bomb on anything. It got so bad that players were using Vortex Bomb off in the corner to be safe - which is awful. We considered a few options and decided to give a big armor multiplier while the player is using Vortex Bomb.  Hopefully this fixes the situation, but we will keep an eye on it.

Tyler: Wow, Hyvid was hard in Alpha 1.The Hyvid were poisoning all of the time; so now only the Hyvid Fliers and Hyvid Guardians poison players. Hopefully with the changes to the mobs and the Hyvid potions we didn't make it too easy.

Tyler: The big green missiles make it pretty clear what is coming

Tyler: The egg pods getting more health should bring back some challenge, but we will definitely be focusing on the Hyvid frontier in the next few months.

Tyler: Guy and Andrew slayed a couple stealth code demons to fix this one - with some help from QA and Tim and Jason's bots to reveal where the demons were lurking. Alpha 2 will hopefully reveal the next wave of these types of code demons - which only appear amongst large crowds of players.

Tyler: Sorry about the whole -- "Oh, an awesome drop...Doh!" Players seemed really patient and understanding about it. Thank you. We have just gotten started making custom legendary items. We want these to inspire a variety of character builds: "Wow, now I really should get items that do X, dump more points into that Y skill and maybe even switch to that other relic weapon." Our first pass on making these legendaries included some technical mistakes. We've fixed those.