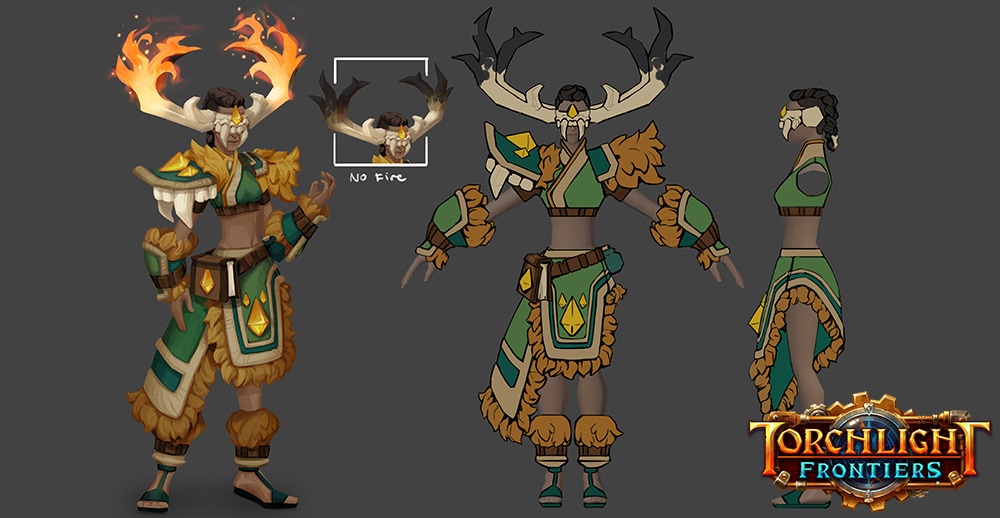 We’re going to share the vision for several major game features in the coming weeks and months. The right place to start is with what we call “Horizontal Progression.” We’ll be explaining how power progression is tied more directly to gear (instead of character levels), and how different “Frontiers” have their own progression & end game.

A few days back we shared the Hyvid Frontier area with the folks at Gamespot, and explained about Horizontal Progression. Be sure to check out their impressions in this video before diving into the dev details below!

Rest assured there are more features that give power and build diversity to your character than just gear. We’ll be announcing more about those soon. Understanding the core gear to power relationship will set the stage for these other features being revealed.

Torchlight Frontiers’ content will change and grow over time, allowing new avenues for character development and progression. However, early in development we thought a lot about how moving the player power goalpost feels bad. Many MMO players experience this when an expansion comes out: the level cap is raised and your hard earned raid gear suddenly becomes useless. This also sucks as a developer to see your “old” content become irrelevant to the majority of players, and was something we started thinking about how to avoid.

Since we’re currently in development and can look at what has worked in current and past RPGs, we’ve decided to design the core progression of Torchlight Frontiers to be less about sitting at the top of a mighty power mountain, and more about building different kinds of power that won’t be invalidated by the next new thing. Adding content shouldn’t move the goalpost, but provide exciting new stuff for elder and early game players alike.

We’ve come to call the approach “Horizontal Progression.” Horizontal progression is not a specific feature, it’s a way of looking at power growth that creates a great game for the long term. For each feature we think about how it will grow both vertically and horizontally. When this works, there are some big benefits: ​

Different areas of the world focus on a specific subset of mechanics that enemies are using against you. We call these areas…Frontiers! You’ll need the right tools for the job to progress in each Frontier and overcome its big challenges, but all of them will be available to you after our initial starter quests. The tools you use to progress in a Frontier come from your active and passive skills, your gear collection, your pet’s abilities, and at least two more awesome features we haven’t announced yet.

Let’s go a bit deeper with how gear is part of this progression:

In the Goblin Frontier you’re building gear that defends against fire & physical damage. You’ll be selecting the damage types, build mechanics, class skills and support powers that best deal with those goblin encounters. In the Hyvid Frontier, you’ll be sporting a different gear load out, optimizing for poison defenses, and selecting the build & support mechanics for slaying bugs. Each Frontier will support varied gear and build options, and we’ll be adding more before launch and into the future.

What I like is that I have a variety of challenges to face and keep expanding my character over time to have different power. In many games the “answer” to character building is to max out Stat X, and if that number is high enough you can beat Big Bad. Sure, you can roll a new character a pick a different Stat X to chase, but you’re still facing the same challenge, and you have to play the whole game over again to try a new way of play. In Torchlight Frontiers I get to explore and collect different flavors and ways of playing my character, and have a bunch of different Big Bad challenges to think about facing.

Scaling is the magic that makes gear collection “horizontal”

In a vertical design your high level characters just wipe out anything low level. In Torchlight Frontiers we want playing anywhere in the world to be engaging. We want to reward you for time played relatively evenly, rather than lump the largest time-value rewards only at the endgame. We want playing in the early levels of a new Frontier to feel a little like leveling up and building out your character again, without losing the progress you made in all the other areas of the game.

We achieve this with the magic of dynamic gear scaling. It’s a trick I first saw in Guild Wars 2 and I loved how it kept the whole world interesting and rewarding to play in for me even at max level. In Torchlight Frontiers your high level gear is dynamically scaled down in power when you enter lower level zones. You keep your skills and affixes, but your stats come down enough to keep the gameplay entertaining.

Scaling is also used to reinforce the “different progression” feeling when playing in different Frontiers. Gear that drops in Goblin Frontier is aligned to that Frontier (you can see it clearly in the tooltip) and it scales favorably when moving around that Frontier. You’re a bit ahead of the monsters’ level.

Take that same gear to the Hyvid Frontier and it scales worse - you’re behind the monsters’ level. You have some useful stats, but it’s clearly better to start collecting gear from the local Frontier if you want to progress at a good pace.

Since player power scales this way, we can balance the loot drops so you don’t feel like you’re wasting time playing in lower level areas. You won’t find high level gear, or the rare end game crafting materials, but you’ll get gold and skill points and other useful stuff at a meaningful rate. Not only is this great for keeping the whole world relevant and fun to play in - it means jumping around to where your friends are is rewarding and a great way to spend time.

Note that gear does not scale up in this system. You still want to push your collection ever higher in level and stat rolls so you can delve deeper into each Frontier and vanquish the deadly bosses at the end.

Horizontal progression is so much more than gear

I mentioned earlier that there’s a bunch of big features and details about the game we want to share. At this early stage we want to get the vision for the game across so players can see where we’re going with things like “no levels” and Frontiers and dynamic scaling. The next few features we reveal will build on this foundation I’ve just laid out. We have so much more to tell you! It’s not just gear that we’re designing to support “different power”; we have lots more ways you’ll collect tools to help tackle the challenges of Torchlight Frontiers.

Tyler Thompson, project lead on Torchlight Frontiers, will be doing a live stream this coming Monday at 11am PST. Get your Horizontal Progression questions ready and come hang out!