Lu, the demon monarch, emerges in Elrios as a small child, having used all her mana to escape captivity in the realm of demons. She has lost all her power and possessions due to her subject’s betrayal.

Ciel, the mob hitman, finds Lu in her weak state and takes her in. Her name is all she remembers. Before long, assassins from the demon world come for Lu, and Ciel gives his life to protect her.

Just then, Lu remembers everything. A mystical contract allows her to revive Ciel as a half-demon, and he is bound to serve her in return. And soon, with Ciel’s help, Lu will take everything back.

Together, they are Luciel, a dangerous duo in pursuit of demons that plague the land.

Luciel is Elsword Online’s innovative, dual playable character with its own unique features: 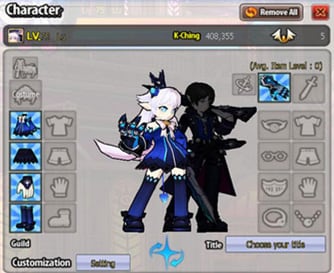 This third source of power for Luciel is used exclusively for combination skills. The gauge fills up when you use switching skills, up to a maximum of 10 points.

Celebrate Canada Day and 4th of July in Elsword!

Note: All schedules are in Pacific Time (PDT).