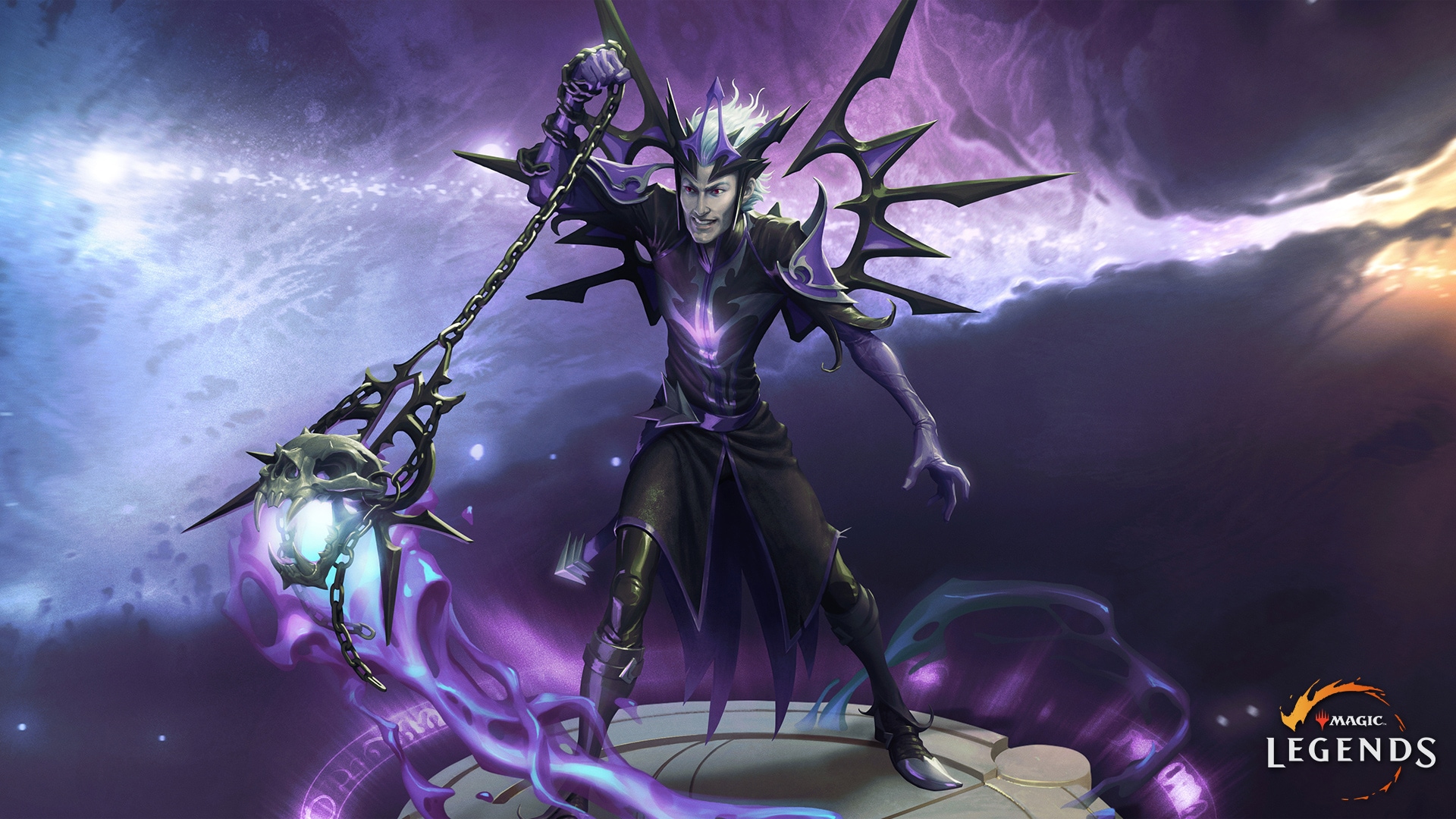 Allow us to introduce the Necromancer class for Magic: Legends! The Necromancer is themed on the core values of black mana from Magic: the Gathering, personifying sheer power and embracing death and decay.

The Necromancer is incredibly resourceful and focused on acquiring might however they can. They use the potency of darkness to raise minions from the dead, manipulate the flow of life energy, and make sacrifices in order to benefit their party during combat encounters. Thematically, Liliana Vess, one of the strongest and most popular Planeswalkers of all time, served as an inspiration for the power design. 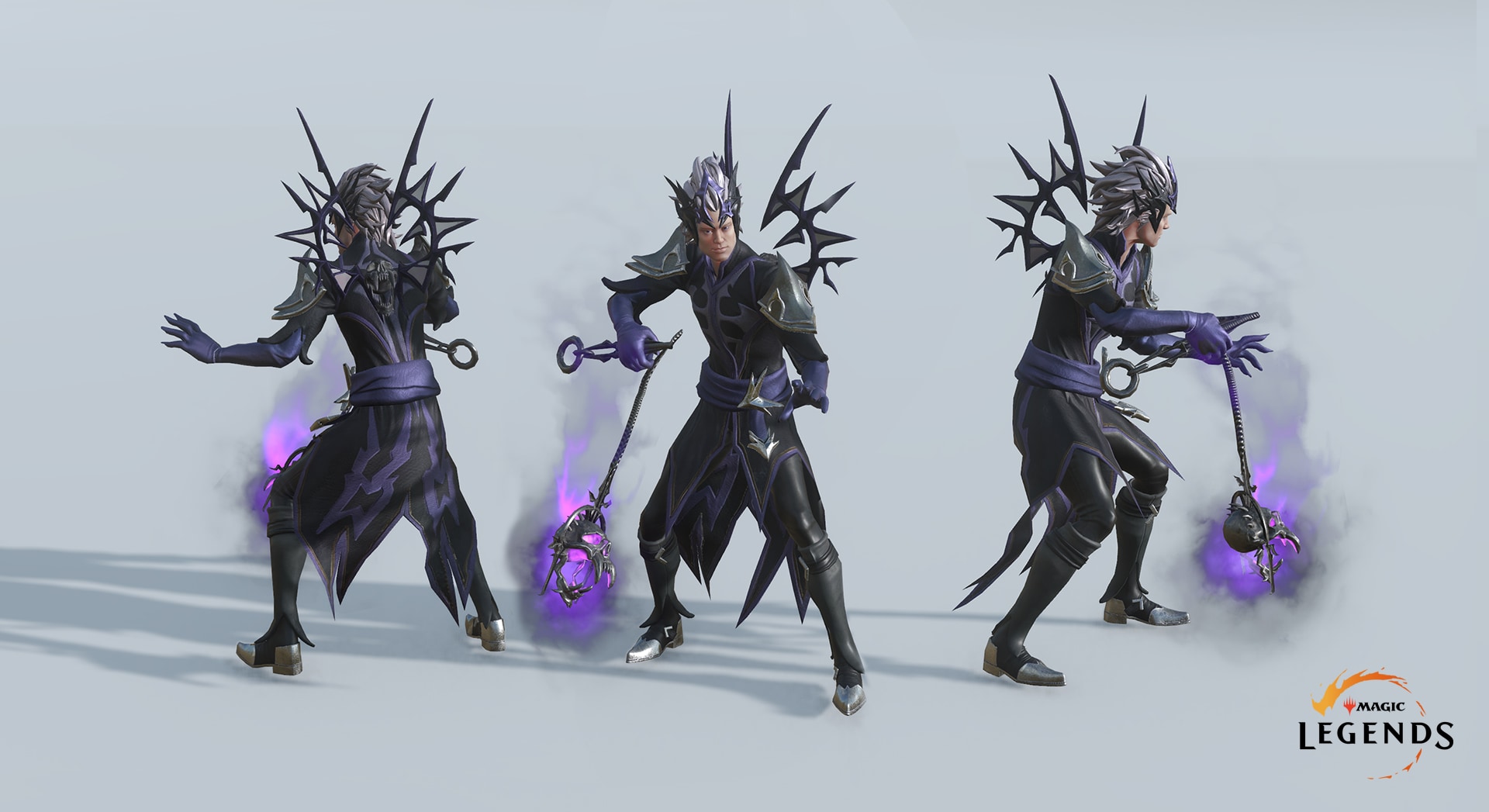 Like our other classes, the primary goal of the Necromancer’s design was to make sure it delivered on the black mana Planeswalker fantasy. Therefore, the first step was to understand the traits that define black mana in the card game source material and translate it into a unique set of abilities. Mechanics that speak to the extreme power of black mana include reanimating the dead, debuffing curses, and the sacrifice of allied creatures for various benefits, many of which players can expect to see at play in the Necromancer’s abilities, perks, and starter deck.

The core gameplay of the Necromancer is focused on maintaining a constant balance between life and death, loss and gain. Between summoning creatures and sacrificing them for benefits, they gain massive power that reinforces their individual and team efforts. Necromancers deal damage by gradually siphoning the life of their foes via Damage-over-Time (DoT) effects, and receiving Healing-over-Time (HoT) effects in return.

The Necromancer’s primary ability is Grim Siphon, a mid-range lashing attack that deals damage and applies a DoT effect to the foes it hits while applying a HoT to the player. Grave Upheaval, their secondary ability, deals damage to target foes and summons two skeletons to aid the Necromancer at that location. Soul Wither, their utility ability, rounds out their abilities in a truly spectacular way. Skull-shaped clouds of black mana emanate from the player in a circle, applying a slow effect and a DoT effect to nearby enemies. Players are able to move through the slowed enemies while they are healed for a percentage of the damage dealt by the DoT effect.

Playing the Necromancer gets interesting when the player finds the perfect balance of gain and loss to sustain their pendulous cycle of decay and rebirth. For example, a player can summon several creatures, spend life to draw a spell, and then sacrifice one of their creatures as fodder to simultaneously heal the player and buff another of their summoned creatures. The Necromancer can sacrifice a stronger creature for even greater effect, then expend life to summon something even stronger. They can then siphon health from an enemy to top off their health and start the cycle anew. Maintaining balance is a dangerous game, but it positions the Necromancer to unleash uniquely devastating attacks on their foes. 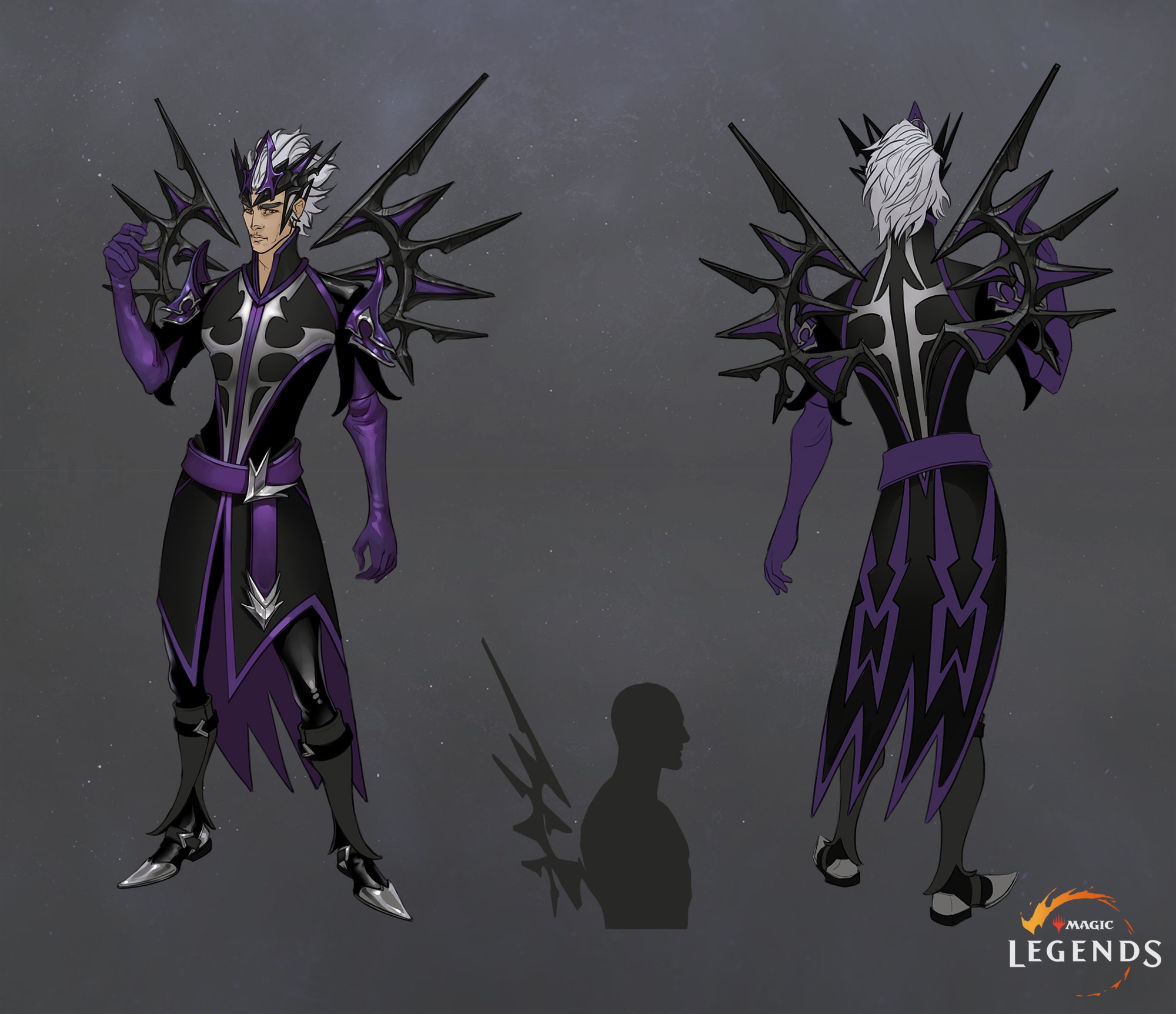 When we started work on the Necromancer’s visual presentation, we wanted to capture the intensity of black mana. Black mana focuses on the acquisition of strength through the manipulation of life forces, so we wanted to make sure they looked imposing yet refined. We wanted their capacity for power to stand center stage in a fashionable way, so we put them in an expertly tailored outfit made of the finest silks and leathers. The Necromancer wields a censer, a unique weapon which is shaped like a skull and imbued with the power to curse foes or drain the life essence of creatures that threaten their allies. We added pitted black metal adornments to their back to give them an edge, and a gothic, almost crownlike headpiece that speaks their might. These were designed to add a bit of eeriness and a hint back towards death itself. We took cues from old gothic cemetery fences and crypt gates to give them a distinctive vibe.

The VFX and animations for the Necromancer speak to their power source, making it look as though souls are being pulled up from the ground. The censer gets whipped and dragged along the ground dramatically to create vicious strikes as dark purplish fumes billow out from the black mana held within. Thick smokes and ethereal skulls further reinforce a formidable presence while the physicality of zombies and skeletons bursting through the ground plainly displays the Necromancer’s overwhelming power.

The resulting character is a mid-range damage dealer who manipulates the forces of life and death through their summoned creatures and foes to great effect. They masterfully obliterate enemies through strategic power play involving the life forces around them. They are equally capable solo or in a party and can be customized to devastating effect via the Loadout and Deckbuilding features.

We hope you enjoyed the reveal and look forward to seeing how you customize your Necromancer builds in Magic: Legends! Follow our Twitter and Facebook to stay up-to-date with the latest news. Make sure to join our official Discord server as well to chat with the devs and other fans like you!