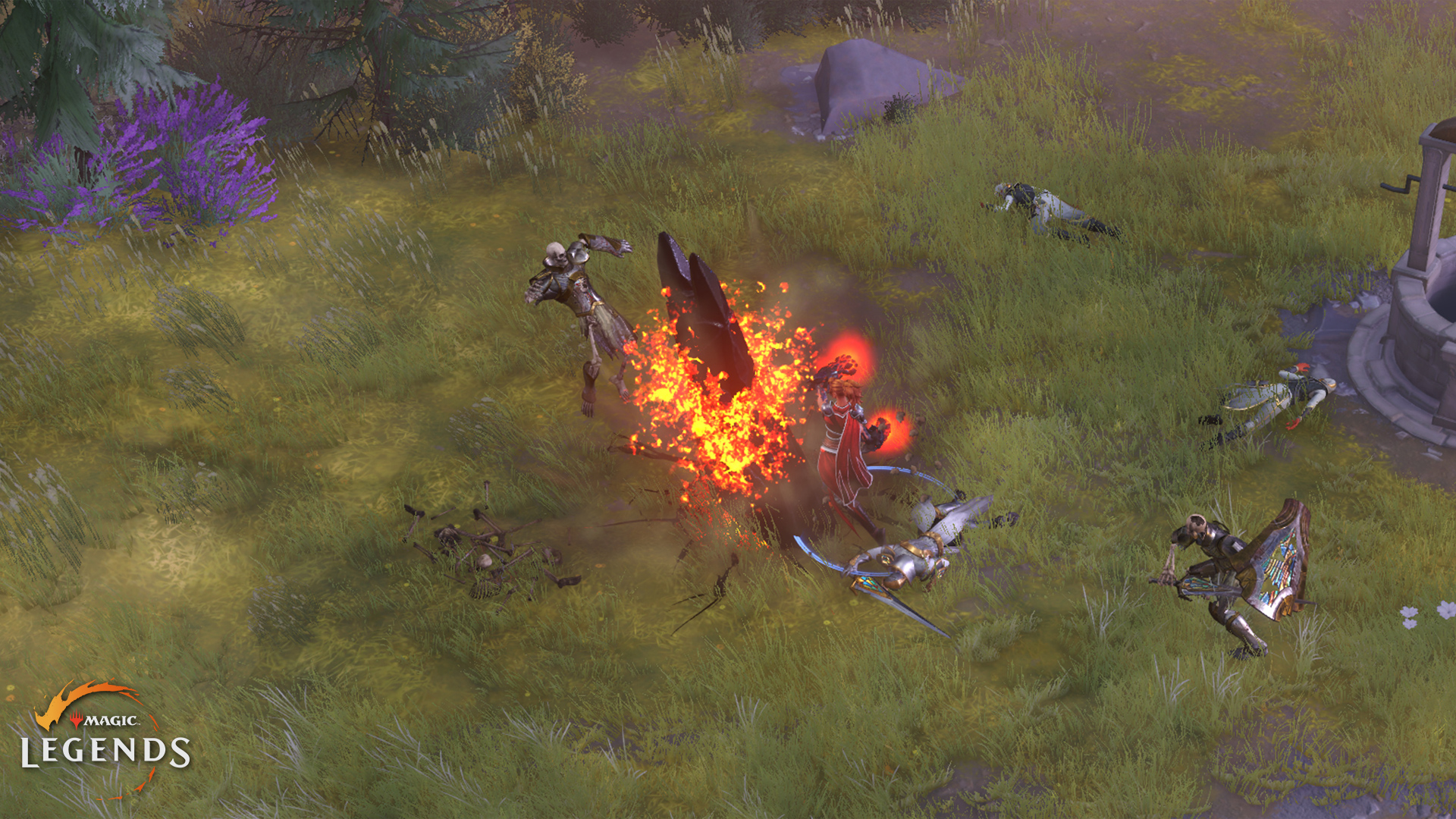 In designing the systems for Magic: Legends, our primary goal is to ensure that players get to explore the Multiverse as the planeswalker of their dreams. Strategic deckbuilding and tactical combat serve as the moment-to-moment gameplay experience; however, we expand on that via several character avenues of progression. Today, we are going to share information about a couple of the progression systems that set us apart from other ARPGs and online titles, specifically class progression and traits.

It all begins with the player selecting a starting class. This choice determines the initial play style of their character as well as their combat abilities and innate benefits. This decision will also determine each player’s starting deck of spells. The great thing about this is that it is truly only the beginning of the player’s journey as a planeswalker. Closer to release, we’ll discuss how players can unlock more classes. To read more about the way class playstyles vary, see our previous blogs on the Geomancer, the Mind Mage, and Beastcaller, and keep an eye out for more class reveals in the future!

Like a majority of ARPG titles, players gain experience (XP) by completing various missions and quests throughout their journeys. When a planeswalker earns a sufficient amount of XP, they level up. Characters get stronger as they level up, gaining more hit points and dealing more damage as they go.  Upon reaching milestone levels however, players unlock class features: enhanced class abilities, class perks, and class traits.

Ability Upgrades are unlocked fairly early in class progression and serve to modify the core abilities that define the playstyle of a given class. They empower the Primary, Secondary, or Utility Ability by increasing its potency or adding an additional effect. For example, upgrading the Geomancer’s primary ability, a combo of melee attacks, causes a stone spike to jab out of the ground on the final hit, which both increases the ability’s area of effect and the amount of damage dealt.

Class Perks are passive boosts that are unlocked a bit later than Ability Upgrades. We designed them to provide class-specific boosts that enhance the character being played as long as they remain in that class.

Here are two examples of the Geomancer’s Class Perks: 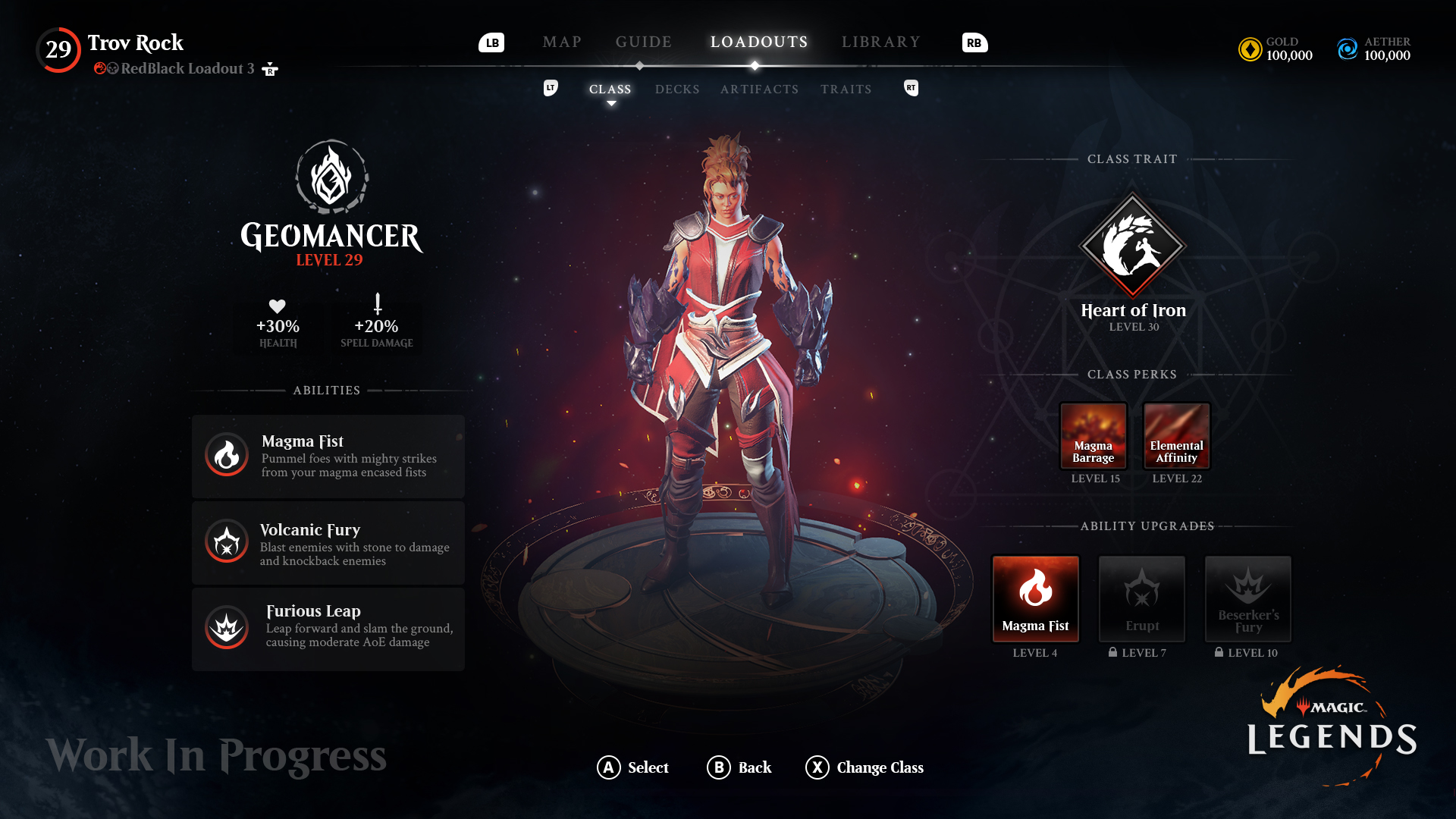 Upon reaching maximum level with any given class, players will unlock the class’s Trait. This is a larger passive power that can greatly enhance a player’s gameplay experience. Whereas Class Perks are tied to a specific class, Traits are slottable powers that can be placed in an open Trait slot on a character, regardless of the current class being played.

Traits are more than a boost, they’re a crucial part of the player’s loadout. A clever combination of Traits, Artifacts (which we will cover later this month), and spells can create devastating synergies and bring home the power fantasy of being a planeswalker. *Please remember, all Traits are in active development and may be subject to change. 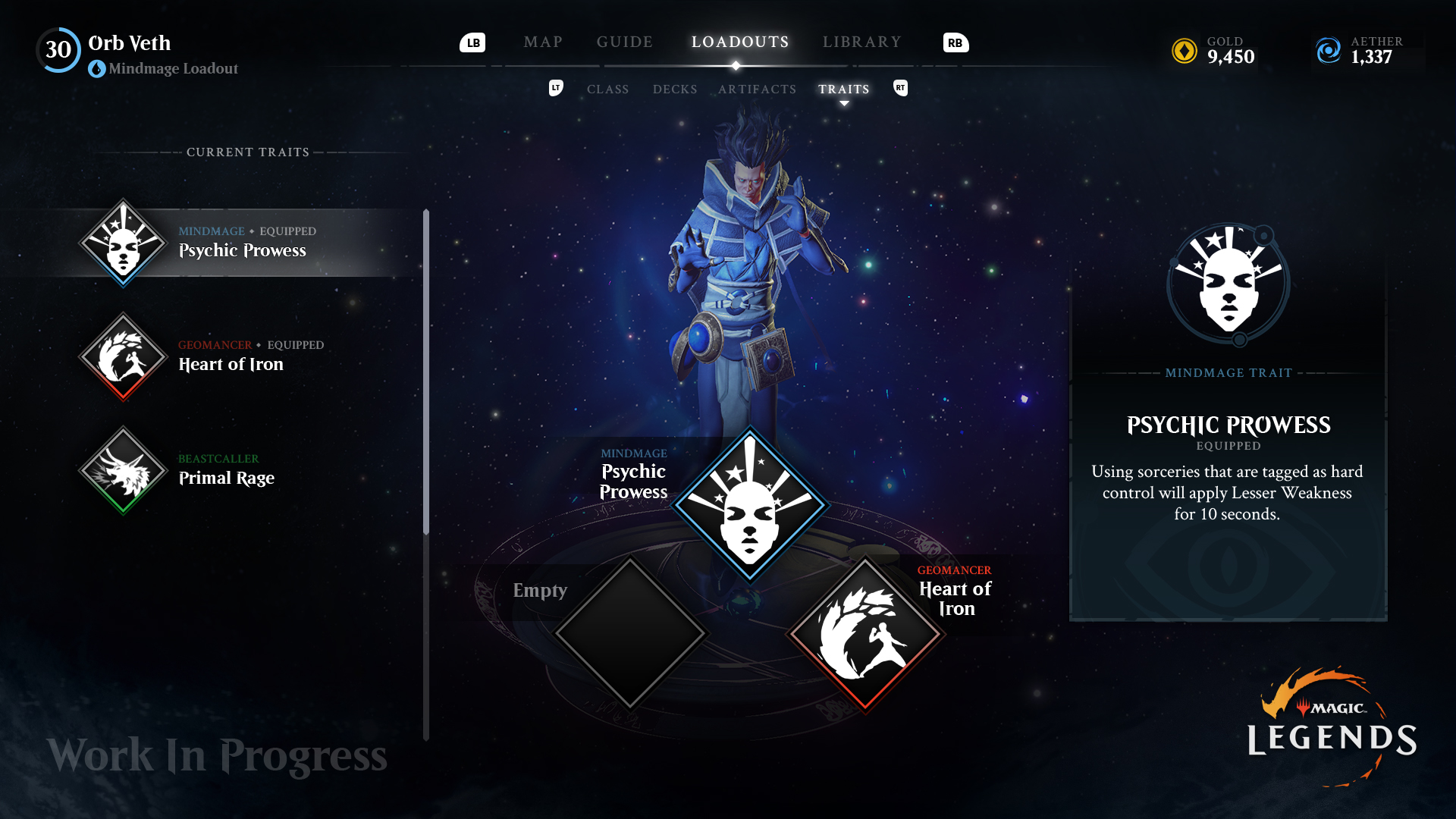 As mentioned earlier in the blog, the class a player selects defines the playstyle. Players unlock their first class at character creation, and they utilize that class during the early portions of the game. Throughout their adventures across the Multiverse, players will be able to unlock more classes, each of which has a unique trait.

Each one of these classes comes with a unique trait. In order to fill their character’s trait slots, a player will need to reach maximum level on several classes. Every class starts at level one and must be leveled independently, however the player’s spell library and other forms of progression are not reset. Customizable aspects such as Traits and Artifacts are shared across all unlocked classes as well. This makes leveling subsequent classes easier as players have more power to bring to bear, more synergies to enjoy, and more knowledge and experience to use to crush their enemies.

Magic: Legends is still in pre-alpha development, so numbers and details are subject to change. That said, this is still just the tip of the proverbial iceberg and we have much more to reveal. Over the course of the month, we’ll be revealing more about the systems that make Magic: Legends a unique experience that stands apart from other ARPGs. Keep an eye out for our coverage on other gameplay systems including how we are incorporating the card game’s iconic Artifacts into Magic: Legends! 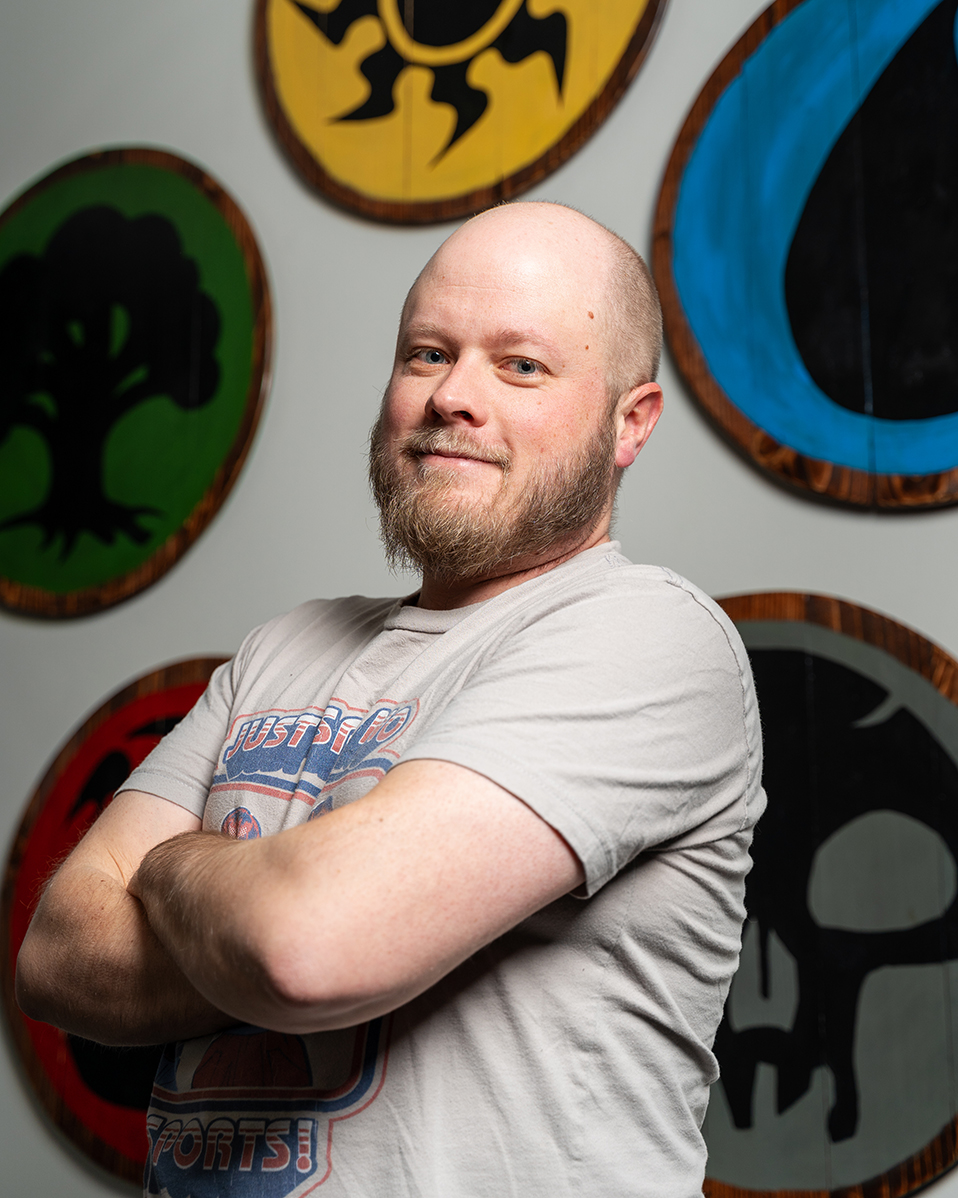 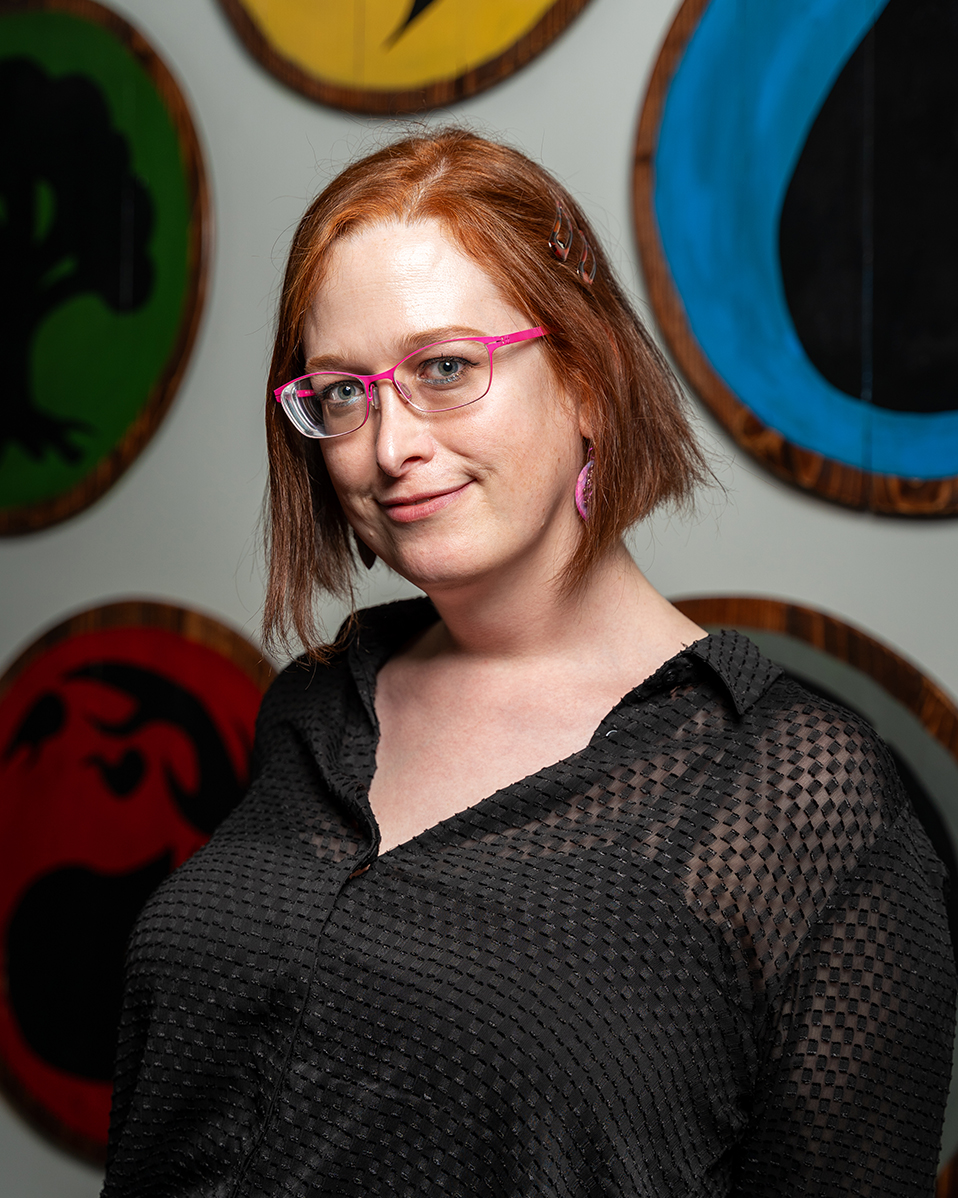