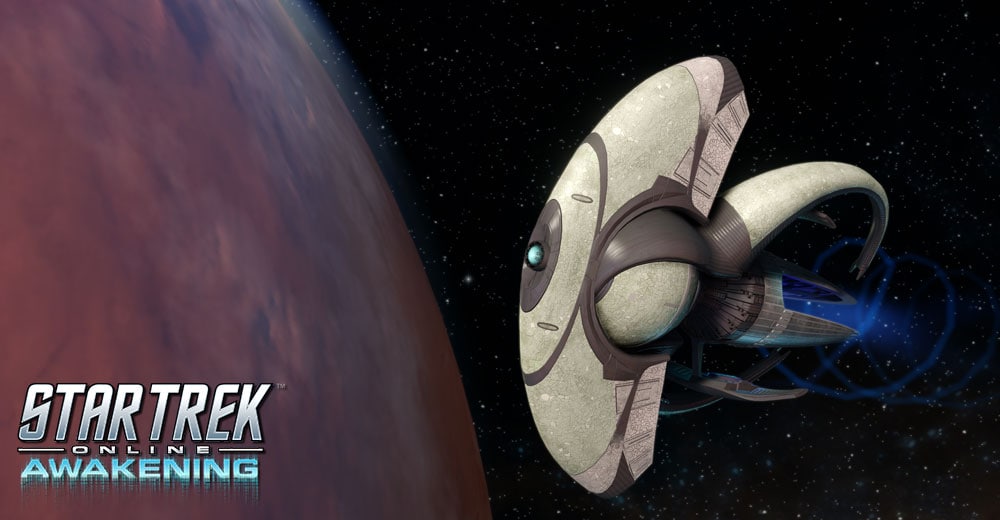 From December 3rd to January 2nd, we are running a promotion that will provide an additional bonus when opening a Research and Development Pack.

We are excited to announce a new addition to this Promotional Ship Pack: Vulcan Experimental Scout Vessel!

Also known as the Jellyfish, this exciting vessel uses both new and old tricks, like Red Matter and Pilot Maneuvers, to keep it a Slippery Target. It also features a new Torpedo Launcher as a powerful defense mechanism.

** Complete stats/abilities of the Vulcan Experimental Scout Vessel are included at the end of this Dev Blog – keep reading for more information!

The Vulcan Experimental Scout Vessel began as a highly maneuverable vessel, built by the Vulcan Science Academy to serve as a test bed for various experiments and scientific exploration. These plans of peaceful experimentation were disrupted when it was dispatched to attempt to prevent a supernova, dragging it into a reality-shaking series of events. The Jellyfish, as it became known, more than carried its weight in these events, with incredible maneuverability to keep it safe and torpedo launchers as a primary defense mechanism. The red matter it carried was eventually used - to devastating effect.

This Starship features a Commander Science/Pilot Station and a Lieutenant Universal/Miracle Worker Station.

The Vulcan Experimental Scout Vessel comes equipped with the Eject Red Matter Universal Console. Activating this console will fire a canister of unstable red matter towards the target. While not a sufficient mass to create a self-sustaining black hole, the collapsing anomaly formed this way will unleash powerful blasts of gravity at everything nearby. Foes affected by these blasts will be suddenly drawn towards the center point, and the gravitational pull is so strong that it will begin to move other, less powerful anomalies towards the center point as well.

This console also provides a passive boost to Phaser Damage and Starship Particle Generators. It can be equipped in any console slot, on any ship. You may only equip one of these consoles.

While this trait is slotted, when you activate any Pilot Bridge Officer Ability or Auxiliary to Dampeners, you gain a significant amount of damage resistance vs nearby foes, and will placate any nearby foes who critically hit you.

The Vulcan Experimental Scout Vessel additionally comes with a Quad Micro Photon Torpedo Launcher. This weapon fires like a standard photon torpedo launcher, but with a higher than normal recharge rate.