As our new Module takes you deep into the hidden depths of the Lost City of Omu, not only will you find dark threats and dangers untold, you will unearth many rare and valuable rewards!

Having proven yourself as a survivor and a worthy adventurer, the Chultans are more willing to sell their prized weapons for your excursion into the Lost City.  There are three new Artifact Weapon sets that are available for purchase!  In the Zen Store, we have the new Pilgrim weapon set that benefits you depending on how many enemies you face.  The new Pioneer set that benefits you on how many allies you have can be found in the Chult Campaign Store.  The last weapon set that can be purchased is the Primal set in the Seal of the Brave store, which set bonus helps you when you take noticeable amount of damage.  With these weapons available to you, you will be prepared for the trials that will face you in Omu! 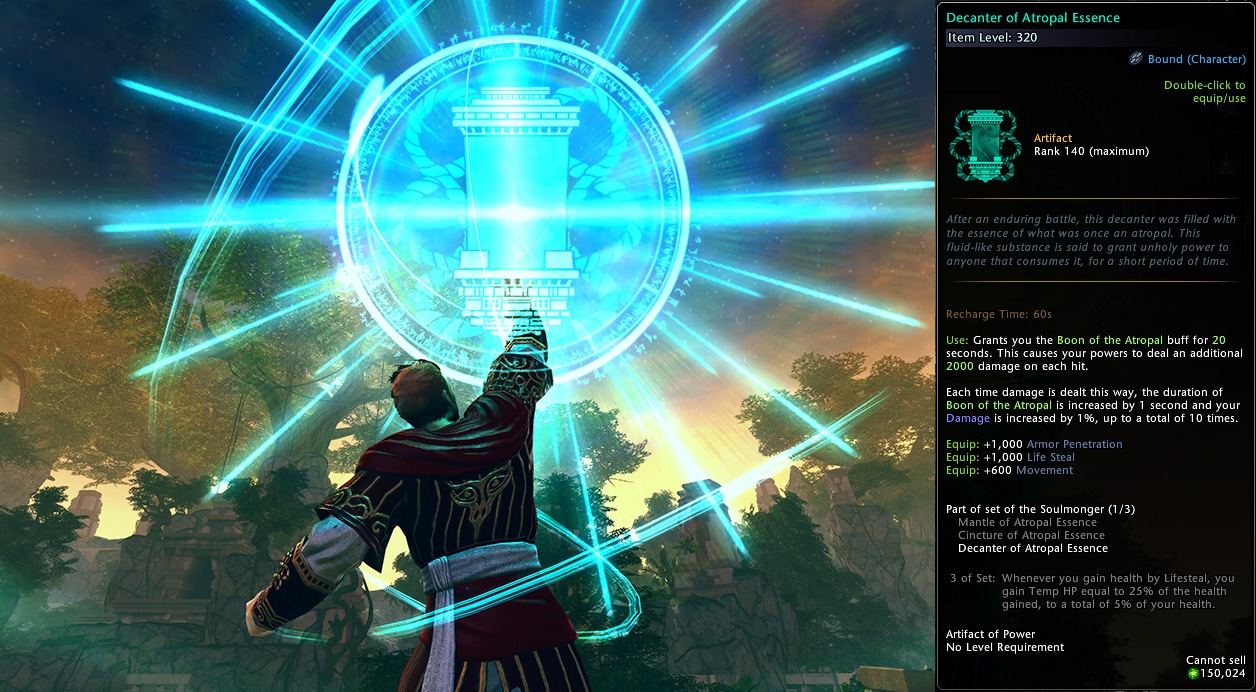 In the depths of Omu you will find our newest Trial, the Cradle of the Death God.  If you can survive the decent into this dangerous Trial, there are many prizes for the taking.  Besides seals, gear and refinement points, we have a brand new artifact available, the Decanter of Atropal Essense; when used it infuses you with the power and destruction of the atropal.  You can also find a new artifact equipment neck and waist to complete the Atropal Artifact equipment set. 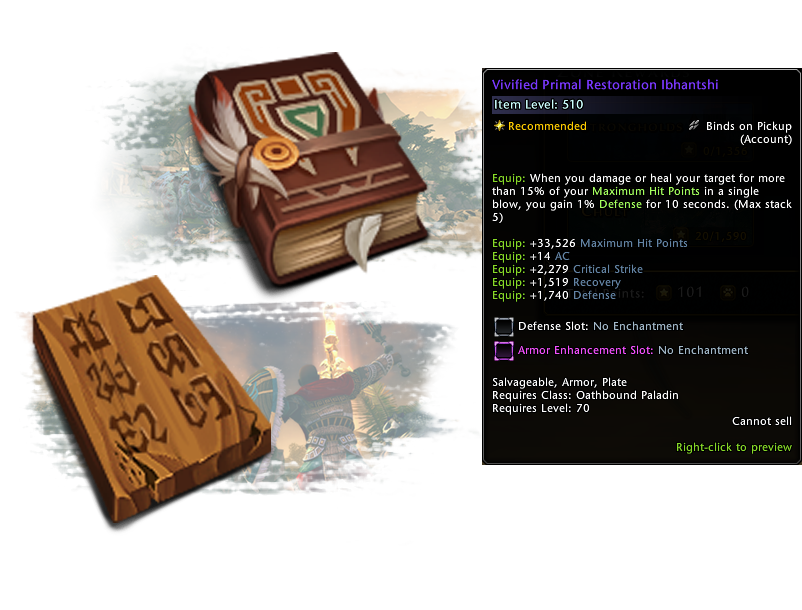 But that isn’t all.  The Cradle carry many priceless items that scholars and vendors in Port Nyanzaru will find valuable.  The Historian Aelena Asterion found at the port of Port Nyanzaru has heard of Omuan Carvings that hold great knowledge of the lost city and she is willing to trade these carvings for testimonies of the brave warriors of Chult.  These testimonies can help you unlock the hidden powers of your Primal gear, vivifying them to their highest potential. 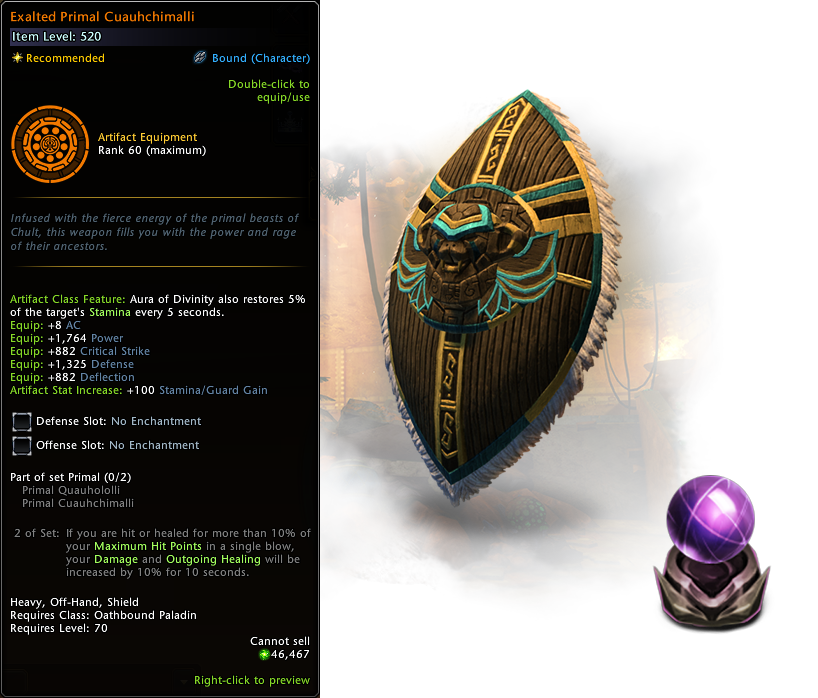 Another item of interest in the Cradle are Soulmonger Ampoules.  There is a mysterious artificer in Port Nyanzaru who is very interested in these ampoules, and he is willing and able to use them to infuse any of the new Module 13 Chult weapons.  He claims that this process will increase the weapon’s abilities, making them even better – stronger, powerful, better!

With the ways to Omu opened, the hunters of Chult make their way in search of bigger, more dangerous prey and the rewards that come with them.  Our new Omu Hunts have new gear and rings for those that risk the danger.   But the tough hunts also carry valuable artifacts; two additional artifact equipment necks and waists, which will complete the Serpent and the Skull Lord Artifact equipment set.  However, the biggest hunt in Omu bares the greatest rewards, including a new Artifact Weapon set; the Tyrant set which bonus gets better the longer you stay in battle.

Taking It to a Whole New Level 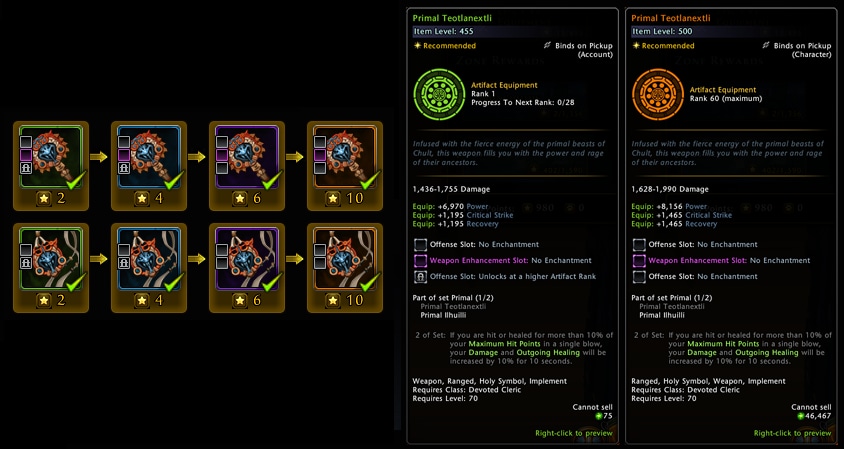 Omu is waiting for you! There’s even more rewards available as you explore Omu, from the Heroic Encounters to the connections and trades you make in Omu.  From new unique potions and gear to brightly colored mounts, there is so much for the taking!  With all these rewards waiting to be claimed, we hope you find Omu a land of great opportunity and promise!