At Last, the Eisenberg 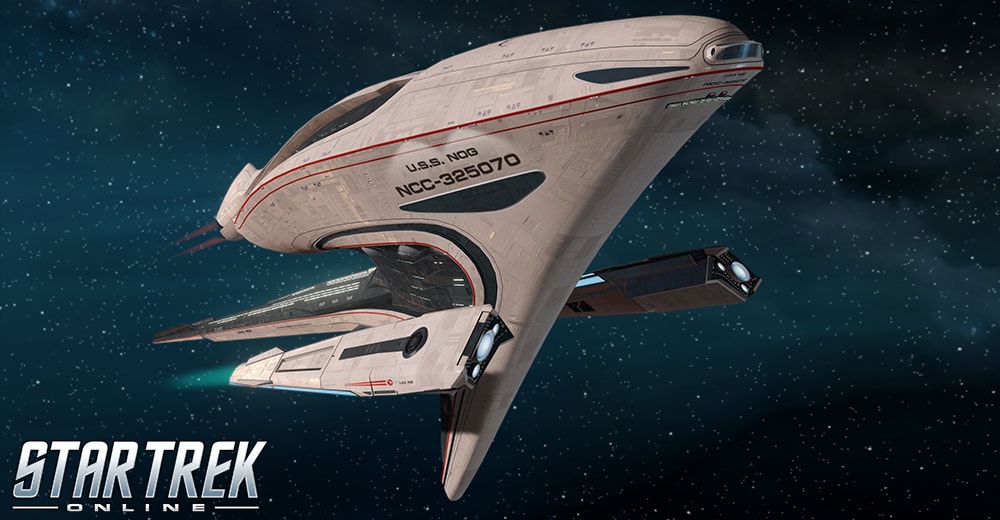 It’s almost that time of year once more, where equal measure of festivity and frivolity join forces with shenanigans and mischief, for the 2021 edition of Q’s Winter Wonderland! This year’s Grand Prize for participating in the Event will be none other than one of the many unique and innovative Federation starship designs pulled across time from the distant future. But this time only, this Federation vessel is being made accessible to all captains, regardless of their original allegiance.

We’re thrilled to be offering all captains the opportunity to earn their way to flying their very own Eisenberg Star Cruiser [T6]. Named in honor of one the many inimitable actors to have graced the Star Trek franchise, as well as a friend and ally to Star Trek Online, this starship can be yours simply for participating in the seasonal celebration we have created for your enjoyment.

Earning the ship will require completing various activities available on the Q’s Winter Wonderland map each day, and gathering enough Daily Progress to fulfill the Winter Event’s overall quota. Players may participate in any of the available Winter activities to earn their Daily Progress once per day, per account.

Once you have earned sufficient Daily Progress, you may claim this Starship for your entire account. Just open the Event Reclaim Store to claim an Eisenberg Star Cruiser [T6] for each captain on your account.

The versatility and ingenuity of Federation starships are dangerous to under-estimate, and that is no exception with the efforts that have gone into the development of the Eisenberg-class Star Cruiser. With a focus on exploration and scientific discovery, this vessel's design was intended to usher the Federation into a new age of discovery, before the fleet ended up decimated by a catastrophe that left Starfleet scrambling for resources. In the wake of that disaster, it was heroic captains of vessels of this class - such as the U.S.S. Nog - that kept the spark of hope alive.

True to the Ferengi doctrine of utilizing one's own self-interest to the benefit of many, this console has been engineered to remove materials and components from those who may currently have a surplus (in this case, enemies) and redistribute it to where it is needed most (in this case, allies). Utilizing a massive network of tight-beam transporter beams to strip away enemy hull at a molecular scale, this technology will buffer that matter briefly, then convert the stripped matter into energy that is projected into a protective barrier that can be applied to allied starships even at a great distance.

This console also provides a passive bonus to Starship Drain Expertise and All Subsystem Energy Levels.

Activating any Specialist Bridge Officer Ability (Intel, Command, Pilot, Temp Op, Miracle Worker) will briefly grant your starship the ability to redirect incoming damage from Energy Weapons into Shield Restoration. A portion of all Energy Damage received during this time (pre-Resistances) will be translated into Shield Restoration for the shield facing which the enemy weapon impacted.

Triggering this effect multiple times before it expires will refresh the effect's duration, rather than increasing the amount of shield restoration.