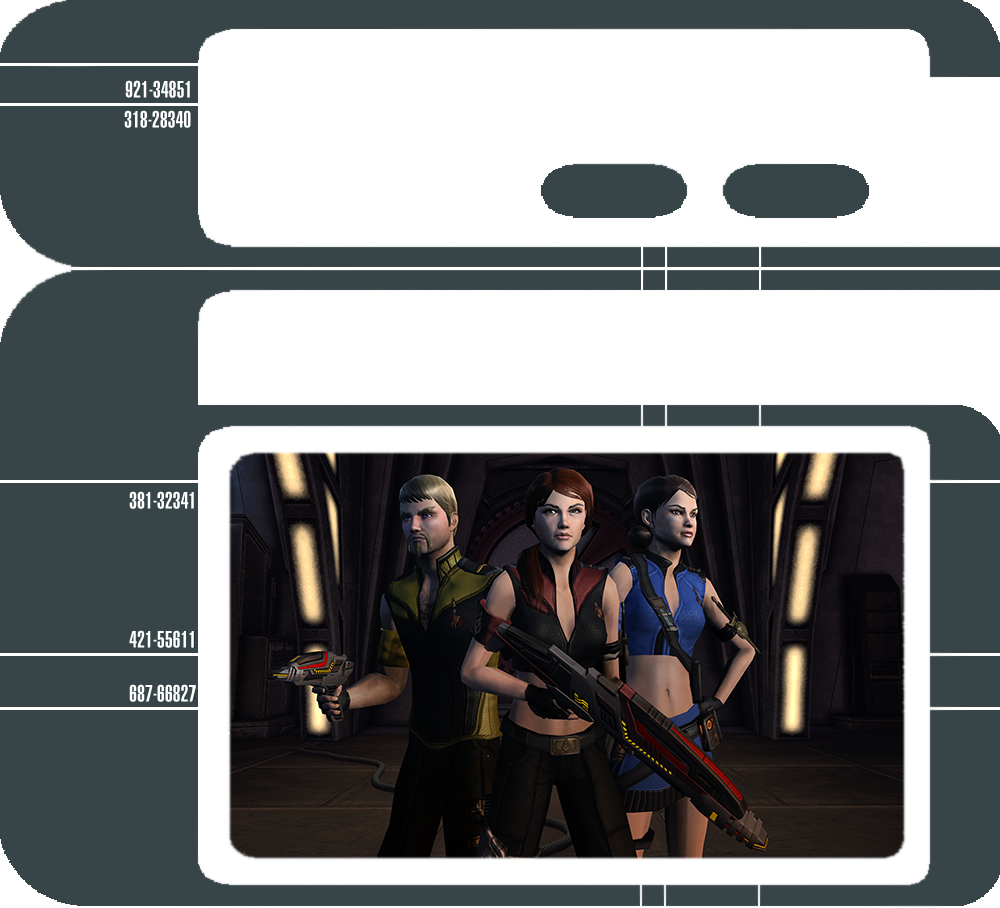 The Tholians and the Mirror Universe have long been inextricably tied together, with the phenomena of interphase and dimensional travel being hallmarks of Tholian space and influence. The ambitious incursions of Terran Empire forces have brought allied forces into contact with the technology from the other side of the looking glass, including some of the advanced technology that the Mirror Universe has acquired from its own future counterparts. Simultaneously, the Tholians have been present at nearly every incident of temporal shifting or dimensional instability, with rifts to the Mirror Universe never far behind. Examples of both forms of enemy technology have already come under research, with an eye to learning how to use Tholian ships to safely traverse interphases, and how to learn from the advances in Mirror Universe technologies. Many of these advances are already coming into field testing, in hopes of providing parity against enemy forces.

By opening one of the new Mirror Incursion Lock Boxes, players will have a chance to win the Tholian Tarantula Dreadnought Cruiser [T6]. This enormous ship is the linchpin of the Tholian fleet, built by the reclusive crystalline entities to stand up to anything that the galaxy might throw at them.

The Tholian Tarantula Dreadnought Cruiser [T6] comes with a Web Cannon console, which snares enemies caught in the front of the ship when it fires its devastating blast. The tractor-repulsor webs then constrict the ship in a damaging grip.

The Mirror Incursion Lock Box also includes a chance to win the Tholian Mesh Weaver Escort. This nimble T5 ship is designed to harry enemies while keeping them hemmed in with web walls.

The Lobi Store now offers the Paradox Temporal Dreadnought [T6]. This Mirror Universe ship is one of the most powerful ships in the Terran Empire’s fleet, using advanced technology from the future to be both durable and nimble. This ship includes a Lieutenant Tactical/Command seat and a Lt. Cmdr. Universal/Intel seat, for extraordinary flexibility.

The Paradox Temporal Dreadnought [T6] includes a Temporal Rift Stabilizer, a console that generates temporal anomalies along the forward line of the ship. These anomalies slow enemies and cause kinetic damage as they warp and destabilize the timeline.

In keeping with the captured Tholian and Mirror Universe technology included in this Lock Box, the Mirror Incursion Lock Box includes the chance to acquire the Web Snare Console, which fires a compressed beam of tractor-repulsors that forms a massive web. Unlike a typical Tholian web wall, however, this web captures ships that fly near it, and then entangles and crushes them while making them “stick” to the wall.

A new set of Genetic Sequencers (Trait Unlocks) can be obtained from this lock box, following the theme of Terran tactics and technology. Each of the following four (4) Trait Packs can be obtained by Captains:

Alliance engineers have also salvaged some examples of advanced Terran Empire technology in the form of Terran Empire Kits. These Terran Empire Kit Packs grant you a kit appropriate to your career and level. In addition to offering standard skill bonuses, each kit frame also enhances the duration of your Control-type powers.

Terran weapons have fallen into the hands of Allied forces as a result of the current incursion, and some of them have made their way to the front lines. These brutal phasers include Terran Empire agonizer technology, which has made their use controversial, but the chaos of the recent wars has made regulation difficult. Players can acquire Terran Empire Agony Phaser weapon packs. Opening a pack allows a choice of a beam, cannon, or ground weapon. Beam weapon packs grant either a beam array or a dual beam bank, with a small chance of a 360-degree beam array. Cannon packs include a turret, single cannon, dual cannon, or dual heavy cannon, with a small chance of a wide-angle dual heavy cannon. Ground weapons grant either a Terran agony phaser stun pistol or a multibeam rifle, and have a distinctive Terran Empire look.

Captains can purchase Mirror Universe Uniforms, including variants of the Odyssey, Bortasqu’, and Romulan uniforms as worn by their Mirror counterparts (available only to characters of the appropriate faction). Additionally, a special set of Jupiter Terran Empire Uniforms adds more variants, including Admiral Leeta’s Mirror Uniform pieces.

Finally, the Mirror Incursion Lock Box can include any of a number of bonuses and boosts, potentially including any of:

The Mirror Incursion Lock Box and its additions to the Lobi store will debut with the arrival of our new anniversary celebration, starting January 28, 2016, at approximately 10:00 AM PST.